Update Required To play the media you will need to either update your browser to a recent version or update your Flash plugin.
By Brianna Blake
2010-4-2 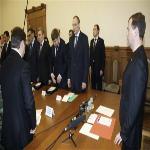 In Russia this week, a series of suicide bombings increased concerns about terrorism. Russian President Dmitri Medvedev made a surprise visit Thursday to the North Caucasus. He called for more severe measures to fight terrorism. President Medvedev also recognized the importance of Islam and Islamic leaders in the Caucasus.

Mister Medvedev's comments were televised from the republic of Dagestan, where two suicide bombers killed at least twelve people Wednesday.

Earlier Thursday, officials reported two more people in Dagestan were killed in a car explosion. Police say the two may have been transporting a home-made bomb. Dagestan is one of several republics in Russia's North Caucasus area.

Officials in Russia say they are questioning suspects in the attacks and searching for Mister Umarov.

Russia has fought two wars against Chechen separatism since the nineteen nineties. As many as one hundred thousand people were killed in the violence. This has caused a reaction among so-called Black Widows. These are women who lost husbands, fathers, sons or brothers to violence and who have become suicide bombers.

The Moscow Times newspaper reports that women were involved in about sixty percent of the nearly forty rebel attacks since two thousand one.

Many experts question whether the Russian government can carry out its threat to destroy the terrorists. Independent Russian military expert Alexander Golts says the situation suggests that security in the North Caucasus cannot be tightened further. He says the only solution is the establishment of real institutions of government throughout Russia. He says this means establishing the rule of law, rejecting the idea of a police state and supporting the separation of power.

Following the Moscow bombings, some international security experts say this kind of violence cannot be permanently stopped. But they say governments can do more to prevent mass killings. Cities in the United States and Europe have increased security in and around their mass transportation systems.

And that's IN THE NEWS in VOA Special English, written by Brianna Blake with reporting by Peter Fedynsky. I'm Steve Ember.