Update Required To play the media you will need to either update your browser to a recent version or update your Flash plugin.
By VOA
2011-7-28 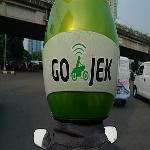 Indonesia has one of the world's fastest growing economies, expanding at a rate of six percent this year. Technology is helping fuel that growth, and producing a new generation of young entrepreneurs.

One of these "technopreneurs" is Nadiem Makarim. He graduated from the Harvard Business School in Boston, Massachusetts. He returned home and launched Go-Jek. This service connects motorcycle taxis, called ojeks, with people who need a ride or a delivery.

NADIEM MAKARIM: "If you want to do good, there needs to be a business model behind it. If you want sustainable impact, then you need a market incentive to do that. I firmly believe that business and just straight up rational business growth, profitable business growth and social impact are not mutually exclusive."

Go-Jek recently won ten thousand dollars in a competition through the American State Department's Global Entrepreneurship Program. Indonesia is one of five countries in this program which links startup businesses with investors.

Many startups are Internet-based services. Indonesia already has more than seven hundred startups online, and new ones are launched every week. Half of Indonesians still live on less than two dollars a day. But Indonesia has a young population interested in trying new technology.

Right now, about forty-five million Indonesians, or only about one in five, use the Internet. But about half of those people use mobile devices to go online, and those numbers are only growing.

Some experts say the conditions for local entrepreneurs are the best in the world. Still, the World Bank currently ranks Indonesia one hundred twenty-first out of one hundred eighty-three economies in ease of doing business.

The biggest barrier to entrepreneurs is a lack of financing. Also, economists say Indonesia needs more entrepreneurs. They now make up less than one percent of the workforce. The rate is over seven percent in nearby Singapore, and almost twelve percent in the United States.

Indonesia's biggest bank, Bank Mandiri, expects to increase loans by as much as twenty-five percent this year. Demand is growing for credit for small businesses and for consumers.

Leonard Theosabrata helped start Whiteboard Journal. This online publication offers a place for young designers to show their products. He says Indonesia has a lot of opportunity for entrepreneurs who take a risk.