Update Required To play the media you will need to either update your browser to a recent version or update your Flash plugin.
By Peter Fedynsky, David Gollust and Carolyn Presutti
2010-8-20 American officials are preparing for Israel and the Palestinians to restart direct peace talks. Secretary of State Hillary Clinton announced the plans on Friday in Washington.

HILLARY CLINTON: "I've invited Israeli Prime Minister Netayahu and Palestinian Authority President Abbas to meet on September second in Washington, D.C., to relaunch direction negotiations to resolve all final status issues, which we believe can be completed within one year."

Egyptian President Hosni Mubarak and Jordan's King Abdullah are also invited. The plan is for President Obama to meet with the four leaders on September first.

Secretary Clinton warned that more difficulties can be expected.

HILLARY CLINTON: "Without a doubt we will hit more obstacles. The enemies of peace will keep trying to defeat us and to derail these talks."

Hamas, the militant Palestinian group that rules Gaza, has already denounced the talks.

Direct talks ended almost two years ago. But George Mitchell, the American special envoy for Middle East peace, has traveled between the two sides for months of indirect, or proximity, talks. He says the United States is ready to suggest compromises, or "bridging proposals," as needed during the talks.

Secretary Clinton said the talks should take place without preconditions. The secretary said she and President Obama were "encouraged" by the leadership of Prime Minister Benjamin Netanhayu and President Mahmoud Abbas.

She said they all share the goal of two states, Israel and Palestine, living peacefully side by side. The "final status" issues also include issues like refugees and the future of Jerusalem.

On a separate issue, President Obama this week faced strong criticism in the debate over a proposed Islamic center in New York. The property is two blocks from Ground Zero, what people call the site where the twin towers were destroyed. 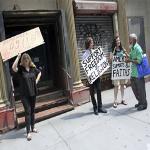 Al-Qaida attacked the World Trade Center on September eleventh, two thousand one. Opponents say it is offensive to build a Muslim site that includes a mosque less than a kilometer away.

Republicans and other criticized the president over comments he made last Friday. He was speaking to guests at an iftar dinner at the White House celebrating the holy month of Ramadan.

BARACK OBAMA: "Ground Zero is indeed hallowed ground. But let me be clear, as a citizen, and as president, I believe that Muslims have the same right to practice their religion as everyone else in this country. And that includes the right to build a place of worship and a community center on private property in lower Manhattan."

Later he said that he was not commenting on "the wisdom" of the decision.

But the top Democrat in the Senate, Harry Reid, did comment. Senator Reid is fighting for re-election this November in Nevada.

HARRY REID: "It's very obvious that the mosque should be built someplace else."

New York City officials have approved the project. Supporters say it will help bridge divisions between the West and the Muslim world.

By many estimates, the United States has about two thousand mosques. But surveys show American public opinion is mostly against what some critics call the "Ground Zero Mosque." And some construction workers say they would refuse to build it.

The prayer room would be part of a one-hundred-million-dollar Muslim cultural center. A group of American Sufi Muslims has purchased the property to build it.