Update Required To play the media you will need to either update your browser to a recent version or update your Flash plugin.
By Herbert Sutcliffe
2010-7-31 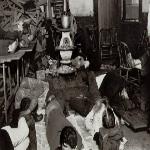 Every week at this time, the Voice of America tells about someone important in the history of the United States. This week we tell about Jacob Riis. He was a writer who used all his energy to make the world a better place for poor people.

SHIRLEY GRIFFITH: In the spring of eighteen seventy, a young man traveled across the Atlantic Ocean to New York City. The young man came from Denmark. His name was Jacob Riis. He was just twenty-one years old.

His first years in the United States were difficult, like those of most immigrants at that time. It was difficult to get a job. Jacob Riis went from place to place seeking work. He did any kind of work he could find: Farming, coal mining, brick-making. He even tried to earn money as a peddler. He went from house to house selling things. Many times he slept wherever he could.

Soon he was beginning to lose hope. He decided to leave New York. He started to walk north. After a time, he arrived in the Bronx, the northern part of New York City. His feet burned with pain. And he was hungry.

RAY FREEMAN: "I had not eaten a thing since the day before. I had no breakfast, and decided to have a swim in the Bronx River, instead. But that did not help. I was just as hungry when I came out of the water.

"Fordham is a Catholic college. And an old monk came to me and asked in a kind voice if I was hungry. I still remember in my dreams at night the beautiful face of that old monk. I was terribly hungry, and said I was, although I did not mean to do so. I had never seen a real live monk before. My own religious education as a Lutheran did not teach me to like Catholic monks.

"I ate the food that was brought to me. But I was troubled. I was afraid that after giving me food, the churchman would ask me to change my religious beliefs. I said to myself: 'I am not going to do it.' But when I had eaten, I was not asked to do anything. I was given more food when I left, and continued on my way. I was angry with myself for having such bad thoughts about the Catholic churchmen at Fordham College. For the first time, I learned something about how to live with people of different religious beliefs." 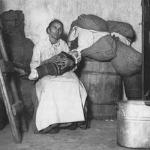 SHIRLEY GRIFFITH: Later, Jacob Riis learned more about liking people, even if they are different. This time, it happened while he was working on a railroad with men who did rough work and looked rough.

RAY FREEMAN: "I had never done that sort of work, and it was not the right job for me. I did my best to work like the other men. But my chest felt heavy, and my heart pounded in my body as if it were going to explode. There were nineteen Irishmen in the group. They were big, rough fellows. They had chosen me as the only 'Dutchman' -- as they called me -- to make them laugh. They were going to use me as part of their jokes.

"But then they saw that the job was just too hard for me. This made them feel different about me. It showed another side to these fun-loving, big-hearted people. They thought of many ways to get me away from the very rough work. One was to get me to bring water for them. They liked stronger things to drink than water. But now they suddenly wanted water all the time. I had to walk a long way for the water. But it stopped me from doing the work that was too hard for me. These people were very rough in their ways. But behind the roughness they were good men."

SHIRLEY GRIFFITH: At last, Jacob Riis got a job writing for a newspaper in New York City. This was his chance. He finally had found a profession that would lead to his life work -- making the world a better place for poor people.
The newspaper sent him to police headquarters for stories. There he saw life at its worst, especially in a very poor part of New York which was known as Mulberry Bend. 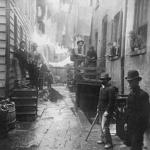 RAY FREEMAN: "It was no place for men and women. And surely no place for little children. It was a terrible slum -- as such places are called -- where too many are crowded together, where the houses and streets are dirty and full of rats. The place began to trouble me as the truth about it became clear. Others were not troubled. They had no way of finding out how terrible the lives of people were in Mulberry Bend. But as a newspaper reporter, I could find the truth. So I went through the dark dirty streets and houses, and saw how the people suffered in this area. And I wrote many stories about the life there.

"I did good work as a police reporter, but wanted a change. My editor said, 'no'. He asked me to go back to Mulberry Bend and stay there. He said I was finding something there that needed me."

SHIRLEY GRIFFITH: The words of Jacob Riis' editor proved to be very true. Riis started a personal war against slum houses, the sort he saw in Mulberry Bend. He learned to use a camera to show the public clearly what the Mulberry Bend slum was like. The camera in the eighteen eighties was nothing like it is today. But Riis got his pictures.

RAY FREEMAN: "I made good use of them quickly. Words could get no action to change things. But the pictures did. What the camera showed was so powerful that the city's health officials started to do something. At last I had a strong partner in the fight against Mulberry Bend -- my camera."

SHIRLEY GRIFFITH: Jacob Riis continued the fight to clean up the slums for many years. There were not many people to help him. It was a lonely fight. But his camera and fighting words helped to get a law passed which would destroy the Mulberry Bend slum. Finally, the great day came. The slum housing was gone. The area had become a park.

RAY FREEMAN: "When they had fixed the ground so the grass could grow, I saw children dancing there in the sunlight. They were going to have a better life, thank God. We had given them their lost chance. I looked at these dancing children and saw how happy they were. This place that had been full of crime and murder became the most orderly in the city.

"The murders and crimes disappeared when they let sunlight come into the Bend. The sunlight that shone upon children who had, at last, the right to play. That was what the Mulberry Bend Park meant. So the Bend went. And I was very happy that I had helped to make it go." 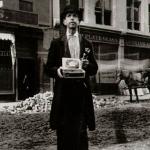 SHIRLEY GRIFFITH: That was not Riis' last battle to make life cleaner and better for many people. He had great energy. And his love for people was as great as his energy.

He also worked to get laws against child labor, and made sure that these laws were obeyed. In those days, when Riis was a fighting newspaper reporter, laws against child labor were something new. People did not object to making young children work long hours, in places that had bad air and bad light. But in the United States today, child labor is not legal. It was because of men like Jacob Riis that this is so.

He was also successful in getting playgrounds for children. And he helped establish centers for education and fun for older people.

His book, "How the Other Half Lives," was published in eighteen ninety. He became famous. That book and his newspaper reports influenced many people. Theodore Roosevelt, who later became president of the United States, called Riis the most useful citizen in New York City.

Riis continued to write about conditions that were in need of major reform. His twelve books, including "Children of the Poor," helped improve conditions in the city. The books also made him popular as a speaker in other cities. Jacob Riis's concern for the poor kept him so busy writing and speaking around the country that he ruined his health. He died in nineteen fourteen.

SHIRLEY GRIFFITH: And I'm Shirley Griffith. Listen again next week for another PEOPLE IN AMERICA program on the Voice of America.