Update Required To play the media you will need to either update your browser to a recent version or update your Flash plugin.
By Mario Ritter
2011-3-17 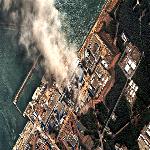 The crisis at Japan's Fukushima Dai-Ichi nuclear energy center has raised questions about the future of the nuclear energy industry. Arjun Makhijani is president of the Institute for Energy and Environmental Research in the United States. He says the disaster in Japan is historic.

ARJUN MAKHIJANI: "We are witnessing a completely unprecedented nuclear accident in that there have never been three reactors in the same place at the same time that have had a severe accident."

This week, the chairman of America's nuclear agency said there is little chance that harmful radiation from Japan could reach the United States. Nuclear Regulatory Commission Chairman Gregory Jaczko also said America has a strong program in place to deal with earthquake threats.

No new nuclear power centers have been built in the United States since nineteen seventy-nine. That was when America's worst nuclear accident happened at the Three Mile Island center in Pennsylvania. The accident began to turn public opinion against nuclear energy.

To support more clean energy production, the Obama administration has been seeking billions of dollars in government loan guarantees to build new centers. Currently, about twenty percent of electricity in the United States comes from nuclear energy. But critics say nuclear power is too costly and dangerous to be worth further expansion.

Developing nations are less willing to slow nuclear expansion. China said it will continue with plans to build about twenty-five new nuclear reactors. And India, under a cooperation agreement with the United States, plans to spend billions on new centers in the coming years.

Japan has made nuclear energy a national priority since the nineteen seventies. Unlike many major economies, Japan imports eighty percent of its energy. The Nuclear Energy Institute says twenty-nine percent of Japan's electricity came from nuclear sources in two thousand nine.The government planned to increase that to forty percent by twenty seventeen.

Nuclear reactors supply fourteen percent of global electricity. Nuclear energy is a clean resource, producing no carbon gases. But radioactive waste is a serious unresolved issue. So is the presence of nuclear power centers in earthquake areas like the one near Bushehr, Iran.