Update Required To play the media you will need to either update your browser to a recent version or update your Flash plugin.
By Mike DeFabo
2010-6-10


This is the VOA Special English Economics Report.

June means one more big test for many students finishing college -- a test of the job market. Wish them luck. Americans age twenty to twenty-four faced an unemployment rate in May of fourteen and seven-tenths percent. That was five percentage points higher than the national rate.

This week, Federal Reserve Chairman Ben Bernanke said his "best guess" is for a continued economic recovery. But the central bank chief expects unemployment to remain high for some time because of slow job creation. So where does that leave this year's graduates? 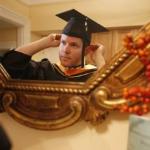 Corey Fry. a graduate of the University of California, San Francisco, nursing school, tries on his cap and gown at his apartment Tuesday. He says he will have to move to another part of the country to find a job.

The National Association of Colleges and Employers says about one-fourth of those who applied for a job have found one. NACE says that is up a little from last year. But the number is down sharply from two thousand seven, the year before the financial crash. Starting pay is also down.

Josh Safran graduated from American University in Washington with a business degree. He is still looking for a job.

JOSH SAFRAN: "Once you get noticed by a company, it gets a lot easier, but it's so hard to get noticed because there's so many people looking for so few jobs."

One way to get noticed is through an internship program, says Reuben Smith-Vaughn, another graduate of American University.

REUBEN SMITH-VAUGHN: "I know I personally got my job that way. And the people that worked there before me got their jobs that way. So I think it's a key when getting a job."

Internships may offer little or no money. Some students even pay for them. But NACE says ninety-two percent of the employers it asked had plans to hire interns this year.

Twenty-two year old Sarah Kramer just got her degree in biomedical engineering from Columbia University in New York. She found a job with a major consulting company in Washington. But her search was not easy.

SARAH KRAMER: "I started in August before my senior year. And I set up appointments with career services. I applied to about a hundred and fifty jobs. I went on maybe fifteen interviews."

Ms. Kramer says many of her friends have not found jobs. Many have chosen to go to graduate school instead. But she has suggestions for students entering their final year of college who want a job when they graduate.

SARAH KRAMER: "Well, advice for a rising senior is to start early. Take advantage of your career services at your school as much as you can. And don't give up, and just keep applying to as many jobs as you can."

Josh Safran says he may have to do what a growing number of recent college graduates are doing.

JOSH SAFRAN: "Worst-case scenario, if I don't find a job by the end of August, I move back with my parents."