Update Required To play the media you will need to either update your browser to a recent version or update your Flash plugin.
By Shelley Gollust
2010-11-6 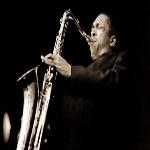 Coltrane discovered jazz by listening to the recordings of such jazz greats as Count Basie and Lester Young.

SHIRLEY GRIFFITH: PEOPLE IN AMERICA, a program in Special English by the Voice of America.

He was one of the greatest saxophone players of all time. He wrote jazz music. He recorded new versions of popular songs. And, he helped make modern jazz popular. I'm Shirley Griffith.

SHIRLEY GRIFFITH: John Coltrane was born in the state of North Carolina in nineteen twenty-six. He was raised in the small farm town of High Point. Both of his grandfathers were clergymen. As a young boy, he spent a great deal of time listening to the music of the black Southern church. 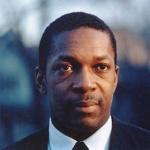 Coltrane began playing saxophone when he was thirteen years old.

Coltrane's father sewed clothes. He played several musical instruments for his own enjoyment. The young Coltrane grew up in a musical environment. He discovered jazz by listening to the recordings of such jazz greats as Count Basie and Lester Young.

STEVE EMBER: When John was thirteen, he asked his mother to buy him a saxophone. People realized almost immediately that the young man could play the instrument very well. John learned by listening to recordings of the great jazz saxophone players, Johnny Hodges and Charlie Parker.

John and his family moved to Philadelphia, Pennsylvania in nineteen forty-three. He studied music for a short time at the Granoff Studios and at the Ornstein School of Music.

SHIRLEY GRIFFITH: John Coltrane served for a year in a Navy band in Hawaii. When he returned, he began playing saxophone in several small bands.

STEVE EMBER: Coltrane began experimenting with new ways to write and perform jazz music. He explored many new ways of playing the saxophone.

Some people did not like this new sound. They did not understand it. Others said it was an expression of modern soul. They said it represented an important change. Jazz performers, composers and other musicians welcomed this change. 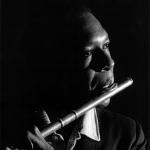 The talented musician experimented with new ways to write and perform jazz music.

During the nineteen fifties, Coltrane used drugs and alcohol. He became dependent on drugs. Band leaders dismissed him because of his drug use. In nineteen fifty-seven, Coltrane stopped using drugs.

SHIRLEY GRIFFITH: In nineteen fifty-nine, John Coltrane recorded the first album of his own music. The album is called "Giant Steps." Here is the title song from that album.

STEVE EMBER: Coltrane also recorded another famous song with a larger jazz band. The band included Milt Jackson on vibes, Hank Jones on piano, Paul Chambers on bass and Connie Kay on drums. Here is their recording of "Stairway to the Stars."

SHIRLEY GRIFFITH: In nineteen sixty, Coltrane left Miles Davis and organized his own jazz group. He was joined by McCoy Tyner on piano, Jimmy Garrison on bass and Elvin Jones on drums. This group became famous around the world.

John Coltrane's most famous music was recorded during this period. One song is called "My Favorite Things." Richard Rogers and Oscar Hammerstein had written the song for the Broadway musical "The Sound of Music." Jazz critics say Coltrane's version is one of the best jazz recordings ever made. The record became very popular. It led many more people to become interested in jazz.

STEVE EMBER: Critics say Coltrane's versions of other popular songs influenced all jazz music writing. One of these was a song called "Summertime." It was written by Du Bose Heyward and George Gershwin for the opera "Porgy and Bess."

SHIRLEY GRIFFITH: In nineteen sixty-four, Coltrane married pianist Alice McCloud who later became a member of his band. He stopped using alcohol, and became religious. He wrote a song to celebrate his religious experience. The song is more than thirty minutes long. It is called "A Love Supreme." Here is part of the song.

One of his most famous song is called "My Favorite Things."

STEVE EMBER: By nineteen sixty-five, Coltrane was one of the most famous jazz musicians in the world. He was famous in Europe and Japan, as well as in the United States. He was always trying to produce a sound that no one had produced before. Some of the sounds he made were beautiful. Others were like loud screams. Miles Davis said that Coltrane was the loudest, fastest saxophone player that ever lived.

Many people could not understand his music. But they listened anyway. Coltrane never made his music simpler to become more popular.

Coltrane continued to perform and record even as he suffered from liver cancer. He died in nineteen sixty-seven at the age of forty in Long Island, New York.

SHIRLEY GRIFFITH: Experts say John Coltrane continues to influence modern jazz. Some critics say one of Coltrane's most important influences on jazz was his use of musical ideas from other cultures, including India, Africa and Latin America.

Whitney Balliett of The New Yorker Magazine wrote about Coltrane the year after his death: "People said they heard the dark night ... in Coltrane's wildest music. But what they really heard was a heroic ... voice at the mercy of its own power."

STEVE EMBER: This Special English program was written by Shelley Gollust. It was produced by Lawan Davis.? I'm Steve Ember.

SHIRLEY GRIFFITH: And I'm Shirley Griffith. Join us again next week at this time for another PEOPLE IN AMERICA program on the Voice of America.