Update Required To play the media you will need to either update your browser to a recent version or update your Flash plugin.
By VOA
2011-12-23

Mr. Kim was the second-generation communist ruler of North Korea. Mr. Havel was a writer and dissident who led the anti-communist revolution in Czechoslovakia in nineteen eighty-nine.

He was born in Prague three years before World War Two started. Communists seized power in nineteen forty-eight. They denied him a university education because his parents were wealthy.

Mr. Havel wrote plays in the early nineteen sixties that gained an international following. Then came the invasion of his homeland in nineteen sixty-eight. Troops from the Soviet-led Warsaw Pact invaded the country after an effort at political reforms known as the Prague Spring. Officials seized Mr. Havel's passport when he protested.

Later, his human rights activities led to years of prison and house arrest. But, in the end, he led his country's "Velvet Revolution" as the communist governments of Eastern Europe collapsed.

A few years later, as a visiting scholar at New York's Columbia University, he told students that it was important to challenge oppression with the truth.

VACLAV HAVEL: "Truth and morality could have stronger power than weapons."

Vaclav Havel died last Sunday of respiratory problems at the age of seventy-five. On Friday, world leaders attended his funeral at the end of a week of honors. The American delegation included Secretary of State Hillary Clinton and her husband, former President Bill Clinton.

Kim Jong Il's funeral is set for Wednesday in Pyongyang. North Korea waited two days to announce his death. It said he died Saturday of a heart attack during a "field guidance tour" on his train. He was sixty-nine years old. 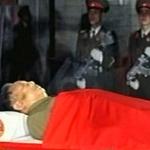 The body of North Korean leader Kim Jong Il is laid in a memorial palace in Pyongyang, North Korea

Kim Jong Il expanded North Korea's nuclear program while millions of his people were starving. His forces tested nuclear weapons and launched missiles. His actions deeply worried his neighbors and the United States.

Kim Jong Il rarely appeared in public. He had led North Korea since his father died seventeen years ago. North Korea has the world's fifth largest army. But the economy suffered as the North faced natural disasters. It also faced the loss of aid after the official end of the Soviet Union twenty years ago this Sunday.

Bruce Klingner is senior research fellow for northeast Asia at the Heritage Foundation in Washington.

BRUCE KLINGNER: "His legacy will be of an impoverished nation where a million or more of his citizens died of starvation and starvation-related diseases in the mid-nineties, because North Korea was reluctant to allow aid to come into his country. His legacy will be of a brutal regime that used gulags, hundreds of thousands of people languished in concentration camps in his country."

And that's IN THE NEWS in VOA Special English. I'm Christopher Cruise.