Laying the Roots for Healthy Teeth in Young Children

Update Required To play the media you will need to either update your browser to a recent version or update your Flash plugin.
By VOA
2011-12-27

Bad teeth can be painful -- and worse. They can even be deadly. Infections of the gums and teeth can release bacteria into the blood system. Those bacteria can increase the chances of a heart attack or stroke and worsen the effects of other diseases. And adults are not the only ones at risk.

For example, in two thousand seven, doctors in the Washington area said a boy died when a tooth infection spread to his brain. They said it might have been prevented had he received the dental care he needed. He was twelve years old.

Experts at the National Institutes of Health say good dental care starts at birth. Breast milk, they say, is the best food for the healthy development of teeth. Breast milk can help slow bacterial growth and acid production in the mouth.

But dentists say a baby's gums and early teeth should be cleaned after each feeding. Use a cloth with a little warm water. Do the same if a baby is fed with a bottle. Experts say if you decide to put your baby to sleep with a bottle, only give the child water.

When baby teeth begin to appear, you can clean them with a wet toothbrush. Dentists say it is important to find soft toothbrushes made especially for babies and to use them very gently.

The use of fluoride to protect teeth is common in many parts of the world. For example, it is often added to drinking water supplies. The fluoride mixes with enamel, the hard surface on teeth, to help prevent holes, or cavities, from forming. 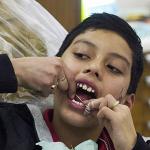 A young man in Nebraska tries his hand at flossing in this file photo.

Parents often wonder what effect thumb sucking or sucking on a pacifier might have on their baby's teeth. Dental experts generally agree that this is fine early in life.

The American Academy of Family Physicians says most children stop sucking their thumb by the age of four. If it continues, the group advises parents to talk to their child's dentist or doctor. It could interfere with the correct development of permanent teeth.

Dentists say children should have their first dental visit at least by the time they are one year old. They say babies should be examined when their first teeth appear -- usually at around six months.

And that's the VOA Special English Health Report. You can read, listen and learn English with our programs at 51voa.com. I'm Karen Leggett.