Update Required To play the media you will need to either update your browser to a recent version or update your Flash plugin.
By Mario Ritter
2011-2-10 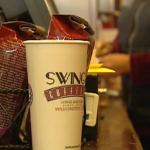 Photo: VOA
A cup of coffee at the M.E. Swing Coffee Company shop in Washington DC

Food prices are at their highest level since the United Nations Food and Agriculture Organization began keeping records in nineteen ninety. The causes include bad weather and growing demand. Some experts also blame the use of food crops to make fuel.

But higher food prices are not always the result of limited supplies.

Coffee prices have jumped almost fifty percent in six months. Prices have reached a thirteen-year high. Yet growers expect their current crop to be almost ten percent bigger than the last one.

JM Smucker is an American company known for its jellies and fruit spreads. But Smucker also owns Folgers, America's top-selling packaged coffee. And it owns Dunkin' Donuts, which sells coffee to wash down the doughnuts at its stores.

On Tuesday, Smucker said it would raise the prices of its coffee products by an average of ten percent. It said the increase is driven by the higher prices for coffee beans.

MARK WARMUTH: "There's no right or wrong answer with regard to ‘What's a good cup of coffee?' A lot of it has to do with personal preference or taste."

Mark Warmuth owns the M.E. Swing Coffee Company in Alexandria, Virginia, near Washington. He says big coffee sellers like Starbucks help his business by building a base of customers who want something better.

MARK WARMUTH: "They're seeking something that would be better than what they can buy at Starbucks. They're seeking out smaller, boutique, artisan, craft coffee roasters, which I consider us to be, a boutique coffee roasting company. What we can do is source better quality beans and supply them at a fresher level because we're smaller and we can cater to the smaller metro area. That helps us compete with bigger companies."

Yet Mr. Warmuth can thank those bigger companies like Starbucks for spreading the idea of coffee as an affordable luxury. The thinking goes that during hard times, people might not go on a trip but they might be willing to pay extra for good coffee.

The company supplies restaurants and other businesses, but also has a store in Washington near the White House. Customers pay thirteen dollars for less than half a kilogram of beans -- about double the price of other brands.