Update Required To play the media you will need to either update your browser to a recent version or update your Flash plugin.
By Shelley Gollust
2011-9-17 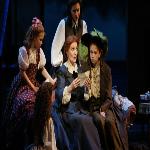 Photo: AP
"Little Women" is still popular today. The book has been made into several plays and movies

SHIRLEY GRIFFITH: And I'm Shirley Griffith with the VOA Special English program People in America. Every week we tell about a person important in the history of the United States. Today we tell about Louisa May Alcott. She wrote one of America's best known children's books.

BOB DOUGHTY: In eighteen sixty-eight, an American publisher asked a struggling young writer to write a book for girls. At first, the writer, Louisa May Alcott, was not sure she wanted to do it. She said she never liked girls. And she never knew many, except her sisters. She thought her family's activities and experiences might be interesting to others. But, she said, probably not.

SHIRLEY GRIFFITH: Alcott decided to write the book anyway. She told about her experiences growing up in the northeastern United States during the middle of the nineteenth century. Her book proved to be more than interesting. "Little Women" became one of the most popular children's books in American literature. It has been published in more than fifty languages.

BOB DOUGHTY: Louisa May Alcott was born in Pennsylvania in eighteen thirty-two. She was the second of four daughters. She had one older sister, Anna. And two younger sisters, Elizabeth, called Beth, and May. Her parents were Bronson and Abigail Alcott. Her father was an educator and social reformer. 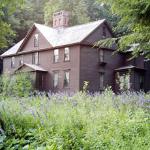 The home where Louisa May Alcott grew up in Concord, Massachusetts

The Alcotts later settled in Concord, Massachusetts. Several great American writers were friends of the family. They included Ralph Waldo Emerson, Nathaniel Hawthorne, and Henry David Thoreau. Mister Alcott provided the girls' education. He taught them many subjects. He also made them write about their personal thoughts and experiences.

SHIRLEY GRIFFITH: The Alcotts did not have much money. Louisa worked to help support her family. She tried teaching, sewing, and taking care of children. She did not like any of these jobs.

Louisa thought of herself as a writer. At the age of sixteen, she wrote her first book. It was called "Flower Fables." She decided to sell what she wrote. She wrote many kinds of poems, stories, and plays. Her stories were exciting, but unrealistic. She sold them to newspapers and magazines for small amounts of money.

BOB DOUGHTY: In eighteen sixty-two, during the American Civil War, Louisa May Alcott went to Washington, D.C. She served as a nurse in a military hospital. She cared for sick and wounded soldiers. She wrote letters to her family about her experiences. She included these letters in a book that was published the next year. Critics praised it but it did not bring her much money. And, working in the hospital damaged her health.

SHIRLEY GRIFFITH: In eighteen sixty-five she visited Europe as a helper to an older woman. Alcott hoped to re-gain her health. She spent a long time away from her family. Her health did not improve. But she thought about her writing. When she returned, she agreed to her publisher's request that she write a book for girls based on the life she knew.

"Little Women" was published in eighteen sixty-eight. The book was immediately popular with people of all ages. It brought Alcott fame and a lot of money. She continued writing other popular books for young people. These included "An Old-Fashioned Girl," "Little Men, and "Eight Cousins."

BOB DOUGHTY: Louisa May Alcott wrote books for adults, as well as children. She published these under another name -- A. M. Barnard. These books were published before "Little Women" made her famous. They were very different from her children's stories. They were about love, power, and unhappiness. 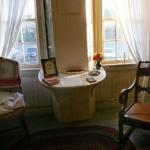 SHIRLEY GRIFFITH: Alcott wrote a story called "A Long Fatal Love Chase." It is about an independent young woman. She marries an older man who already has a wife. She flees from him. He follows her throughout Europe. The book tells of insanity, violence, and death. Louisa May Alcott tried to get the book published in eighteen sixty-six. The publisher rejected it. He said it was too shocking.

In the early nineteen nineties, a man who collected Alcott materials found the unpublished story in a bookstore in New York City. He bought it for about fifty thousand dollars. Reports said he sold it to a major American publisher for about one million dollars. The story was published in nineteen ninety-five.

BOB DOUGHTY: Louisa May Alcott wrote many exciting stories about love. Yet she never married. She continued to support her family during the last years of her life. In fact, she cared for the young daughter of her sister, May, who died in eighteen seventy-nine.

Alcott was involved in the movements to end slavery and to gain voting rights for women. She wrote that "I . . . take more pride in the very small help we Alcotts could give than in all the books I ever wrote." Louisa May Alcott died in eighteen eighty-eight.

SHIRLEY GRIFFITH: Louisa May Alcott's most famous book, "Little Women", tells the story of the March family of Concord, Massachusetts. The story begins during the American Civil War in the eighteen sixties. Mister March is away from home. He is with the troops of the Union Army. He is a religious worker. Missus March is raising her four daughters by herself.
The March family is very close. They do many things together. They do not have much money. They suffer shortages caused by the war. Yet they share what they have with people who are in need.

BOB DOUGHTY: The four daughters are Meg, Jo, Beth, and Amy. They are strong, brave, and loving. Jo is the most important person in the book. She is smart. She has a good imagination. She writes stories. And she creates plays that the sisters perform together.
Jo also is independent. She chooses a non-traditional life. She goes to New York to become a writer. There she meets an older man, a professor. She returns home to care for her parents. She writes stories that become very popular. Later, Jo marries the professor. Together, they establish a school.

SHIRLEY GRIFFITH: The March family in "Little Women" is very much like Louisa May Alcott's family. Her sisters are like the sisters in the book. And the leading person, Jo, is like Louisa. Jo must work to support her family, just as Louisa had to do. One of Jo's jobs is to help a family member, an old woman called Aunt March. Jo does not really like Aunt March. But she loves the older woman's house, especially the large library with hundreds of books. This is how Alcott writes about this place:

BOB DOUGHTY: "The dim, dusty room. . . the cozy chairs, the globes, and, best of all, the wilderness of books in which she could wander where she liked, made the library a region of bliss to her. The moment Aunt March took her nap, or was busy with company, Jo hurried to this quiet space, and, curling herself up in the easy chair, devoured poetry, romance, history, travels, and pictures, like a regular bookworm. "

All of these wonderful books put great ideas into Jo's head. Jo wanted to do something very wonderful, Alcott writes: "What it was she had no idea as yet, but left it for time to tell her."

SHIRLEY GRIFFITH: Jo's beloved sister Beth dies young, as Alcott's own sister Beth did. Jo is very unhappy. Her mother tells her to write because that always made her happy. Jo writes a story "that went straight to the hearts of those who read it." Jo cannot understand how her simple little story became so popular.

Her father explains, "There is truth in it, Jo, that's the secret; . . . You have found your style at last. You wrote with no thought of fame or money, and put your heart into it. . . ; You have had the bitter, now comes the sweet. "

BOB DOUGHTY: Louisa May Alcott's book, "Little Women", is still popular today. The book has been made into several movie versions. And, some American women say they decided to become writers after reading how Jo March became a writer in "Little Women".

SHIRLEY GRIFFITH: This Special English program was written by Shelley Gollust. It was produced by Dana Demange. I'm Shirley Griffith.

BOB DOUGHTY: And I'm Bob Doughty. For transcripts, mp3s and podcasts of our programs, go to 51voa.com. Join us again next week for another People in America program on the Voice of America.