Mavericks, Bruins Are Champs in a Busy Sports Week

Update Required To play the media you will need to either update your browser to a recent version or update your Flash plugin.
By VOA
2011-6-17 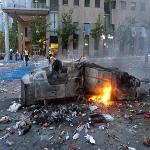 Photo: dapd
The wreckage of a car in Vancouver the day after fans rioted in reaction to the Vancouver Canucks' defeat by the Boston Bruins in the NHL Stanley Cup Final.

Hockey, basketball and golf were all in the news this week.

In the National Hockey League, the Boston Bruins won the Stanley Cup. The Bruins defeated the Vancouver Canucks four to nothing in the seventh and final game of their championship series.

Some Vancouver fans rioted after the Canucks lost the game in their home city.

Others condemned the violence:

The Canadian city hosted the Winter Olympics last year. The Canucks had the best team record during the regular season. But Vancouver has never won the Stanley Cup.

This is the first championship since nineteen seventy-two for Boston -- one of the oldest teams in the NHL. Goalie Tim Thomas was named the most valuable player of the series.

In the National Basketball Association, the Dallas Mavericks defeated the Miami Heat for the NBA championship. Many people considered the Heat the favorites because of players like Lebron James and Chris Bosh. But Dallas won the series four games to two. Dallas' Dirk Nowitzki played although he was sick. He was chosen the most valuable player of the series.

In golf, the US Open championship is being played this week at the Congressional Country Club in Bethesda, Maryland, near Washington. The defending champion, Graeme McDowell of Northern Ireland, won the event last year at Pebble Beach, California.

Tiger Woods is missing his first US Open since nineteen ninety-five. He is out with leg injuries.

The US Open is one of the four major events in golf. And for the first time, since nineteen ninety-four, all four championships are held by golfers from outside the United States.

The last American to win a major event was Phil Mickelson -- at the Masters last year. Mickelson says he is not worried about American golfers. He says a lot of young players in the United States are improving.

PHIL MICKELSON: "We have a plethora of great players coming up, but it's obvious that world golf as a whole has become so much stronger, and that international and European golf has become world class and top notch, and some of the best players in the world are certainly on the rankings right now. So although international golf has really taken off, American golf is still in very good shape."

President Obama has invited the speaker of the House of Representatives, John Boehner, to play golf on Saturday. No one expects them to settle their disagreements on issues like the economy, health care or the military action in Libya. But White House Press Secretary Jay Carney says they may be able to work together better in the future.

JAY CARNEY: "Spending a number of hours together in that kind of environment, I think, can only help improve the chances of bipartisan cooperation. It certainly cannot hurt it. Unless someone wins really big, and then ... [Laughter]"

Don Van Natta wrote a book about American presidents and their golf games. He says it is highly unusual for a president to invite a political opponent to join him on the golf links.

DON VAN NATTA: "The closest example in history is Lyndon Baines Johnson, who played with senators from the opposing party who he wanted to lobby to vote for the civil rights legislation in the mid-sixties."