Update Required To play the media you will need to either update your browser to a recent version or update your Flash plugin.
By Marilyn Christiano and Shelley Gollust
2012-4-10 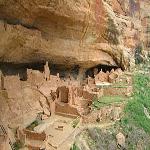 Photo: nps.gov
A view of cliff dwellings at Mesa Verde

BARBARA KLEIN: And I'm Barbara Klein with EXPLORATIONS in VOA Special English. Today we tell about a large National Park established to protect the culture of ancient Native Americans. It is called Mesa Verde.

STEVE EMBER: It was cold that day in eighteen eighty-eight in southwestern Colorado. Richard Wetherill and his brother-in-law were trying to find some missing cattle. They were up on Mesa Verde. Spanish explorers had named the area. The high, flat mountaintop is covered with many green juniper and pinon pine trees. It looks like a huge green table, which is "mesa verde" in Spanish.

The two men came to the edge of a deep canyon. Through the falling snow, they saw what looked like a small city across the canyon. It was suspended in the middle of the rock wall. There were many connected rooms built into a natural opening in the rock.

BARBARA KLEIN: A number of other people had seen and taken pictures of some of the cliff dwellings earlier. But the Wetherill family was the first group to study them. Soon after his discovery, Richard Wetherill returned to Mesa Verde, to the ruins that had remained silent and untouched for centuries.

Richard Wetherill collected many objects. It was an easy task. It looked as if the people who had lived there had just walked away, leaving everything they owned. Cooking pots by the fireplaces. Food bowls on the floors. Shoes in the corners. Sticks for digging by the doors.

The ruins in Colorado had been home to the ancestors of the present day members of the Pueblo tribes. They were named Anasazi, or ancient ones, by the Navajo Indians. They moved to Mesa Verde about one thousand five hundred years ago and left seven hundred years ago. They built the cliff dwellings in Mesa Verde toward the end of the eight hundred years they lived there.

STEVE EMBER: Richard Wetherill showed his collection of objects in nearby towns. People were not interested. Just some more old Indian things, they said. Finally, he sold his collection to the Colorado Historical Society. But the Wetherill family continued exploring Mesa Verde. Their finds became known in the eastern United States and in Europe. Hundreds of people went to Mesa Verde to see for themselves.

BARBARA KLEIN: One of the earliest visitors was a young man from Sweden, Gustaf Nordenskiold. Mister Nordenskiold spent months exploring the area. He traveled on foot and on horseback. He took pictures that were published in a book, "The Cliff Dwellers of the Mesa Verde."

Gustaf Nordenskiold collected hundreds of objects he found in the ruins. He loaded them on teams of mules and sent them to the nearby town of Durango, Colorado. Local officials tried to prevent him from removing so many objects. But there were no laws to stop him. Mister Nordenskiold shipped the objects to Sweden. Later, they were given to the national museum in Helsinki, Finland, where they remain today.

STEVE EMBER: Many people were shocked by the continuing removal of objects from the ruins at Mesa Verde. One was a woman named Virginia McClurg. She had visited the area and had explored a few small ruins. From eighteen eighty-seven to eighteen ninety-six, she campaigned throughout the country to get laws to save the cliff dwellings. She gave speeches describing the destruction of the dwellings by people seeking treasures. She worked for years with members of the United States Congress to get such laws passed.

BARBARA KLEIN: Today, from a distance, Mesa Verde appears as it did centuries ago. It rises more than five hundred forty meters above the floor of the valley. Visitors can drive up to the top of Mesa Verde on a winding mountain road. When you reach the top, you are two thousand four hundred meters above sea level. In the distance are the flat lands and mountains of the Four Corners area. That is where the western states of Colorado, New Mexico, Utah and Arizona meet. This area has one of the largest numbers of archeological sites in the United States.

STEVE EMBER: Within the national park are more than five thousand ruins from the time of the Ancestral Puebloan people. Six hundred are cliff dwellings. Most of the ruins remain unexplored. Some have been uncovered and supported to make them safe to visit. These ruins are open to the public during most of the year. During the winter, activities are limited. The visitors' center at the park is open during the summer. The museum is open all year.

The visitors' center and the museum provide information about the history of the culture of the ancient Pueblo people and about present-day Indians. National Park Service guides lead visitors to the ruins. They give talks about the cultural history of the area. And they talk about the geology and wildlife.

BARBARA KLEIN: Some of the ruins in the Four Corners area are from the earliest people who lived there. They were hunters and gatherers, now known as Basket Makers. The Basket Makers lived in simple caves. Their civilization existed two thousand years ago. The first evidence that ancient people had moved to Mesa Verde is from about the year five hundred. Those people lived in pit houses. Pit houses were large holes in the ground with roofs of wood and mud.

In about the year seven hundred fifty, the early Pueblo people began building square structures of large connected rooms, or pueblos, above ground. Finally, in about eleven hundred, they climbed down the canyon walls and began building cliff dwellings. Today, visitors to Mesa Verde can see some of the remains of all four kinds of settlements.

STEVE EMBER: Cliff Palace is the largest cliff dwelling in Mesa Verde and also in North America. It has one hundred fifty rooms. It is difficult to get to it. Visitors must climb down into the canyon on a narrow path with many steps. They must also climb down several ladders. But the trip is well worth the effort. Visitors can examine a huge and beautiful structure made of stone and clay.

Spruce Tree House is the third largest cliff dwelling in Mesa Verde National Park. It has one hundred fourteen rooms. It also has eight underground rooms called kivas. The Indian men gathered in the kivas for special ceremonies. About one hundred people lived in this cliff dwelling during the thirteenth century.

Spruce Tree House is the easiest cliff dwelling to visit. The path curves down into the valley and then up to the ruin. Signs along the path point to trees and plants used by the Ancestral Puebloan people. Also along the path are the juniper and pinon pine trees that make Mesa Verde green.

BARBARA KLEIN: About five hundred thousand people visit Mesa Verde National Park each year. The park's archeologists have recovered many objects that the ancient Pueblo people used, including pots, tools and jewelry. Many of the objects are shown in the visitors' center. However, human remains or any object from a grave may not be touched or shown. This is to honor the wishes of the modern Puebloan people who live in the area today.

Mesa Verde National Park occupies twenty-one thousand hectares of land. However, only about ten percent of the area has been explored.

STEVE EMBER: Mesa Verde is recognized as a special place. The United Nations named it one of the first World Heritage sites in nineteen seventy-eight. Special events were held at Mesa Verde during its one hundredth anniversary in two thousand six. They included tours of areas never before open to the public.

Today's Pueblo Indians whose ancestors lived in Mesa Verde consider it a sacred place. And for visitors from around the world, it remains a place of mystery and beauty.

BARBARA KLEIN: This program was written by Marilyn Christiano and Shelley Gollust. It was produced by Mario Ritter. I'm Barbara Klein.