What Next for Michelle Rhee and Her School Reform Campaign?

Update Required To play the media you will need to either update your browser to a recent version or update your Flash plugin.
By VOA
2010-10-20 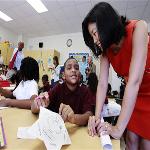 Michelle Rhee had never led a school system before she came to the public schools in Washington in two thousand seven. By the end of the following year she was on the cover of Time. The magazine recognized her as a national leader in education reform.

And now Ms. Rhee appears in the film "Waiting for 'Superman,'" a documentary about problems in the educational system.

MICHELLE RHEE: "You wake up every morning and you know that kids are getting a really crappy education right now."

DAVIS GUGGENHEIM: "So you think that most of the kids are getting a crappy education right now?"

MICHELLE RHEE: "Oh, I don't think they are. I know they are."

Ms. Rhee closed underperforming schools in America's capital. She dismissed hundreds of teachers and administrators -- including the principal at her daughters' school.

She angered the teachers union and those traditionally protected in permanent jobs, but who she said were not doing a good enough job. She negotiated a new labor contract that measures teacher success based in part on student performance.

Many of her actions were the same as those supported nationally by the Department of Education and President Obama.

But last week, Michelle Rhee announced she will leave after almost three and a half years. Her resignation takes effect at the end of October. She said Washington's next mayor should be able to start with someone of his own choice.

People can argue about why Mayor Fenty lost after one term. But for many voters, one reason was his hiring of Michelle Rhee and his support for her aggressive reforms.

Public opinion surveys showed a racial divide. A majority of whites but only a third of blacks thought the public schools have improved.

Close to seventy percent of whites told the Washington Post that Ms. Rhee was a reason to support Mayor Fenty. But more than half of blacks saw her as a reason to vote against him.

Mr. Gray and Mr. Fenty are both African-American, as are three out of four students in the District of Columbia public schools.

Mr. Gray promises to continue school reform efforts. Ms. Rhee's leadership team will remain until the end of the school year. Her deputy, Kaya Henderson, is taking her place, at least for now.

It is unclear what Michelle Rhee will do next. Shortly after her announcement, she launched michellerhee.org. She says she will continue her efforts for education reform, and she is asking people to share ideas.

She also says she wants to live closer to her future husband, Kevin Johnson, the mayor of Sacramento, California.