Update Required To play the media you will need to either update your browser to a recent version or update your Flash plugin.
By Mario Ritter
2011-3-31 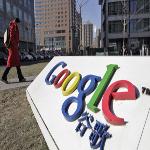 Photo: REUTERS
A woman walks past the logo of Google in front of its headquarters in Beijing January 12, 2011

Microsoft has fought legal battles with officials in Europe and the United States over competition in the personal computer market. But now Microsoft is accusing Google of being anti-competitive. A complaint to the European Commission accuses Google of unfairly controlling the Internet search market in Europe.

Google is already talking to the commission about the issue and says it is happy to explain to anyone how its business works.

Google also faces other issues. Gmail users in China began reporting problems with Google's e-mail service in late February. The problems came as news of the revolutions in the Arab world filled the Internet and there were online calls for protests in China.

Google said the government was interfering with its e-mail service.

JESSICA POWELL: "This is a government blockage, carefully designed to look like the problem is with Gmail."

Google is the world leader in Internet search. But in China, the biggest search engine is Baidu. And this week, China's largest Internet media company, Sina, dropped Google's search engine from its website. Sina says it is using its own technology.

An estimated four hundred fifty million Chinese are online -- about half of all Internet users in Asia.

Last year, Google said a cyberattack from China had attempted to get information from the Gmail accounts of human rights activists. Google also expressed concerns about censorship. So Google relocated its Chinese search engine from the mainland to Hong Kong.

The company is also facing new problems at home. A federal judge in New York has ruled against its plan to put millions of books online.

Google wants to create a digital library of all the world's books. It reached a one hundred twenty-five million dollar deal in two thousand eight with groups representing writers and publishers. Google agreed to create a system to pay copyright holders when their works are used online.

But Judge Denny Chin rejected the proposed settlement. He said it gives Google monopoly control of the book search market. But he left open the possibility for a new plan.

On a similar issue, Baidu says it has removed almost three million documents from its library. Writers have complained that Baidu did not have permission for their works to appear on its document-sharing site.