Update Required To play the media you will need to either update your browser to a recent version or update your Flash plugin.
By VOA
2010-8-13 Photo: AP
Villagers flee their homes in central Pakistan because of flooding Wednesday

Much of Pakistan faces more storms in the coming days. Heavy rains have already caused more than two weeks of record flooding. Health officials worry about disease spreading because of a lack of clean drinking water.

The United Nations wants four hundred sixty million dollars to provide immediate help to fourteen million people affected by the flooding. The appeal this week came as estimates put the number of dead at about one thousand six hundred.

The Pakistani ambassador to the U.N. says the floods could limit his country's economic growth this year. The cotton industry has been especially hard hit.

Pakistan has cancelled official Independence Day celebrations that were set for Saturday.

The United States military has been helping rescue people and transport emergency supplies by helicopter.

The chairman of the Senate Foreign Relations Committee, John Kerry, is expected to visit Pakistan next week. He helped push for a big program of civilian aid that Congress approved last year for Pakistan.

Separately, Russian officials are reporting progress against wildfires that have blackened parts of the country and polluted the air. Russia has requested technical assistance. President Obama called President Dmitri Medvedev on Thursday to tell him that American firefighting equipment is on the way. 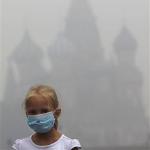 The fires are not the only problem. President Medvedev says Russia has lost about one-fourth of its grain crops this year to heat and dry weather. Prime Minister Vladimir Putin has banned grain exports until the end of the year.

Russia is a major wheat exporter. But crops have been hit hard by the record heat this summer. During the past week, bread prices in Russia have jumped by twenty percent.

But skies cleared over Moscow after days of heavy pollution, and there were cooling rains. The city set a new record for itself when temperatures reached thirty-nine degrees Celsius on July thirtieth.

American scientists reported Friday that this July was the second warmest worldwide in records dating back to eighteen eighty. The government report said the average temperature for January through July was the warmest on record.

In China, heavy rains on Friday interfered with efforts to reach people trapped by new flooding and landslides in the northwest. Weeks of flooding have killed at least two thousand people across China.

In Africa, the U.N. Refugee Agency says flooding has left thousands homeless in Chad. The heaviest rainfall in forty years comes after two years of drought. Now, some crop fields have been flooded.

And, finally, scientists say an island of ice broke off from a glacier in Greenland earlier this month. The piece is four times bigger than Manhattan Island in New York. Some people are blaming this and recent weather events around the world on climate change. Others say breaks in the Arctic ice are normal and the only thing unusual this time is the size.