Mother Bears May Be More Bark Than Bite

Update Required To play the media you will need to either update your browser to a recent version or update your Flash plugin.
By Brianna Blake and Jerilyn Watson
2011-6-21


FAITH LAPIDUS: This is SCIENCE IN THE NEWS, in VOA Special English. I'm Faith Lapidus.

BOB DOUGHTY: And I'm Bob Doughty. This week, we tell about the robot collection at the world famous Smithsonian Institution here in Washington, DC. We also tell about North American black bears and a new study of their attacks.

FAITH LAPIDUS: The Smithsonian Institution's National Museum of American History recently added several robotic technologies to its collection. The Smithsonian currently has about one hundred robotic artifacts, including some of the world's smallest robots. 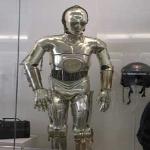 The collection also includes C-3PO and R2-D2 from the "Star Wars" movie series.

Carlene Stephens works for the museum. She says that while the "Star Wars" robots were just movie props, they represent something more.

FAITH LAPIDUS: One of Carlene Stephens' favorite artifacts is a four hundred fifty-year old carved figure from Germany. This piece of wood is less then forty centimeters tall. It is a kind of model robot from the mechanical age.

CARLENE STEPHENS: "It looks like a figure of a monk and it rolls across the floor, simulating walking. All the while, he's rolling across the floor his eyes are moving side to side."

BOB DOUGHTY: Worldwide, more than six million robots work in factories and perform military service. Among the robots in the Smithsonian's collection is PackBot. It helps the United States military find and disarm mines in Afghanistan. Packbot can also gather intelligence.

The Smithsonian also has a driverless car named Stanley. It raced more than two hundred kilometers across southern California's Mojave Desert to win the two million dollar DARPA Grand Challenge. The Department of Defense provided financial support for the competition.

CARLENE STEPHENS: "I had to take a chance that Stanley is going to represent a key moment in the history of American technology that indicates the future of driving. And already we have cars that park themselves, collision avoidance systems that the car tells you that you're about to hit something or back into something. Stanley is in this stream of inventive outpouring."

FAITH LAPIDUS: Barry Spletzer formerly worked as a top scientist at the Sandia National Laboratories Intelligent Systems and Robotics Center in New Mexico. He was excited to have his robots in the Smithsonian.

BARRY SPLETZER: "It was just a project to see how small we could make robots."

FAITH LAPIDUS: Mr. Spletzer came to the museum with a gift box of mini-robots that include the Miniature Autonomous Robotic Vehicle or MARV.

FAITH LAPIDUS: MARV was developed in the nineteen nineties at the Sandia National Lab. Mr. Spletzer says these robotic technologies are finding uses in space exploration, medicine, and security systems. Museum Curator Carlene Stephens hopes the donated robots and others that follow will show the important part science and technology play in everyday life. 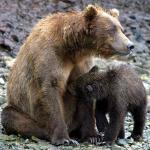 BOB DOUGHTY: The traditional warning to people who hunt, fish or walk in the wild is not to surprise a mother bear protecting her cubs. Female bears with their young are often thought to be a threat to human beings.

But a new report says lone male bears are more dangerous than the females. And the report has suggested that the males may have developed behaviors different from the females.

Stephen Herrero is a retired professor at the University of Calgary in Canada. He led the study of bear behavior. Results of the study were published in the Journal of Wildlife Management.

Mr. Herrero and his team studied records of human deaths from black bear attacks in the wilds of North America. They examined records between nineteen hundred and two thousand nine. They found that sixty-three people died in fifty-nine incidents during that time. The attacks took place in the United States and Canada.

FAITH LAPIDUS: Black bears are more common in North America than brown bears or the brown bear known as a grizzly. Many experts also say black bears are by far the least aggressive.

Published reports say up to nine hundred thousand black bears live in North America. Mr. Herrero says the animals are safer to be around than dogs, snakes or bees.

Black bears have killed about two people a year over the past ten years. The researchers blamed most of the deadly attacks on bears searching for food. The report says eighty-eight percent of bears in those attacks acted like a predator. In other words, they captured and fed on other animals. And ninety-two percent of the bears that showed predatory behavior were male.

Each of the deadly attacks considered predatory was made by a single bear acting alone.

BOB DOUGHTY: Mr. Herrero says people who have training can learn to recognize a predatory bear. He says a demonstration of strength does not mean that the bear means to kill a person.

Mother bears with cubs are a good example. When they see people, he says, they often run at them and make a lot of noise. The professor says, "They want you to think they will eat you alive. But they almost always stop." He advises people to back off quietly.

By comparison, he says the predatory male follows people. The bear senses that the people are targets, perhaps for food. Then it silently attacks its target. Mr. Herrero advises aggressive action. "Fight back," he says.

The study found that a killer male may be starving. But he also may not be hungry.

FAITH LAPIDUS: Other findings from the report confirm some commonly accepted beliefs about bears. For example, one or two people are more likely to be targets than a group. And bears that have killed a human are more likely to kill again.

The study also confirms other widely held beliefs about bears. For example, the report says people's food and containers for waste attract bears. And it says bears that live around humans do not usually carry out deadly attacks.

To those questions, he notes that the human population has grown greatly in the past half century. He says there are more people in the woods for both recreational and business activities. This means increased chances for attacks.

BOB DOUGHTY: How can you recognize a black bear? It may not be easy. Surprisingly, not all black bears are completely or even partly black. Some have large areas of black fur. But they may have brown noses and white areas on their chests. Other kinds of black bears appear silver or have other colors.

FAITH LAPIDUS: Sometimes bears, both male and female, can be victims. Vehicles and logging operations can harm them. And killing bears is popular in some parts of North America. But many places on the continent ban it. Or they limit the period when these animals may be hunted.

Several American states list black bears as threatened. Mexican officials call them endangered. But Defenders of Wildlife says populations in the United States and Canada are staying the same or growing.

BOB DOUGHTY: Some areas are taking steps to protect black bears. For example, many black bears have been in the path of recent floodwaters in the American south.

During recent flooding in Louisiana, officials considered wildlife as well as humans when they delayed opening the Morganza flood barriers. The officials said they hoped black bears would have time to escape to safer ground.

The officials also warned people that they may catch sight of displaced black bears. They said the water may cause the bears to go where they have never been before.

FAITH LAPIDUS: This SCIENCE IN THE NEWS was written by Brianna Blake and Jerilyn Watson. I'm Faith Lapidus.

BOB DOUGHTY: And I'm Bob Doughty. You can find transcripts, MP3s and podcasts of our programs at 51voa.com. Join us again next week for more news about science in Special English on the Voice of America.