Mubarak Moves to Replace Government in Egypt After Protests Intensify

Update Required To play the media you will need to either update your browser to a recent version or update your Flash plugin.
By VOA
2011-1-28 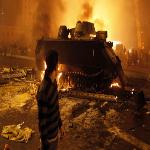 Photo: Reuters
A protester looks on as an Egyptian Army vehicle burns in downtown Cairo on Friday

Egypt is a nation of eighty million people -- the largest in the Arab world. Hosni Mubarak came to power in nineteen eighty-one.

The president said early Saturday that he had asked his government to resign and would quickly appoint a new cabinet. Mr. Mubarak promised political and economic reforms and said days of protests were a plot to weaken Egypt.

A spokesman for President Obama urged the Egyptian government and protesters to show "strong restraint." He said the United States would be "reviewing" its assistance program to Egypt. 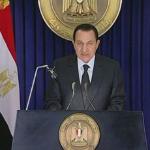 Secretary of State Hillary Clinton urged the Egyptian government to end what she called "the unprecedented steps it has taken to cut off communications." She also called for economic, political and social reforms.

HILLARY RODHAM CLINTON: "We want to partner with the Egyptian people and their government to realize their aspirations to live in a democratic society that respects basic human rights. When I was recently in the region I met with a wide range of civil society groups, and I heard from them about ideas they have that would improve their countries. The people of the Middle East, like people everywhere, are seeking a chance to contribute and to have a role in the decisions that will shape their lives."

Egypt's largest opposition group, the Muslim Brotherhood, has said it will join the protests.

But not all the people in the streets were demanding the removal of Mr. Mubarak.

"The average Egyptian is suffering from low wages," says this man in Cairo. "All we want is a solution to this."

On Thursday, President Obama discussed the situation during an appearance on YouTube. He said President Mubarak has been an American ally on important issues. But he also said the need for political reform in Egypt has long been evident.

BARACK OBAMA: "I've always said to him that making sure that they are moving forward on reform, political reform, economic reform, is absolutely critical to the long-term well being of Egypt. And you can see these pent-up frustrations that are being displayed on the streets."

Stephen Cook, a Middle East expert for the Council on Foreign Relations, returned to Washington from Cairo late Thursday.

STEPHEN COOK: "There have been demonstrations going on in Egypt regularly throughout the last five or six years."

But he says demonstrations held Tuesday on the Egyptian holiday of Police Day gained strength because of the revolution in Tunisia.

Other Arab countries facing protests include Jordan and Yemen, where President Abdullah Saleh has held power for more than thirty years.

And that's IN THE NEWS in VOA Special English. For more news, go to 51voa.com. I'm Steve Ember.