Music Stars Share Their Trade with Kids at Grammy Camp

Update Required To play the media you will need to either update your browser to a recent version or update your Flash plugin.
By June Simms
2011-12-13 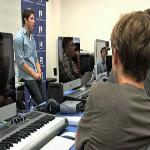 MARIO RITTER: Welcome to Explorations in VOA Special English. I'm Mario Ritter. This week, find out about the Mars Science Laboratory known as "Curiosity." The American space agency launched the planetary explorer in November. Faith Lapidus tells us about Curiosity.

And we tell about the art work of the famous jeweler Karl Faberge. He created some of the most beautiful -- and valuable -- jewelry ever made for the imperial family of Russia. Bob Doughty tells us about a recent show of his work.

But first, Barbara Klein tells us about a camp where young people learn what it takes to become a music star.

BARBARA KLEIN: Getting a job in the music business is not easy. But getting advice from people who have already succeeded could help. That is the hope of more than one hundred young musicians who attended a camp in Los Angeles this past summer. Nick Jonas of the Jonas Brothers told the wannabe stars about the importance of social media.

NICK JONAS: "Social media was incredibly important for my brothers and I at the beginning of our career and still is today. With Twitter and YouTube and Facebook, there are so many instant ways to connect with your fans."

BARBARA KLEIN: Other music professionals also shared their knowledge at the week-long camp. The event is part of "Grammy in the Schools," a project from the organizers of the music industry's Grammy Awards.

The summer camp gives students a chance to improve their music industry skills. Ben LoPiccolo worked on his skills as a music reporter.

BEN LOPICCOLO: "I found that I really enjoyed writing and telling people about music that I like to kind of expand their taste."

BARBARA KLEIN: These teenagers hope to be part of an industry that is going through big changes. Kristen Madsen at the Grammy Foundation points to the influence of social networking on sites like Facebook and Twitter.

KRISTEN MADSEN: "I would say that that's probably the biggest theme that you can see, is watching the artists and the professionals come through and talk about, there are new ways and new roadmaps for kids to succeed in the music industry, and they have a lot more access to doing it themselves."

BARBARA KLEIN: Thirteen-year-old Greyson Chance was preparing to release his first album. He says his career began with a music video on YouTube.

Camper Giovanni Quattrochi was hoping for a career as a music producer. He likes the way music is changing.

GIOVANNI QUATTROCHI: "Especially with hip-hop, there's a lot of sampling of different genres of music. And I think I'm excited to see where music is going to go."

ELISE GO: "I'm also pretty excited. I think it's very cool, like I'm really interested in Korean and Asian-genre music. So it's like Korean and Chinese pop music, and they're like fusing American influences into their music, and I feel that's very cool to hear, like a pop song you think you'd hear on the radio in America, in like another language."

BARBARA KLEIN: Brian London plays keyboard for Lady Gaga and other artists. He told the students that succeeding in music takes more than just having skills.

BARBARA KLEIN: The musicians say most of all it takes a love of music to succeed in this exciting and ever changing business. I'm Barbara Klein.

For the latest music videos and interviews with performers, visit Border Crossings at voamusicmix.net. You'll also find listening information and audio of our radio broadcasts. Call or Email us during the show and tell us what you want to hear!

I will read your dedication on the air and play your song.

FAITH LAPIDUS: The American space agency launched its Mars Science Laboratory, also known as "Curiosity," in November of 2011. The car-sized vehicle is supposed to land on Mars in August 2012.

"Curiosity" is supposed to land at the foot of a mountain within a deep, 150-kilometer-wide hole called Gale Crater. Deputy project scientist Ashwin Vasavada tells about "Curiosity."

ASHWIN VASAVADA: "This is a Mars scientist's dream machine.  We're so excited to have this rover going to Mars this year. It's going to be the virtual presence for over 200 scientists around the world to explore Mars and Gale Crater that we'll talk about. This rover is not only the most technically capable rover ever sent to another planet, but it's actually the most capable scientific explorer we've ever sent out."

FAITH LAPIDUS:  "Curiosity" is much larger than earlier rovers.  It has a plutonium-fueled nuclear reactor that will provide plenty of power for "Curiosity's" many activities. The vehicle also has 17 cameras, and a laser that can examine the chemical make-up of rocks.

ASHWIN VASAVADA: "What really dominates the design of this rover is the fact that it has this ability to sample rocks and soils on Mars for the first time, and so it has a big six-foot [1.8 meter] robotic arm. And the rover is partly that big because it holds two very capable scientific laboratories inside the rover."

FAITH LAPIDUS: One instrument measures the minerals in rocks and soil. Another looks for chemicals and any organic material that might be present.

The goal of the experiment is to learn if Mars ever had environmental conditions that could have supported microorganisms.

ASHWIN VASAVADA: "This mission is really about looking for those habitable environments, and not detecting life itself."

FAITH LAPIDUS:  Vasavada says the mountain within Gale Crater will provide plenty of information about the development of Mars. That is because each layer of rock contains new clues.

ASHWIN VASAVADA: "It has some geologic evidence that water was around.  We hope, in fact, to search for organics with this mission.  That's another requirement for life as we know it."

FAITH LAPIDUS:  The nuclear reactor on "Curiosity" has enough power to operate on the surface of Mars for about two Earth years, which is the same as one Martian year. I'm Faith Lapidus.

MARIO RITTER: You are listening to the VOA Special English program EXPLORATIONS. Next, Bob Doughty tells us about the famous jeweler Karl Faberge and his works of art for the Tsars of Russia.

BOB DOUGHTY:  Many people are interested in the beautiful objects created by the jeweler Karl Faberge. Geza von Habsburg recently organized a show of his work at the Virginia Museum of Fine Arts.

He says people are interested in the work of Faberge because of its link to the last tsar of Russia. Nicholas II and his family were murdered in 1918 during the Russian Revolution.

GEZA VON HABSBURG: "One of the major reasons why people bought and buy Faberge is the connection of Faberge's art and of Faberge with the imperial family. He was very close to them and they commissioned things for their personal use." 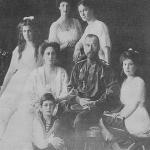 Many of Karl Fabergé's most famous pieces were created for the last tsar of Russia, Nicholas II and his family, who were murdered in 1918 during the Russian revolution.

BOB DOUGHTY:  Geza von Habsburg gathered more than 500 objects for the exhibit. They included seven of the jeweler's most famous works, the Imperial Easter eggs.

BOB DOUGHTY:  Alex Nyerges is director of the Virginia Museum of Fine Arts. The museum has five Imperial Easter eggs.

ALEX NYERGES: "The eggs are miraculous, marvelous works of detail. They are not just works of art in terms of beauty, but they are mechanically precise."

BOB DOUGHTY:  Each Faberge egg has moveable parts and a surprise inside.

The most valuable ones are said to be worth 25 to 30 million dollars. They were made as Easter gifts, for the wife of Alexander III. His son, Nicholas II, continued the tradition.

The Imperial Easter Eggs represent only a part of Karl Faberge's production. During his career, his business produced over 150,000 unique objects. Not all were for the tsar's family. A crystal Egg was made for Emanuel Nobel, nephew of Alfred Nobel, the man for whom the Nobel Prize is named.

BOB DOUGHTY:  What they did not destroy, they sold.

ALEX NYERGES:  "These works started coming out of Russia in the 1920s and the 1930s, and there was a great, great mania for collecting Faberge starting in the 1930s in this country. And there were a couple of very key collectors."

BOB DOUGHTY:  Lillian Pratt was one of them. When she died in 1947, she left more than 150 of her Faberge pieces to the Virginia Museum in Richmond. Today it has the largest collection of Faberge outside of Russia.

As for Faberge, he fled Russia during the revolution. He died in Switzerland two years later, but his works of art live on. I'm Bob Doughty.

This program was written by June Simms. Our announcers were Barbara Klein, Faith Lapidus and Bob Doughty. I'm Mario Ritter. You can watch video versions of these stories on our website, 51voa.com.