Update Required To play the media you will need to either update your browser to a recent version or update your Flash plugin.
By VOA
2012-2-8 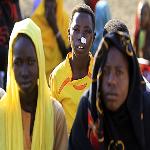 A new campaign aims to fight ten diseases that affect many of the world's poorest people but do not get much attention. Officials last week announced the London Declaration on Neglected Tropical Diseases.

The diseases include conditions like sleeping sickness, guinea worm and leprosy. They affect more than a billion people worldwide.

The effort involves thirteen drug companies and the governments of the United States, the United Kingdom and the United Arab Emirates. It also includes the Bill and Melinda Gates Foundation, the World Bank and health groups.

The campaign promises almost eight hundred million dollars for drug donation programs. Stephen O'Brien, a member of the British Parliament, was at the launch.

STEPHEN O'BRIEN: "We will increase our financial investment and cumulative spending five-fold, from fifty million pounds ($79 million) to 245 million pounds ($387 million) by twenty-fifteen. That is four treatments a second."

The United States Agency for International Development says neglected tropical diseases, or NTDs, cost governments and businesses ten billion dollars a year. This is in lost productivity and treatment costs.

Dr. Donan Mmbando is with the Tanzanian Ministry of Health and Social Welfare.

DONAN MMBANDO: "The plight of people with the neglected tropical diseases is so real in my country. You need to see people with severe itching, lizard skin, which is a manifestation of river blindness."

The declaration calls for control or elimination of the ten diseases by twenty-twenty.

Margaret Chan is director-general of the World Health Organization.

MARGARET CHAN: "Just think of the prospect of freeing millions of people -- most of them are children and women -- so that they could have a healthy and productive life."

The Gates foundation is giving three hundred sixty-three million dollars to the campaign. Bill Gates talked about the lifelong harm to children with parasitic infections.

BILL GATES: "The parasitic load that young kids have of those worms means that they are malnourished in a way that their brain never fully develops. So the rest of their life they are permanently impacted by this."

There have been many campaigns against neglected tropical diseases. Dr. Neeraj Mistry of the Global Network for Neglected Tropical Diseases says those earlier efforts were not very effective because access to drugs was limited.

NEERAJ MISTRY: "It's only through now with the raised awareness and increased commitments from the drug companies, as well as foundations like the Bill and Melinda Gates Foundation, and the U.S. and the U.K. government, that we can actually take the response to NTDs to scale, which means that we can treat more communities and more people that would get rid of the parasite and avoid reinfection."

The thirteen drug companies have agreed to share information that could speed up the development of new treatments to help the world's poorest people.