Update Required To play the media you will need to either update your browser to a recent version or update your Flash plugin.
By VOA
2011-9-21 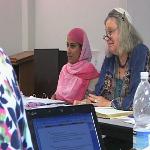 Photo: VOA
Claremont Lincoln University in California is a new graduate school made up of Christian, Muslim and Jewish institutions

Claremont Lincoln University in California is a new graduate school for religious education. It hopes to change the way religious leaders in the United States are educated.

The school will train Muslim, Jewish and Christian clergy together. Administrators think this is the first "interreligious university" of its kind.

The university is east of Los Angeles. It offers master's degree programs in interreligious studies and Muslim leadership.

Three institutions founded Claremont Lincoln. One of them is the Claremont School of Theology, where the university is located. The other founders are the Academy for Jewish Religion, California, and the Islamic Center of Southern California.

Students from one institution may take courses at the others. The Islamic school is just beginning its programs. The founders hope to begin training imams sometime next year.

David Lincoln is chairman of the board of Claremont Lincoln. He and his wife, Joan, donated fifty million dollars to the university.

DAVID LINCOLN: "The religions will be promoting peace in the world and not fighting each other. In a lot of places now they fight each other, and if the religions could encourage solutions to the problems, then the problems would be solved and we'd all be better off."

Jihad Turk is director of religious affairs for the Islamic Center of Southern California. He says this way of educating religious leaders will send a message.

JIHAD TURK: "It will demonstrate to the world that the United States is not on a war against the Muslim world or the Islamic faith, but that there is great support from private institutions from the public at large and by the government as well that recognizes that Islam and Muslims are on the side of peace."

Ebrahim Rasool, South Africa's ambassador to the United States, recently spoke at the university. He says interfaith cooperation is a way to balance extremism.

EBRAHIM RASOOL: "Anyone can step into the breach and claim to be speaking for God, and unless the middle ground is able to establish what is God's purpose, we will cede more and more ground to the fundamentalists."

Reverend Campbell says he hopes to bring more religions to Claremont Lincoln, including the Bahai faith. An International School of Jain Studies will offer short-term exchange programs and seminars on Jainism, a religion from India.

Reverend Campbell says the goal is to unite people to promote religion as a source of healing, compassion and peace.

And that's the VOA Special English Education Report. You can find a link to a video about the school at 51voa.com. I'm Christopher Cruise.