Update Required To play the media you will need to either update your browser to a recent version or update your Flash plugin.
By Jerilyn Watson, June Simms and Caty Weaver
2011-10-6

Photo: Sherry Griffin
A pendant by Pablo Picasso, who often created jewelry for his lovers

I'm Doug Johnson. Today we listen to new music from singer Tony Bennett and some of his friends. We also tell you about some of the issues that will come before the Supreme Court this term. But, first, we take you to a museum exhibit of jewelry that was made by famous artists including Picasso.

DOUG JOHNSON: Not many people would think of the artist Pablo Picasso as a creator of art you can wear. But a necklace by Picasso currently can be seen in New York City. It is one of about two hundred pieces of jewelry at the Museum of Arts and Design. Shirley Griffith has more about this unusual exhibit.

SHIRLEY GRIFFITH: The exhibit is called "Picasso to Koons: Artist as Jeweler." You probably will recognize the names of many of the more than one hundred artists represented at the show. Names like Georges Braque, Max Ernst, Alexander Calder and Salvador Dali, Robert Rauschenberg and Louise Nevelson.

One hundred thirty of the rings, necklaces and brooches are from the collection of art expert Diane Venet. She helped to set up the exhibit.

Ms. Venet met French sculptor Bernar Venet about twenty-six years ago. A short time later, he gave her a piece of silver designed as a ring. The ring celebrated the fact that they would soon be married. Ms. Venet said it was the first piece of an artist's jewelry she had ever had.

As time passed, Bernar Venet exchanged pieces with artist friends who sometimes created jewelry. Ms. Venet's personal collection grew and grew, and she decided to exhibit it with works of the other artists.

Holly Hotchner is the director of the Museum of Arts and Design. She says the museum considers jewelry as one of the most important forms of art today. She notes that a piece of jewelry is not just a small version of a sculpture.

HOLLY HOTCHNER: "The idea is not to take a sculpture and then miniaturize it. The idea is to come up with a concept that really relates to the body."

One notable object in the collection is Picasso's Grand Faune pendant. A faun represents a forest god. Roman mythology says it is half man and half animal. Picasso used this imagined creature in many drawings. His pendant is among eight Picasso jewels in the exhibit. It belongs to Ms. Venet. She never met Picasso, but she knows his story well.

Another piece in the collection of Ms. Venet is a necklace of gold painted on titanium. This piece is from one of her friends, artist Frank Stella.

Jeff Koons, like Frank Stella, is a living artist. He is known for his huge sculptures, including one of a young dog. This thirteen meter tall sculpture once stood at New York's Rockefeller Center.

Jeff Koons also created an extremely small bunny on a chain that can be seen at the museum. Ms. Hotchner said he did this by using a steel bunny the size of a human as a model for the jewelry he created.

HOLLY HOTCHNER: "He certainly has made, and it's sort of, part of, his ethic and part of the way he approaches making, that he has made work that is small in scale, enormous in scale."

Bernar Venet also is represented in the exhibit. The show will continue at the Museum of Arts and Design through January eighth.

The United States Supreme Court opened a new term this week. Legal experts say the court will likely rule on some of the most important issues facing the country. 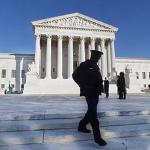 The court is expected to decide if President Obama's health care reform law is constitutional. Several individuals and states have brought cases against the law in lower courts. Obama administration officials recently asked the Supreme Court to rule on the issue.

At the center of the debate is whether or not the new legal requirement for Americans to buy health care insurance is constitutional. The health care law has faced resistance from many people, some of whom call the measure Obama care.

One group that opposes the law released a statement last Monday. Repealhealthcareact.org says it has collected more the one and a half million signatures from Americans who oppose the Patient Protection and Affordable Care Act. The group says that represents the second largest number of signatures ever collected for a public policy issue in the United States.

The health care law has been a main point of attack for candidates seeking the presidential nomination of the Republican Party. Texas Governor Rick Perry promised to strike down the law during a recent appearance in New Hampshire.

RICK PERRY: "On my first day in office I will pull out probably a Sharpie and I will put my signature to an executive order to wipe out as much of Obama care as I can, using that technique."

Legal experts say it is not clear how the Supreme Court will decide the case. Miguel Estrada argued several cases in front of the court as a Justice Department official in the nineteen nineties.

MIGUEL ESTRADA: "The issues are really hard. Every time you ask the Supreme Court to overturn an act of Congress, it is a very difficult thing for the court to do. And Congress comes to the Supreme Court with a presumption of deference and constitutionality."

That respect for Congress and the work that it does will probably guide the Supreme Court's consideration of the health care law.

Health care is not the only big issue the court is expected to rule on this term. Another could be an immigration law in Arizona. That law lets police officers request immigration papers from anyone they suspect is in the country illegally. The Obama administration opposes the measure. It says the Arizona law could lead to people being unfairly targeted because of their race.

The court is also expected to hear major cases involving free speech and privacy. Caroline Fredrickson is president of the American Constitution Society.

CAROLINE FREDRICKSON: "The Supreme Court's October 2011 term has the potential to be a real blockbuster. Already on the court's docket are questions about whether the government can place a GPS tracking device on a suspect's car without first obtaining a warrant." The Supreme Court often gives split decisions. Four of its more conservative members commonly vote together as a group. Four other justices who are more liberal also vote together. In the past, Justice Anthony Kennedy provided the deciding vote in many cases.

DOUG JOHNSON: This week, singer Tony Bennett is enjoying the number one position on Billboard's magazine top two hundred albums chart. The singer's new album, "Duets II," is also his first to rise to that position. Mario Ritter has more.

DOUG JOHNSON: That was Tony Bennett and music superstar Aretha Franklin singing "How Do You Keep the Music Playing?" Bennett performs with sixteen other big names on "Duets II." Some of the artists also worked with him on "Duets: An American Classic" from two thousand six. Like Michael Buble. On the new album, they sing, "Don't Get Around Much Anymore." 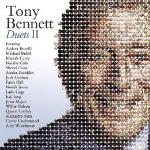 Sheryl Crow is a new partner in song for Tony Bennett. Here they perform "The Girl I Love ."

Tony Bennett's first "Duets" album was released in connection with his eightieth birthday. "Duets II" celebrates his eighty-fifth on August third. We leave you with Tony Bennett and Lady Gaga performing "The Lady is a Tramp."