Obama Calls for Economy Where 'Everyone Does Their Fair Share'

Update Required To play the media you will need to either update your browser to a recent version or update your Flash plugin.
By VOA
2012-1-27 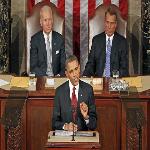 This week, President Obama gave his State of the Union speech, the last one before he seeks re-election in November.

BARACK OBAMA: "Tonight I want to speak about how we move forward and lay out a blueprint for an economy that is built to last -- an economy built on American manufacturing, American energy, skills for American workers and a renewal of American values."

Tuesday night, Mr. Obama told Congress and the nation that "the renewal of American leadership can be felt across the globe."

BARACK OBAMA: "Anyone who tells you that America is in decline or that our influence has waned, does not know what they are talking about."

He also talked about what he called "the defining issue of our time."

BARACK OBAMA: "We can either settle for a country where a shrinking number of people do really well, while a growing number of Americans barely get by. Or we can restore an economy where everyone gets a fair shot and everyone does their fair share and everyone plays by the same set of rules."

On foreign policy issues, he noted that for the first time since two thousand three, no Americans are fighting in Iraq. He spoke about progress in Afghanistan, where American troops are beginning to withdraw. He also discussed the killing of Osama bin Laden and the "wave of change" across the Middle East and North Africa. He noted that today, in Libya, Moammar Gadhafi "is gone."

BARACK OBAMA: "And in Syria, I have no doubt that the Assad regime will soon discover that the forces of change cannot be reversed, and that human dignity cannot be denied."

The president said American-led international pressure on Iran is having an effect. He said he "will take no options off the table" to prevent Iran from getting a nuclear weapon.

BARACK OBAMA: "But a peaceful resolution of this issue is still possible, and far better. And if Iran changes course and meets its obligations, it can rejoin the community of nations."

President Obama did not talk about issues such as North Korea, Middle East peace efforts or the European debt crisis. Daniel Serwer at the Johns Hopkins University School of Advanced International Studies in Washington says that was because of the election campaign.

DANIEL SERWER: "It seems to me very significant that a lot was left out and that the president is trying to refocus away from broad international commitments and toward some very specific, mostly domestic commitments."

The president did talk about China's trade policies. He announced plans to create a Trade Enforcement Unit to investigate reports of unfair trade practices.

Governor Mitch Daniels of Indiana gave the Republican Party reaction to the State of the Union speech. He called Mr. Obama's policies extreme and "pro-poverty."

MITCH DANIELS: "No feature of the Obama presidency has been sadder than its constant efforts to divide us, to curry favor with some Americans by castigating others. As in previous moments of national danger, we Americans are all in the same boat."

The day after his speech, the president began a three-day trip to five states across the country. The states were Iowa, Nevada, Arizona, Colorado and Michigan. All are considered political "swing states," which could help decide the election.

In the Nevada, for example, the president discussed his proposals for increasing American energy development while protecting the environment. Republicans denounced his recent rejection of a proposed pipeline to move natural gas from Canadian tar sand fields to Texas.

The four remaining candidates for the Republican nomination debated in Florida Thursday night. It was their last debate before that big southern state holds its primary election on Tuesday.