Obama Looks for Hope in Exports to Create Jobs

Update Required To play the media you will need to either update your browser to a recent version or update your Flash plugin.
By Mario Ritter
2010-7-8 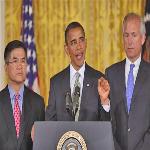 Photo: AP
President Obama speaking Wednesday at the White House about exports, jobs and the economy. With him were Commerce Secretary Gary Locke, left, and Jim McNerney Jr., chief executive officer of Boeing.

The International Monetary Fund has raised its prediction for world economic growth to four and six-tenths percent this year. That is a half-percentage point higher than the estimate in April.

The IMF credited expansion in Asia and growing demand in the United States. But the lender's chief economist also warned that "downside risks have risen sharply."

President Obama talked this week about the importance of building exports as a way to create jobs and economic growth at home.

BARACK OBAMA: "American exports grew almost seventeen percent over the first four months of this year, compared to the same period last year. Part of this, of course, is due to the global recovery. But we are also moving forward on improving conditions for America's exporters."

Mr. Obama re-launched the President's Export Council. The group includes business and labor leaders who will advise on trade issues.

Last week the government reported that private employers added only eighty-three thousand jobs in June. Unemployment remains high even after six months of job growth. As the president points out, there are still five unemployed workers for each job opening.

In January, in his State of the Union speech, President Obama promised to double exports in five years. In his comments Wednesday, he said the United States must work to remove trade barriers and open new markets.

He said the United States offers some of the world's lowest barriers to trade -- and expects free and fair access to other countries in return.

In late June, the World Trade Organization ruled that Airbus received billions in illegal European aid. The ruling was a victory for its American competitor Boeing.

American lawmakers have also long complained that China suppresses the value of the yuan to lower the price of its exports. China recently promised to let the yuan trade more freely against the dollar.

Some American companies have been doing well in developing markets. For the first time, General Motors has announced higher sales in China, the world's largest car market, than in the United States.