Update Required To play the media you will need to either update your browser to a recent version or update your Flash plugin.
By VOA
2011-9-9 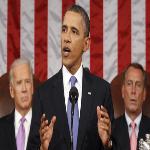 President Obama is urging Congress to approve a plan designed to create jobs. He announced his proposals Thursday night in a speech to Congress.

BARACK OBAMA: "I am sending this Congress a plan that you should pass right away. It's called the American Jobs Act. There should be nothing controversial about this piece of legislation. Everything in here is the kind of proposal that's been supported by both Democrats and Republicans -- including many who sit here tonight. And everything in this bill will be paid for. Everything."

The plan will cost almost four hundred fifty billion dollars. As a spending bill, it goes first to the House of Representatives, which the Republican Party controls.

The speech followed months of political battles over how to lower federal budget deficits and the fourteen-trillion-dollar national debt.

A compromise in July provided for one trillion dollars in spending cuts over the next ten years. In return, Congress raised the government's debt limit. But that deal failed to prevent a reduction in the nation's credit rating.

In his message, Mr. Obama called on Republicans and democrats to stop arguing and put people back to work.

BARACK OBAMA: "The people of this country work hard to meet their responsibilities. The question tonight is whether we'll meet ours. The question is whether, in the face of an ongoing national crisis, we can stop the political circus and actually do something to help the economy."

His jobs plan includes extended cuts in the payroll tax for workers and employers. It also includes assistance for businesses that add workers.

The plan aims to put people to work repairing and modernizing roads, railways, airports, waterways and at least thirty-five thousand schools. It also includes financial aid to state and local governments and job training to help the long-term unemployed. And it includes steps to increase the employment of military veterans.

The president said he will release a deficit plan a week from Monday. It will not only cover the cost of the jobs bill, he said, but deal with debt in the long term.

The recent budget compromise created a twelve-member congressional committee. That committee has until late November to identify one and a half trillion in additional savings over the next ten years.

Representative Steve King of Iowa said he did not believe the House would pass the whole bill.

STEVE KING: "I am really doubtful if there is going to be a movement in this House to pick up a package. There might be a couple of things that we could try to lift out of it. I am not sure what they are at this point."

Mr. Obama also urged Congress to approve trade agreements with Panama, Colombia and South Korea. That was one of the few times in the speech when Republicans stood and cheered. Most Democrats stayed seated.

Mr. Obama said some lawmakers might feel that differences can be settled only by voters at the ballot box. But he said Americans who are struggling financially need a Congress that will act now.

Opinion polls show that most Americans have lost hope that politicians can bring down the high unemployment rate. Currently the national rate is 9.1 percent.