Update Required To play the media you will need to either update your browser to a recent version or update your Flash plugin.
By VOA
2012-1-6 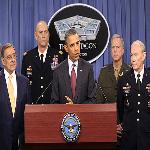 This week, President Obama announced a new defense plan based on budget cuts in the coming years.

BARACK OBAMA: "Our military will be leaner, but the world must know the United States is going to maintain our military superiority."

Mr. Obama said details of the defense budget will be announced in the coming weeks. But he said Asia and the Middle East will get greater attention.

BARACK OBAMA: "As I made clear in Australia, we'll be strengthening our presence in the Asia Pacific, and budget reductions will not come at the expense of this critical region. We're going to continue investing in our critical partnerships and alliances, including NATO, which has demonstrated time and again -- most recently in Libya -- that it's a force multiplier. We will stay vigilant, especially in the Middle East."

Mr. Obama spoke Thursday in a rare presidential appearance in the press briefing room at the Pentagon -- the Defense Department headquarters. He said the nation is at a "moment of transition" after ten years of war.

BARACK OBAMA: "As we look beyond the wars in Iraq and Afghanistan, and the end of long-term, nation-building with large military footprints, we will be able to ensure our security with smaller conventional ground forces. We'll continue to get rid of outdated Cold War-era systems so that we can invest in the capabilities we need for the future, including intelligence, surveillance and reconnaissance; counterterrorism; countering weapons of mass destruction; and the ability to operate in environments where adversaries try to deny us access."

The president ordered a strategic review last year to help guide decision-making by the Defense Department. American military policy is currently designed to be prepared to fight and win two wars at once. Secretary Panetta said that idea was a "residual of the Cold War." He said this, in some ways, restricted thinking about the future.

LEON PANETTA: "Our strategy review concluded that the United States must have the capability to fight several conflicts at the same time. We are not confronting obviously the threats of the past, we are confronting the threats of the twenty-first century, and that demands greater flexibility to shift and deploy forces to be able to fight and defeat any enemy anywhere."

The defense secretary said troop numbers would be cut. But he said the United States will protect and in some cases increase its investments in areas such as special operations and cyberspace.

For some defense experts, including Michael O'Hanlon at the Brookings Institution in Washington, the new strategic plan makes sense.

MICHAEL O'HANLON: "It's been in discussion for twenty years, and it's even more feasible now with Saddam Hussein gone from Iraq, and I think it's also responsive to the set of threats we face today where more of them are likely to be at sea or in the air -- from Iran, for example."

But former defense official Frank Gaffney, now president of the Center for Security Policy, says the new strategy has many problems.

FRANK GAFFNEY: "It may not be up to us how many wars we have to fight. Enemies who perceive us unable to deal with more than one problem at a time may decide to collaborate and work in a simultaneous fashion that will simply overtax us. And worse, the perception that we are so weak as to be unable to deal with that sort of danger invites it."

The defense budget for this year is about five hundred thirty billion dollars. Mr. Panetta said the new strategy aims to cut about four hundred eighty-seven billion dollars over ten years. However, the military may face more than five hundred billion dollars in additional cuts as Congress and the president seek to reduce the federal deficit.