Update Required To play the media you will need to either update your browser to a recent version or update your Flash plugin.
By Kent Klein, Greg Flakus and Mike O'Sullivan
2010-7-2 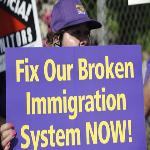 Photo: ASSOCIATED PRESS
A demonstrator protests Arizona's immigration law in Los Angeles before the start of a Los Angeles Dodgers' baseball game with the Arizona Diamondbacks in May. Some people have called for a boycott of Arizona products because of the law

One of Barack Obama's campaign promises was to reform immigration policies. On Thursday he gave his first major speech on the issue as president.

BARACK OBAMA: "In sum, the system is broken. And everybody knows it."

One reason for the speech was the state of Arizona's recent passage of its own law against illegal immigration. That law has led to protests around the country. However, in public opinion surveys a majority of Americans support it. Mr. Obama criticized the law, but said such laws are the understandable result of inaction at the federal level.

After his speech, religious leaders demonstrated to call for Congress to act this year. Rabbi Michael Feingold works with immigrant and low-wage workers in New York.

The president said reform must be comprehensive, dealing not just with future immigrants but also those here now. An estimated eleven million are undocumented.

BARACK OBAMA: "They must be required to admit that they broke the law. They should be required to register, pay their taxes, pay a fine and learn English. They must get right with the law before they can get in line and earn their citizenship." 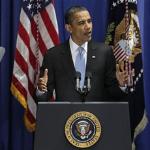 President Obama speaking on immigration at American University in Washington

In his speech the president did not announce any new proposals. Even after his appeal, Congress may consider the issue too divisive to deal with before the November elections.

In Arizona, officers are now being trained in the new law set to take effect July twenty-ninth. It requires police to confirm the immigration status of a person they meet during a lawful stop. That is only if the police have "reasonable suspicion" that the person is in the country illegally.

The law bars police from detaining anyone based on ethnic or racial appearance. But Hispanics and others say it could still lead to racial profiling. They say people, including legal residents and American citizens, could be unfairly targeted. Police say one thing that makes discussion of this law difficult is that many critics have not read the law.

Tucson police Sergeant Fabian Pacheco also notes that forty percent of officers in his city are Hispanic. Still, he says he worries that more people will avoid cooperating with the police, and that officers will have less time to fight more serious crimes.

Some also worry that officers could be sued under the law by people who accuse them of not doing enough enforcement. At the same time, civil rights activists could accuse them of being too aggressive.

The Obama administration and some Arizona cities hope to persuade a judge to block the new law. 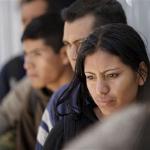 A woman waits for officials in Nogales, Mexico, after being expelled from the United States

Arizona has become the point of entry for more than forty percent of illegal entrants from Mexico. The numbers grew after the federal government increased border controls in California and Texas.

Some Arizona officials blame smugglers for a serious problem with kidnappings in the Phoenix area. Drug groups control much of the human smuggling. Some border crossers are victims of violence. Others die crossing the desert. An Arizona rancher was also killed this year -- probably, officials say, by a Mexican drug smuggler.