Update Required To play the media you will need to either update your browser to a recent version or update your Flash plugin.
By Mario Ritter and Jerilyn Watson
2010-10-18

BARBARA KLEIN: This is SCIENCE IN THE NEWS in VOA Special English. I'm Barbara Klein.

BOB DOUGHTY: And I'm Bob Doughty. Today, we will tell how technology could help doctors meet demand for transplant organs. We also will tell about a scientific effort to explain an event described in the holy books of three religions.

BARBARA KLEIN: Many people are waiting for an organ that could save or improve their lives. In the United States alone, more than one hundred thousand people are candidates for donated organs or tissue. The Organ Donor and Procurement Network supervises organ donation for the government. The private, not-for-profit group says only about fourteen thousand organs were donated in the first six months of this year.

Demand for new organs is far greater than supplies in the United States and other countries. Experts estimate that millions of people around the world need organ transplants.

BOB DOUGHTY: For years, doctors have wondered if there is another way. Researchers have been working to develop machines and processes that can create organs. The idea seems like something from a science fiction movie, but it is very real and showing early results.

In nature, some fish, lizards and worms can re-grow body parts. Replacing human organs is much more complex. Solid organs, like the liver, are dense with specialized cells. Some organs are very large. A human liver, for example, can weigh almost two kilograms. Still, it may be surprising to know that replacement organs have already been grown and successfully placed in patients.

BARBARA KLEIN: Doctor Anthony Atala is Director of the Institute for Regenerative Medicine at the Wake Forest University Baptist Medical Center. He produced new bladders for patients. His team created a base, or scaffolding, that provides a structure for growing cells. Researchers grow cells on the scaffolding, slowly building up tissue that becomes a working organ.

Doctor Atala described the process in a talk recorded by the arts and technology group TED.

BOB DOUGHTY: Growing new organs sounds like something for the distant future. Yet businesses are working on machines that can produce tissue and organs a lot like a photocopier copies documents. 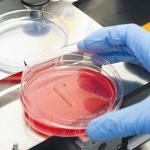 One example is Organovo, a company in the American state of California. Organovo calls itself a regenerative medicine company. Its goal, the company says, is to use printing technology to create tissue for research and surgical operations.

Gabor Forgacs of the University of Missouri helped start Organovo in two thousand seven. This year, he appeared on a list of the one hundred most creative people in business by Fast Company, a business magazine.

Organ printing is in many ways like other three-dimensional printing. The difference is that the printer builds a three-dimensional scaffolding out of a sugar-based material called a hydrogel. The scaffolding serves as the structure on which human cells grow. Different shaped scaffolding can produce blood vessels or other forms of tissue.

BOB DOUGHTY: Another part of the machine places cells at carefully measured positions on the scaffolding using lasers. The machine keeps the cells in conditions that let them grow into tissue and, in time, organs. Organovo calls this its NovoGen three-dimensional printing technology. Workers leave a container around the organ printing machinery to protect the tissue while it grows.

Organovo's device is designed to "print" a new organ. The organ is then removed from the printer and prepared before a doctor places it in a patient. Some researchers believe that bio-printers may one day be able to print organs directly into the body.

BARBARA KLEIN: Three of the world's major religions tell about the prophet Moses parting the Red Sea. The story says he directed the sea to divide so the ancient Israelites could reach the other side. The Israelites escaped slavery in Egypt by walking on dry land. Then the waters rose and flowed again. The waters returned and drowned the Egyptians chasing the Israelites.

The parting of the Red Sea appears in writings holy to Jews, Christians and Muslims. The three versions of the story differ in small ways, but the central information is the same. If true, it describes an event that took place more than three thousand years ago. The story says a strong east wind blew all night, and the sea parted in the morning.

Scientists recently proposed a possible explanation for the division of Red Sea waters. A computer modeling study shows the event might have taken place where a river joined a coastal lagoon along the Mediterranean Sea. The study shows the wind might have pushed back both waterways. That could have made a pathway on the sea floor for Moses' people to cross.

BOB DOUGHTY: Carl Drews of the University of Colorado at Boulder led the study. He also works for America's National Center for Atmospheric Research. A report on the study appeared in the Public Library of Science journal, PLoS One.

Mr. Drews examined information about likely places and depths of Nile River Delta waterways, which have moved over time. He says his results are what he called fairly close to the story in the Bible's book of Exodus. He says the science of fluids in motion can explain the parting of the Red Sea. The wind moves the waters because of physical laws. This creates a safe passage with water on two sides. And later, he says, water can flow back in again.

The Red Sea is sometimes called the Sea of Reeds or the Reed Sea. The new study is part of a larger research project by Mr. Drews. The project explores the effects of winds on water depths. Its aim is to show how severe Pacific Ocean storms can cause storm surges. In a storm surge, seawater moves continuously. The water may reach a height of six meters or more.

Russian scientists Alexei Androsov and Naum Voltzinger studied wind action in an earlier examination of the Red Sea crossing. They proposed conditions with winds blowing from the northwest at one hundred nineteen kilometers an hour. That is just under the wind-speed of a hurricane, a very severe ocean storm. The Russian scientists found the winds might possibly have uncovered an underwater reef close to where the Suez Canal is today.

However, Mr. Drews' study found that the reef would have had to be completely flat for the water to run off in twelve hours. He and his research partner said the strong winds would have created a reef with even deeper channels. They do not believe that the Israelites could have walked across the Red Sea in winds of almost hurricane force.

BOB DOUGHTY: The two researchers found another possible place for the crossing. It is just south of the Mediterranean and about one hundred nineteen kilometers north of the Suez reef. They examined archeological records, satellite measurement and current maps. Then they estimated the water flow and depth that may have existed many centuries ago. They used a computer program to show what would happen with an overnight wind.

Mr. Drews said people have always wanted to know if the story of Moses parting the Red Sea comes from historical facts. He said his study shows that the description of the parting has a basis in physical laws.

BARBARA KLEIN: This SCIENCE IN THE NEWS was written by Mario Ritter and Jerilyn Watson. Our producer was June Simms. I'm Barbara Klein.

BOB DOUGHTY: And I'm Bob Doughty. Be listening again next week for more news about science in Special English on the Voice of America.