How Pain Treatment Has Improved in Recent Years

Update Required To play the media you will need to either update your browser to a recent version or update your Flash plugin.
By Jerilyn Watson
2011-7-18


BOB DOUGHTY: This is SCIENCE IN THE NEWS, in VOA Special English. I'm Bob Doughty.

BOB DOUGHTY: As recently as the nineteen seventies, little research existed about a subject that interests most people at some time. The subject is pain.

Over the years, however, medical studies have led to new hope for patients who are hurting. And, an international movement known as hospice has helped bring attention to difficult-to-treat pain for the dying. 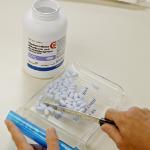 A pharmacy worker in Oklahoma with tablets of hydrocodone, a painkiller

But chronic pain can last a long time. Chronic pain may go away, but it often comes back. It can be hard to treat.

BOB DOUGHTY: Many different diseases, conditions and injuries can cause chronic pain, from back problems to burns. Cancer is one of those causes, whether from the disease itself or from its treatment.

The Sloan-Kettering Memorial Cancer Center in New York City has been a leader in pain research and treatments linked to cancer. The center's Doctor Kathleen Foley has been responsible for part of that gain. In the nineteen seventies, a supervisor asked her if she would like to do clinical research about pain. She was completing her medical education at the center at the time.

STEVE EMBER: Doctor Foley wanted to do the research. But she said she did not know anything about the subject. The head of the center's office dealing with the nervous system said nobody else knew about it, either.

As part of her duties, Kathleen Foley studied treatment of patients dying of cancer in the hospital. She found that the treatment was far from satisfactory. She said patients were often not given medicine to control pain until they were suffering badly. And, their pain could be eased only by injection.

Doctor Foley brought together experts in medicine, drug treatment and basic research to find better methods. A laboratory was created to study recently discovered opiate receptors in the brain.

BOB DOUGHTY: Research published mainly in nineteen seventy-three had found proteins on the surfaces of nerve cells in the brain. The findings made it possible to better study pain drugs and learn how they affect the body.

Today many doctors order pain medicines for dying patients to be given before suffering takes hold. And more methods of administering the medicines are now available. One is a pump that lets patients give themselves pain medications as needed. They cannot harm themselves because the amount of painkiller in the pump is carefully measured and limited.

STEVE EMBER: Doctor Foley notes another development in pain care. It is the continual monitoring, or observation, of patients' conditions. A continually monitored person is not left alone to suffer.

Kathleen Foley was named to head Sloan Kettering's new Pain Service within the Department of Neurology in nineteen eighty-one. It was America's first such hospital medical service to identify itself this way. Today, the Sloan-Kettering Cancer Center operates a pain and symptom-control service for all its cancer patients.

BOB DOUGHTY: An international movement called hospice also has greatly improved pain care for the dying. Hospice care helps people whose doctors confirm that they have only a limited time to live. These patients suffer from a number of sicknesses and conditions.

Hospice care can be given in hospitals, centers for patients and older adults, and patients' homes. Doctors, nurses, social workers and others work with patients and their families to raise the quality of a patient's last days. These medical experts are trained in the safe administration of pain-killing drugs. Their use can prevent or greatly reduce suffering.

STEVE EMBER: Hospice care may have begun in Europe's Middle Ages. In those days, religious workers cared for sick travelers at shelters near holy places.

Centuries later, a British doctor became an activist for better care for the dying in the nineteen forties. With financial aid, Cicely Saunders established Saint Christopher's Hospice in London. She studied pain management efforts in the United States, which she said were better than those of Britain. Her efforts met a longtime need. News of her work traveled.

BOB DOUGHTY: Another physician, Josefina B. Magno, helped the hospice movement grow in the United States. She was able to get the government and insurance companies to help patients with the cost of their care. Doctor Magno established the Hospice of Northern Virginia with friends in nineteen seventy-seven. She later led the National Hospice Organization.

Hospice care is not limited to the dying. Patients still receiving active treatment for diseases like cancer and AIDS can also get hospice help. They can receive palliative care to ease the signs of their sickness. The need is clear in many areas.

STEVE EMBER: An organization called the Foundation for Hospices in Sub-Saharan Africa operates from the city of Alexandria, Virginia. The Foundation says seven thousand people die in parts of Africa every day from conditions resulting from AIDS.

Some hospice centers in the United States and Africa have cooperation agreements. For example, Continuum Hospice Care in New York City has such an agreement with Swaziland Hospice at Home in Matsapha. The Center for Hospice and Palliative Care in South Bend, Indiana has ties to the Palliative Care Association of Uganda in Kampala. These partnerships are among many active relationships between American hospices and African countries.

BOB DOUGHTY: An organization exists to support and increase palliative care across Africa. The African Palliative Care Association was established in the Tanzanian city of Arusha in June, two thousand four.

STEVE EMBER: Sales of some kinds of pain medicine are restricted in the United States. Doctors must first contact a drugstore to order the medicine for their patients. The order is called a prescription.

Doctors usually prescribe opiate drugs only for patients with severe pain. Opiates include codeine, methadone and morphine. Most of these narcotic drugs come from the poppy flower. People have used one opiate, opium, for pain for more than two thousand years. A newer drug, oxycodone, is called an opioid. An opioid is similar to an opiate. Doctors use it to control moderate to severe pain over a long period.

BOB DOUGHTY: Many doctors prescribe narcotic drugs for patients with lasting, severe pain. Such drugs may ease suffering. But they can also be addictive. The user may need increasing amounts to get the same effect.

Strong drugs must be taken carefully. People can accidentally kill themselves by taking too many pills or mixing medicines. Sometimes this happens when a person takes drugs and also drinks too much alcohol.

Most of the drugs were painkillers. The report said methadone was involved in forty percent of the deaths. The drug has been used for many years to treat addiction. It is often given to addicts to reduce symptoms of withdrawal from opioids like heroin.

Strong painkillers, then, can do great good. They ease suffering for millions of patients every year. But some people abuse them, and abusing painkillers can be like riding a wild animal.

BOB DOUGHTY: This SCIENCE IN THE NEWS program was written by Jerilyn Watson. Our producer was Brianna Blake. I'm Bob Doughty.

STEVE EMBER: And I'm STEVE EMBER. Join us again next week for more news about science in Special English on the?Voice of America.