Update Required To play the media you will need to either update your browser to a recent version or update your Flash plugin.
By Paul Thompson
2011-1-15 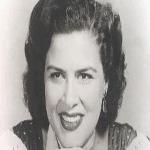 Photo: patsy_cline_com
Patsy Cline was one of America's most loved country music singers.

DOUG JOHNSON: And I'm Doug Johnson with People in America in VOA Special English. Today we tell about a young woman named Virginia Patterson Hensley. No one but her family would remember that name. The world remembers her as Patsy Cline.

SHIRLEY GRIFFITH: That song is called "Walkin' After Midnight." It was Patsy Cline's first big hit record. She recorded it in nineteen fifty-seven. It became number three on the list of country music hit recordings and number twelve on the list of most popular music. 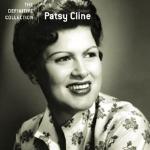 Patsy had worked for many years to make that first successful record. She began singing when she was a young girl in her home town of Winchester, in the southern state of Virginia. Patsy sang anywhere she could. She sang at weddings and dances. She sang at public eating places for eight dollars a night. Those who knew her said she worked hard to improve her singing.

In nineteen fifty-four she won a country music competition near her home. She was twenty-two years old. She was asked to appear on a country music television program in Washington, D.C. She also sang on radio programs in the Virginia area and recorded some records.

DOUG JOHNSON: In nineteen fifty-seven, Patsy Cline appeared on a national television show in New York City. It was on this program that millions of people first heard her sing. She sang "Walkin' After Midnight," a song she had recently recorded. Her appearance on the television program helped make that record a major hit.

Patsy continued to record more songs. Within two years she had another major hit. It was called "I Fall to Pieces." By this time Patsy's voice had already become something special. She had learned to control not only the sound but the feelings expressed in her songs. It was the slow, sad love songs that her fans enjoyed most, songs like "I Fall to Pieces."

SHIRLEY GRIFFITH: Patsy Cline's recording of "I Fall to Pieces" became her first number one country music hit. It was also a hit with fans of popular music. Patsy was a major star. She also had begun performing at the country music theater, the Grand Ole Opry in Nashville, Tennessee.

"Crazy." It was written by an unknown musician who later became a major country music star. His name is Willie Nelson.

If you listen carefully to Patsy Cline's recording of "Crazy," you can hear the beautiful piano playing of another young musician, Floyd Cramer. He also became a major recording star. Listen to Patsy and Floyd perform Willie Nelson's song, "Crazy."

DOUG JOHNSON: On March sixth, nineteen sixty-three, Patsy Cline was killed in the crash of a small airplane. She was only thirty years old. She was flying home to Nashville. She had taken part in a special concert in Kansas City to raise money for the family of a country music radio performer who recently had died.

Patsy Cline's husband and daughter pose with the country music singer's star on the Hollywood Walk of Fame.

Patsy Cline was buried near her home town of Winchester, Virginia. Thousands of people came to her funeral. Ten years after her death, she became the first woman performer elected to the Country Music Hall of Fame.

SHIRLEY GRIFFITH: In nineteen eighty-five, Hollywood producers made a movie about the life of Patsy Cline. It was called "Sweet Dreams. " Popular actress Jessica Lange played Patsy. No one really could sound like Patsy Cline. So the producers used her old records in the movie. Ms. Lange moved her mouth so she appeared to be singing. People who had never heard of Patsy Cline saw the movie and enjoyed her singing. They began buying her records. Today, her records still sell thousands of copies each year as new fans discover her.

We leave you with a song Patsy Cline recorded only a month before she died. It sounds almost as though she was singing in Special English. The song is called "Faded Love."

DOUG JOHNSON: This program was written by Paul Thompson. It was produced by Lawan Davis. I'm Doug Johnson.

SHIRLEY GRIFFITH: And I'm Shirley Griffith. Join us again next week for People in America in VOA Special English.