Update Required To play the media you will need to either update your browser to a recent version or update your Flash plugin.
By Brianna Blake
2011-3-28 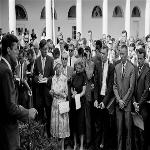 FAITH LAPIDUS: And I'm Faith Lapidus. Americans who volunteer for the Peace Corps get a chance to help improve lives in developing countries. They also get a chance to learn more about the world, and about themselves. This week on our show, we take a look at this program which is celebrating its fiftieth anniversary.

STEVE EMBER: President John Kennedy established the Peace Corps soon after he took office in nineteen sixty-one. It was the time of the Cold War between the United States and the Soviet Union.

The new program gave Americans a chance to answer the call to service that the president made in his inaugural speech. "Ask not what your country can do for you," he said. "Ask what you can do for your country."

Kennedy told Peace Corps volunteers that America's image in the countries where they were going would depend largely on them.

JOHN KENNEDY: "And if you impress them with your commitment to freedom, to the advancement of the interests of people everywhere, to your pride in your country and its best traditions, and what it stands for, the influence may be far-reaching."

FAITH LAPIDUS: On August thirtieth, nineteen sixty-one, the first group of fifty-one Peace Corps volunteers arrived in Accra, Ghana, to serve as teachers. They had agreed to work for almost no pay. They would spend two years in Ghana helping its people and learning the reality of life in a developing country.

Most of the volunteers had just completed college. About half of them taught English or health care.

STEVE EMBER: In the fifty years since then, more than two hundred thousand Americans have served as Peace Corps volunteers. They have worked in one hundred thirty-nine countries.

The Peace Corps is a government agency that was created to promote world peace and friendship. There are three goals: First, to help the people of interested countries in meeting their need for trained men and women. Second, to help promote a better understanding of Americans on the part of the people served. And, third, to help promote a better understanding of other people on the part of Americans.

FAITH LAPIDUS: By nineteen sixty-six, there were almost sixteen thousand volunteers and trainees. This was the height of the Peace Corps' popularity. It was also around the time when many young men were seeking an alternative to military service because of the Vietnam War.

Today, the Peace Corps has more than eight thousand volunteers and trainees in seventy-seven countries. They work in agriculture, economic development, education, the environment and health care. Some work in programs related to youth development.

Today seven percent of volunteers are over the age of fifty. And nineteen percent are members of minority groups.

This year's budget for the agency is four hundred million dollars.

FAITH LAPIDUS: Allegra Troiano is based in Costa Rica as a regional adviser for the Teaching English as a Foreign Language program of the Peace Corps. She says the way Peace Corps volunteers teach English has changed.

In the past, volunteers were placed in a classroom to teach English by themselves. But now, Ms. Troiano says the aim is to work with local teachers to provide what is known as co-teaching.

ALLEGRA TROIANO: "In teaching English as a second language, the goal is to put Peace Corps volunteers in classes with host country national teachers. So they have established that this model of co-teaching is the most sustainable."

She says the Peace Corps is currently expanding programs in countries like Costa Rica to meet growing demand for English teaching.

STEVE EMBER: One former volunteer is Aaron Williams. He is now the director of the Peace Corps.

AARON WILLIAMS: "Everywhere I go, I find the leadership met a Peace Corps volunteer many, many years ago and that had a really positive impact, a transformative experience in their lives -- prime ministers, presidents, cabinet officials, leaders of large companies in the countries where we serve."

Volunteers in one of the newest programs live and work in rural communities in Indonesia. One of the volunteers, Nisha Skariah, recently completed college. Like other volunteers, she says she wants to contribute to a better world.

Nisha Skariah, a recent college graduate from Texas, has come to Indonesia both to teach and to learn

NISHA SKARIAH: "I mean I am still really young and still trying to make my way in the world and trying to figure out exactly what I want to do, and this gives me a little opportunity to focus what I know and what I have done in my life, even with my little experience, and make a big change out of that."

What separates the Peace Corps from other American assistance programs is that the volunteers become part of the community where they work. Teachers like Nisha Skariah live with local families and make the same wages as other teachers.

Volunteers say they gain at least as much from their experience as they give. Ms. Skariah is teaching Indonesians but also learning about the culture of a country with the world's largest Muslim population.

NISHA SKARIAH: "I expected a lot more conservative, maybe a little more, the people and the culture to be a little more restrictive but everyone has been so open and so welcoming and they really embraced me as one of their own. And I am really grateful for that because it makes me feel like I am at home."

FAITH LAPIDUS: John Williams is a former volunteer who is now the Peace Corps director in Thailand. He says the return for the United States on its investment in the Peace Corps is an increased understanding of the world beyond its borders.

Mr. Williams says the personal connections that volunteers make are just as important as the knowledge they bring. This is true, he says, whether they are teaching, working in health centers or assisting farmers.

STEVE EMBER: But the Peace Corps is not without problems. Some volunteers say they have been victims of sexual abuse in countries where they worked. And in March of two thousand nine, a twenty-four-year-old volunteer teaching English, Kate Puzey, was killed in Benin.

The suspect, a citizen of Benin, had been dismissed from a job with the Peace Corps. Ms. Puzey had accused him of sexually abusing girls at a school. The suspect says he is innocent. Ms. Puzey's family recently told ABC News that agency officials had let him know about her part in his dismissal, and later tried to keep the case quiet.

CARRIE HESSLER-RADELET: "Safety and security of our volunteers is absolutely our top priority and we are continually looking at this topic and I have to say that in the last few years we have done an amazing amount of work to try to improve both our systems to support volunteers, to ensure confidentiality and to strengthen their preparedness and training."

At the same time, she says a volunteer must be prepared for risks.

CARRIE HESSLER-RADELET: "Honestly I feel quite confident that actually volunteers have never been as safe in the Peace Corps as they are today. I mean I have no qualms in saying that, because our systems are strong. That said, you know, there is risk to serving as a volunteer, you are in remote areas, the medical care isn't what you would expect here in this country."

FAITH LAPIDUS: Matt Francolino is a new volunteer. He spent last summer living much like he will live in the Peace Corps -- in a rural village in West Africa. He had no electricity, but he says it was the best time of his life.

MATT FRANCOLINO: "And I wondered to myself, how is that possible? I didn't have my cellphone, no computer access, and I realized there were so many more important things that I was looking for in life."

But not every volunteer is able to live and work in another culture, far from home. Some Peace Corps volunteers return to the United States early.

STEVE EMBER: People who served in the Peace Corps often say it was the hardest experience of their lives but also the best experience.

Alex Gordon volunteered in the early nineteen nineties. He has a box full of things that he kept from the two years he spent building a rural school in Paraguay.

ALEX GORDON: "It brings back a whole lot of memories."

Mr. Gordon says volunteering in the Peace Corps is about more than doing good in the world.

ALEX GORDON: "It gives you the confidence that you can really do anything."

And that includes volunteering a second time for the Peace Corps. This time, Alex Gordon will live and work in Liberia.

STEVE EMBER: And I'm Steve Ember. You can find transcripts and MP3s of our programs along with photos and videos at 51voa.com. Also check out the all-new mobile version of our site from your phone or other device. And we hope you can join us again next week for THIS IS AMERICA in VOA Special English.
___