Willa Cather, 1873-1947: She Celebrated Europeans Who Settled in the American Midwest

Update Required To play the media you will need to either update your browser to a recent version or update your Flash plugin.
By Richard Thorman
2008-10-4

And I'm Tony Riggs with People in America. Today we tell about writer Willa Cather.

The second half of the nineteenth century brought major changes to the United States. From its earliest days, America had been an agricultural society. But after the end of the Civil War in eighteen sixty-five, the country became increasingly industrial. And as the population grew, America became less unified.

After railroads linked the Atlantic coast with the Pacific coast, the huge Middle West of the country was open to settlement. The people who came were almost all from Europe. There were Swedes and Norwegians, Poles and Russians, Bohemians and Germans.

Many of them failed in their new home. Some fled back to their old homeland. But those who suffered through the freezing winters and the burning summers and the failed crops became the new pioneers. They were the men and women celebrated by the American writer Willa Cather.

Cather's best stories are about these pioneers. She told what they sought and what they gained. She wrote of their difficult relations with those who followed. And she developed a way of writing, both beautiful and simple, that made her a pioneer, too.

For many women in the nineteenth century, writing novels was just one of the things they did. For Willa Cather, writing was her life.

Willa Cather was born in the southern state of Virginia in eighteen seventy-three. At the age of eight, her family moved to the new state of Nebraska in the Middle West. She and Nebraska grew up together.

Willa lived in the small town of Red Cloud. As a child she showed writing ability. And, she was helped by good teachers, who were uncommon in the new frontier states.

Few women of her time went to a university. Willa Cather, however, went to the University of Nebraska. She wrote for the university literary magazine, among her other activities. She graduated from the university in eighteen ninety-five.

Most American writers of her time looked to the eastern United States as the cultural center of the country. It was a place where exciting things were possible. It was an escape from the flatness of the land and culture of the Middle West.

From eighteen ninety-six to nineteen-oh-one Cather worked for the Pittsburgh Daily Leader newspaper. It was in Pennsylvania, not New York, but it was farther east than Nebraska.

Cather began to publish stories and poems in nineteen hundred. And she became an English teacher in nineteen-oh-one. For five years, she taught English at Pittsburgh Central High School and at nearby Allegheny High School.

She published her first book in nineteen-oh-three. It was a book of poetry. Two years later she published a book of stories called "The Troll Garden."

The owner of a New York magazine, S.S. McLure, read her stories. He asked her to come to New York City and work as an editor at McLure's Magazine. She was finally in the cultural capital of the country. She stayed with the magazine from nineteen-oh-six to nineteen twelve.

One of the people who influenced her to leave the magazine was the American woman writer, Sarah Orne Jewett. Jewett advised Cather to write only fiction and to deal with the places and characters she knew best. Jewett said it was the only way to write anything that would last.

In nineteen twelve Willa Cather published her first novel, "Alexander's Bridge." By that time, Cather had enough faith in herself to leave magazine work and use all her time to write fiction. She remembered Jewett's advice and turned to the land and people she knew best, the farmers of the Middle West.

In Red Cloud she had lived among Bohemians, French-Canadians, Germans, Scandinavians, and other immigrants. She saw that the mixture of all these new Americans produced a new society.

"There was nothing but land," she wrote. "Not a country at all, but the material out of which countries are made." It was this material she used to create her books. 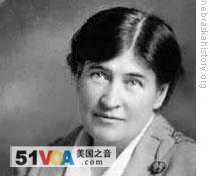 Like all good writers, she wanted her novels to show the world she described, not just tell about it. Later in her life, she described the way she wrote. She called it "novels without furniture." What she meant was that she removed from her novels everything that was not necessary to tell the story. Fiction in the nineteenth century was filled with social detail. It had pages of description and comments by the author. Cather did not write this way. She looked to the past for her ideas, but she drew from the present for her art.

A year after "Alexander's Bridge," Cather published her second novel. It was the first of her books to take place in the Middle West. It is called "O Pioneers." It established her as one of the best writers of her time.

"O Pioneers" tells the story of the first small groups of Bohemians, Czechs, French, Russians, and Swedes who set about to conquer the land. Cather said they acted as if they were a natural force, as strong or stronger than nature. She said they were people who owned the land for a little while because they loved it.

Cather's heroes are pioneers, settlers of unknown or unclaimed land. They also are pioneers of the human spirit.

They are, Cather said, the people who would dream great railroads across the continent. Yet she saw something more in them. It was something permanent within a world of continuous change. A sense of order in what appeared to be disorder.

In Cather's mind, her writings about the Middle West, her prairie years, became a way to show approval of the victory of traditional values against countless difficulties. The fight to remain human and in love with life in spite of everything gives the people in her stories purpose and calm.

Willa Cather continued to write about these new pioneers in "The Song of the Lark" in nineteen fifteen. She followed that with the novel that many consider her best, "My Antonia."

By the nineteen twenties, however, her stories began to change. She saw more defeats, fewer victories. She began to write -- not about great dreams -- but about the smallness of man's vision. She mourned for the loss of values others would never miss.

Willa Cather never married. She began living with another woman from Nebraska in nineteen-oh-eight. They lived together until Cather died.

In nineteen twenty-two, Cather suffered a nervous breakdown. A number of things caused her condition. Her health was not good. She was unhappy with her publisher. And, she was angry about the changes in society brought by new technology.

In nineteen twenty-three, Cather wrote the last of her Nebraska novels, "A Lost Lady." Two years later she produced another novel, "The Professor's House." It was clear by then that she was moving in a different direction. 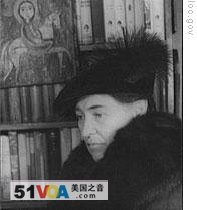 Her next two novels, "Death Comes for the Archbishop," and "Shadows in the Rock," take place in the distant past. They are stories about heroic failure. "Death Comes for the Archbishop" takes place in the American Southwest in the sixteenth century. It describes the experiences of two priests who are sent to what became New Mexico. The action is in the past. But the place is one that Cather felt always would remain the same -- the deserts of the American Southwest.

Although Cather turned away from modern life, she was very much a modern writer. Her writing became increasingly important to a new group of writers -- Ernest Hemingway, F. Scott Fitzgerald, and John Dos Passos.

Near the end of her life she wrote: "Nothing really matters but living. Get all you can out of it. I am an old woman, and I know. Sometimes people disappoint us. And sometimes we disappoint ourselves. But the thing is to go right on living."

Willa Cather went right on living until the age of seventy-four. She died in nineteen forty-seven.

And I'm Shirley Griffith. Join us again next week for another People in America program on the Voice of America.