Jane Jacobs, 1916-2006: Her Activism Helped Shape the Look and Feel of Cities

Update Required To play the media you will need to either update your browser to a recent version or update your Flash plugin.
By Jill Moss
2010-2-13

And I'm Barbara Klein with PEOPLE IN AMERICA in VOA Special English. Today we tell about Jane Jacobs. She was an activist for improving cities.

Jane Jacobs was an activist, writer, moral thinker and economist. She believed cities should be densely populated and full of different kinds of people and activities. She believed in the value of natural growth and big open spaces.

She opposed the kind of city planning that involves big development and urban renewal projects that tear down old communities. She was also a critic of public planning officials who were unwilling to compromise.

Jacobs helped lead fights to save neighborhoods and local communities within cities. She helped stop major highways from being built, first in New York City and later in Toronto, Canada.

Developers and city planners often criticized her ideas. Yet, many urban planning experts agree that her work helped shape modern thinking about cities.

Jane Butzner was born in Scranton, Pennsylvania, in nineteen sixteen. Her father was a doctor. Her mother was a former teacher and nurse. After graduating from high school, Jane took an unpaid position at the Scranton Tribune newspaper. A year later she left Scranton for New York City.

During her first several years in the city she held many kinds of jobs. One job was to write about workers in the city. She said these experiences gave her a better idea about what working in the city was like.

As a young woman, Jacobs had many interests, including economics, law, science and politics. Her higher education was brief, however. She studied for just two years at Columbia University in New York. Jacobs did not complete her college education, but she did become an excellent writer and editor. While working as a writer for the Office of War Information she met a building designer named Robert Jacobs.

In nineteen forty-four, they married. They later had three children. Her husband's work led to her interest in the monthly magazine, Architectural Forum. Jacobs became a top editor for the publication.

Experts have described Jacobs as a writer who wrote well, but not often. She is best known for her book "The Death and Life of Great American Cities." The book was published in nineteen sixty-one. It is still widely read today by both city planning professionals and the general public.

Experts say "The Death and Life of Great American Cities" is the most influential book written about city planning in the twentieth century.

In the book, Jacobs criticized the urban renewal projects of the nineteen fifties. She believed these policies destroyed existing inner-city communities and their economies.

She also thought that modern planning policies separated communities and created unnatural city areas. Jacobs described the nature of cities – their streets and parks, the different cultures represented by citizens and the safety of a well-planned city. Safety was an important issue in big cities that had high rates of crime.

Jacobs wrote that peace on the streets of cities is not kept mainly by the police even though police are necessary. It is kept by a system of controls among the people themselves. She believed the problem of insecurity cannot be solved by spreading people out more thinly.

"The Death and Life of Great American Cities" became a guide for neighborhood organizers and the people who Jacobs called "foot people." These are citizens who perform their everyday jobs on foot. They walk to stores and to work. They walk to eating places, theaters, parks, gardens and sports stadiums. They are not who Jacobs called "car people" – those who drive their cars everywhere.

Jane Jacobs also believed that buildings of different sizes, kinds and condition should exist together. She pointed to several communities as models of excellence. These include Georgetown in Washington, D.C.; the North End in Boston, Massachusetts; Rittenhouse Square in Philadelphia, Pennsylvania, and Telegraph Hill in San Francisco, California.

She also supported mixed-use buildings as a way to increase social interaction. Such buildings have stores and offices on the ground floor. People live on the upper floors. Mixed-use buildings are a lot more common in American cities than in the suburban areas around them.

Jane Jacobs also noted New York City's Greenwich Village as an example of an exciting city community. This is one of the communities that was saved, in part at least, because of her writings and activism. In nineteen sixty-two, Jacobs headed a committee to stop the development of a highway through Lower Manhattan in New York City. The expressway would have cut right through Greenwich Village and the popular SoHo area. 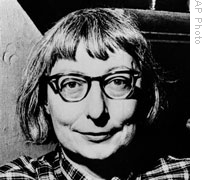 In nineteen sixty-nine, Jacobs moved to the Canadian city of Toronto where she lived for the rest of her life. Part of her reason for leaving the United States was because she opposed the United States involvement in the war in Vietnam. At that time, she had two sons almost old enough to be called for duty. Jacobs continued to be a community activist in Toronto.

She was involved in a campaign to stop the Spadina Expressway through Toronto. This highway would have permitted people living in suburban areas outside Toronto to travel into and out of the city easily.

Jacobs organized citizens against the Spadina Expressway and the politicians who supported it. One of her most important issues was this question: "Are we building cities for people or for cars?"

Today, experts say Toronto is one of only a few major cities in North America to have successfully kept a large number of neighborhoods in its downtown area. Many experts believe this is because of the anti-Spadina movement led by Jane Jacobs.

Jane Jacobs spent her life studying cities. She wrote seven books on urban planning, the economy of cities, and issues of commerce and politics. Her last book, published in two thousand four, was "Dark Age Ahead." In it, Jacobs described several major values that she believed were threatened in the United States and Canada. These included community and family, higher education, science and technology and a government responsive to citizens' needs.

In "Dark Age Ahead," Jacobs argued that Western society could be threatened if changes were not made immediately. She said that people were losing important values that helped families succeed.

In "Dark Age Ahead," Jacobs also criticized how political decision-making is influenced by economics. Governments, she said, have become more interested in wealthy interest groups than the needs of the citizens. Jacobs also warned against a culture that prevents people from preventing the destruction of resources upon which all citizens depend.

Jane Jacobs had her critics.  Many of them argued that her ideas failed to represent the reality of city politics, which land developers and politicians often control. Others argued that Jacobs had little sympathy for people who want a lifestyle different from the one she proposed.

Still, many urban planning experts say her ideas shaped modern thinking about cities. She has had a major influenced on those who design buildings and towns that aim to increase social interaction among citizens.

Jane Jacobs died in two thousand six in Toronto at the age of eighty-nine. Her family released a statement on her death. It said: "What's important is not that she died but that she lived, and that her life's work has greatly influenced the way we think. Please remember her by reading her books and implementing her ideas."

This program was written by Jill Moss. It was produced by Lawan Davis. I'm Steve Ember.

And I'm Barbara Klein. You can read scripts and download audio from our Web site, 51voa.com. Join us again next week for PEOPLE IN AMERICA in VOA Special English.