Update Required To play the media you will need to either update your browser to a recent version or update your Flash plugin.
By Shelley Gollust
2010-3-20 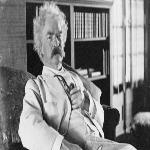 Photo: loc.gov
Mark Twain wrote the "The Adventures of Huckleberry Fin" in 1884.

BOB DOUGHTY: And I’m Bob Doughty with People in America in VOA Special English. Today we tell about one of America’s best-known writers, Mark Twain. We also talk about his famous book, "The Adventures of Huckleberry Finn."

BARBARA KLEIN: Mark Twain wrote "The Adventures of Huckleberry Finn" in eighteen eighty-four. Since then, the book has been published in at least sixty languages. Some people say it is the best book ever created by an American writer. American students still read "The Adventures of Huckleberry Finn."? And parents, teachers and literary experts still debate the issues discussed in the book.

BOB DOUGHTY: The writer who became Mark Twain was born Samuel Langhorne Clemens in eighteen thirty-five. He grew up in Hannibal, Missouri on the Mississippi River. After his father died in eighteen forty-seven, young Samuel went to work as an assistant to a publisher. Ten years later, he became a pilot on a steamboat that sailed on the Mississippi. He heard the riverboat workers call out the words "mark twain!"? That was a measure for the depth of water.

In eighteen sixty-one, the American Civil War put an end to steamboat traffic on the Mississippi. So Clemens traveled west and became a reporter for newspapers in Nevada and California.

BARBARA KLEIN: Later, he wrote funny stories and called himself Mark Twain. Twain became famous for his story, "The Celebrated Jumping Frog of Calaveras County" in eighteen sixty-five. It tells about a jumping competition among frogs.

Twain also traveled a lot and began writing books about his travels. His stories about a trip to Europe and the Middle East were published in "The Innocents Abroad."? And his stories about life in the western United States became the book called "Roughing It."

In eighteen seventy, he married Olivia Langdon and moved to Hartford, Connecticut. During the eighteen eighties, he wrote books for children, such as "The Prince and the Pauper."? It tells about a poor boy who trades identities with a member of England’s ruling family. Twain also wrote "Life on the Mississippi."? This book describes his days as a steamboat pilot and his return to the river twenty years later.

BOB DOUGHTY: Mark Twain was already a successful writer before he became famous as a public speaker. Over the years, he had invested a lot of money in unsuccessful businesses. In eighteen ninety-three, he found himself deeply in debt. So to earn money, he traveled around the world giving humorous talks. His speeches made people laugh and remember events they had experienced.

However, his later life was not a happy one. Two of his daughters died. His wife died in nineteen-oh-four after a long sickness. Some critics think Mark Twain’s later works were more serious because of his sadness. He died of heart failure in nineteen ten.

BARBARA KLEIN: Mark Twain was the first writer to use the speech of common Americans in his books. He showed that simple American English could be as fine an instrument for great writing as more complex language. Through his books, he captured American experiences as no other writer had. 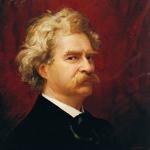 Many of the stories take place in Hannibal, Missouri. The small wooden house where he lived as a boy still stands there. Next to the house is a wooden fence. It is the kind described in Twain’s book, "The Adventures of Tom Sawyer," published in eighteen seventy-six.

In that story, Tom has been told to paint the fence. He does not want to do it. But he acts as if the job is great fun. He tricks other boys into believing this. His trick is so successful that they agree to pay him money to let them finish his work. "The Adventures of Tom Sawyer" is considered one of the best books about an American boy’s life in the eighteen hundreds.

BOB DOUGHTY: Tom Sawyer’s good friend is Huckleberry, or "Huck," Finn. Mark Twain tells this boy’s story in "The Adventures of Huckleberry Finn."? Huck is a poor child, without a mother or home. His father drinks too much alcohol and beats him.

Huck’s situation has freed him from the restrictions of society. He explores in the woods and goes fishing. He stays out all night and does not to go to school. He smokes tobacco.

Huck runs away from home. He meets Jim, a black man who has escaped from slavery. They travel together on a raft made of wood down the Mississippi River. Huck describes the trip:

READER: "It was lovely to live on the raft. Other places seem so cramped up and smothery, but a raft don’t. You feel mighty free and easy and comfortable on a raft... Sometimes we’d have that whole river to ourselves for the longest time... We had the sky up there, all speckled with stars, and we used to lay on our backs and look up at them, and discuss about whether they was made or only just happened. Jim, he allowed they was made, but I allowed they happened; I judged it would have took too long to make so many."

BARBARA KLEIN: Mark Twain started writing "Huckleberry Finn" as a children’s story. But it soon became serious. The story tells about the social evil of slavery, seen through the eyes of an innocent child. Huck’s ideas about people were formed by the white society in which he lived. So, at first, he does not question slavery. Huck knows that important people believe slavery is natural, the law of God. So, he thinks it is his duty to tell Jim’s owners where to find him. Here is part of the story after Huck decides he must do this.

READER: "I felt good and all washed clean of sin for the first time I had ever felt. And I knowed I could pray now. But I didn’t do it straight off, but laid the paper down and set there thinking -- thinking how good it was all this happened so, and how near I come to being lost and going to hell. And went on thinking...

And I see Jim before me all the time; in the day and in the night-time, sometimes moonlight, sometimes storms, and we a-floating along, talking and singing and laughing. But somehow I couldn’t seem to strike no places to harden me against him, but only the other kind."

BOB DOUGHTY: Huck comes to understand that Jim is a good man. He finds he cannot carry out his plan to tell Jim’s owners where to find him. Instead, he decides to help Jim escape. He decides to do this, even if God punishes him.

Huck’s moral search is part of Twain’s humor. Huck’s heart leads him to do the right thing, even when everything he has been taught tells him it is wrong. Huck’s nature is good, but he has no idea of it. Twain tells us more through Huck’s voice than Huck himself knows.

BARBARA KLEIN: It took Mark Twain longer to write "The Adventures of Huckleberry Finn" than any of his other books. He started writing in eighteen seventy-six, but put the story away after about two years of work. He returned to it in eighteen eighty-three. It was published the next year.

From the beginning, the book was hotly debated. Some early critics praised its realism and honesty. But the leading critics of Twain’s time hated it. They objected to the personality of Huck -- a rough, dirty and disobedient boy.

They were insulted by Twain’s attacks on the commonly accepted morals and traditions of white society. And they disliked the way Twain used the language of a common, uneducated person to tell the story. No writer had ever done that before.

BOB DOUGHTY: The debate over "Huckleberry Finn" re-opened in recent years, but for different reasons. The book uses the racist expressions of its time. So some people say reading it is too painful and insulting for black children.

They know that Twain was really attacking racism. But he attacked indirectly, and with humor. So they feel young people will not understand what he was attempting to do. A few American schools have banned the book for young children. A few have banned it for all students. Some schools used a version in which all racist words have been removed.

Other people say young people can understand "Huckleberry Finn" if they study it with a good teacher. They say the book remains one of the best denunciations of racism ever written.

BARBARA KLEIN: And I’m Barbara Klein. Join us again next week for People in America in VOA Special English.