Update Required To play the media you will need to either update your browser to a recent version or update your Flash plugin.
By Nancy Steinbach
2010-4-3 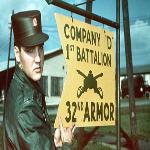 Photo: AP
Elvis Presley was drafted into the army in 1958.

FAITH LAPIDUS: Welcome to PEOPLE IN AMERICA, a program in VOA Special English. Today Rich Kleinfeldt and Steve Ember tell about one of America's most popular singers, Elvis Presley.

RICH KLEINFELDT: That song, "Hound Dog," was one of Elvis Presley's most popular records. It sold five million copies in nineteen fifty-six. Music industry experts say more than one thousand million of Elvis's recordings have sold throughout the world. He was a success in many different kinds of music -- popular, country, religious, and rhythm and blues.

Elvis Presley won many awards from nations all over the world. Yet, he did not record in any language other than English. He never performed outside the United States, except for three shows in Canada. Yet, his recordings and films have been, and are still, enjoyed by people all over the world.

STEVE EMBER: Elvis Aaron Presley was born in the southern town of Tupelo, Mississippi on January eighth, nineteen thirty-five. His family was extremely poor. During his childhood, he sang in church with his parents. He also listened to music that influenced his later singing, including country, rhythm and blues, and religious music. Elvis and his family moved to Memphis, Tennessee when he was thirteen.

After high school, he had several jobs, including driving a truck. In nineteen fifty-three, he made his first recording of this song, "My Happiness":

RICH KLEINFELDT: Elvis Presley recorded the song at the Memphis Recording Service. The story is that he paid four dollars to make a recording for his mother. A woman who worked at the public recording studio had another job with a local independent record company called Sun Records. She made a second recording of Elvis's songs because she thought the owner of Sun Records should hear him sing.

STEVE EMBER: The owner of Sun Records, Sam Phillips, had been looking for a white performer who could sing black rhythm and blues. He suggested Elvis work with a guitar player and a bass player. Several months later Mister Phillips agreed to have the group make a record. It was released on July nineteenth, nineteen fifty-four. One of the songs was "That's All Right":

The record sold well in Memphis, and was played a lot on local radio stations. To let others hear Elvis, Sam Phillips organized a series of performances at country fairs in the area. One of the people who heard Elvis perform at these shows was Colonel Tom Parker. Elvis signed an agreement that Colonel Parker would organize his appearances.

One of Elvis' first new recordings became a huge hit, and led to his many appearances on television. It was "Heartbreak Hotel":

RICH KLEINFELDT: By the middle of the nineteen fifties, Elvis Presley was known around the world as the young man who moved his hips in a sexual way as he sang rock and roll music. Many adults said he and his music were bad influences on young people. Young women loved him. Huge crowds attended his performances.

He made his first movie in nineteen fifty-six. It was "Love Me Tender." The title song was a big hit.

STEVE EMBER: Elvis Presley was one of the highest paid actors in Hollywood for a number of years in the nineteen fifties. He acted in thirty-one movies.

In nineteen fifty-eight, just as he finished making the movie "King Creole," Elvis received notice that he had to serve in the United States Army. He was stationed in Germany where he lived in a large house and dated a lot of beautiful women. One young girl he met in Germany was Priscilla Beaulieu, the daughter of an Army officer. She was fourteen years old. Later, after Elvis had finished his army service, she came to live with him in Memphis. They married in nineteen sixty-seven, when she was twenty-one years old. He was thirty-two. They became parents nine months later of a baby girl, Lisa Marie.

RICH KLEINFELDT: Colonel Parker made sure that songs Elvis had recorded earlier were released during the years he was in the army. So Elvis was just as popular after his military service as he was before it.

Elvis Presley won three of the music industry's highest award, the Grammy. He received the first one in nineteen sixty-seven. It was for "How Great Thou Art," an album of religious music.

STEVE EMBER: Elvis returned to performing live shows in nineteen sixty-nine, in Las Vegas, Nevada. He then traveled around the country performing before huge crowds. He began to take drugs to help him sleep. He gained a lot of weight so he took drugs to help control his weight. And he took extremely strong drugs to reduce pain.

Elvis also suffered from the emotional sickness, depression. It became worse after his marriage ended. Elvis never permitted Priscilla to stay with him in Las Vegas or travel with him around the country. He also did not want Priscilla to see other people when he was away from home. And he spent time with other women. Priscilla finally left him in nineteen seventy-two for another man.

RICH KLEINFELDT: Elvis Presley released many recordings of his performances during the nineteen seventies. He also enjoyed great success on television. His nineteen seventy-three television show from Hawaii was seen in forty countries by more than one thousand million people.

His last record album was called "Moody Blue." He recorded it in nineteen seventy-six. One of its hit songs was called "Way Down":

STEVE EMBER: Elvis Presley died on August sixteenth, nineteen seventy-seven. First reports said he had a heart attack, but later tests showed many drugs in his body. Experts agree that these drugs probably caused his death.

Hundreds of thousands of people still visit his home, Graceland, in Memphis every year. Fans continue to buy his music, making him the most popular recording artist ever. Elvis Presley remains the undisputed King of Rock and Roll.

FAITH LAPIDUS: This program was written by Nancy Steinbach. Rich Kleinfeldt and Steve Ember were the narrators. The producer was Paul Thompson. I'm Faith Lapidus. Listen again next week for another PEOPLE IN AMERICA program in VOA Special English.