Update Required To play the media you will need to either update your browser to a recent version or update your Flash plugin.
By Vivian Bournazian
2011-12-17 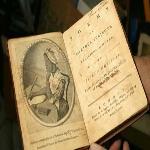 RAY FREEMAN: And I'm Ray Freeman with the VOA Special English program PEOPLE IN AMERICA. Every week we tell about someone important in the history of the United States.

This week we tell about Phillis Wheatley, the first black female poet in the United States.

SHIRLEY GRIFFITH: The girl who became known as Phillis Wheatley was born about seventeen fifty-three in Senegal, Africa. She was kidnapped and brought to the New England colonies in North America on a ship that carried slaves. The ship's name was Phillis.

The girl was between seven and eight years old. She was weak and sickly. So her price was not very high. She was sold in a slave market in the city of Boston, Massachusetts, in August seventeen sixty-one. John Wheatley, an international businessman, bought her to serve his wife, Susannah.

RAY FREEMAN: Phillis came from a culture that was very different from that of the Wheatleys. She found the food, customs and beliefs to be new and strange. The other slaves in the house taught her many things about America.

Phillis quickly learned the rules of slavery. She learned that slaves could not beat drums because slave owners feared that secret messages were being passed to slaves on other farms. She learned that in Southern states it was a crime to teach a slave to read and write.

SHIRLEY GRIFFITH: In Northern states in the seventeen hundreds, black slaves were treated better than they were in the Southern states. Restrictions against the education of slaves were not as severe as they were in the South. Many of the slaves in New England were even urged to learn to read, especially the Bible, the major book of the Christian religion. Many people thought that slaves should read the Bible so they could become better believers ofthe Christian religion. 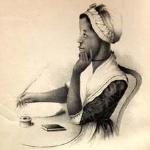 Phillis Wheatley had fewer restrictions than most slaves

In New England, blacks were free to meet with each other in groups. Many times male slaves were accepted as members of the community for special projects. These included gatherings to clean corn or to build a farm house. Female slaves cooked for the groups.

RAY FREEMAN: From her earliest days as a slave, Phillis was a happy, busy person. She liked to keep busy. She especially liked to do things with her hands. She quickly learned how to clean around the Wheatley house and how to do the dishes. But her mind seemed to move even faster than her hands. She wanted to do everything.

Phillis's new family had unusual beliefs for the times. John Wheatley and his wife were educated people. Susannah Wheatley believed that all human beings, including African slaves, could learn if given the chance. She believed that all people, of any skin color, should love and respect each other. She treated Phillis more as a daughter than as a slave. Mr. Wheatley said, "You're my black child. You're my Phillis."

Susannah Wheatley soon recognized Phillis's intelligence and desire to learn. Mr. Wheatley observed how Phillis loved books and the care she took with them. At times, Phillis would smell the pages of the books and hold them close to her.

SHIRLEY GRIFFITH: One day, one of the slaves in the Wheatley home found Phillis writing on the wall of Mr. Wheatley's room with a piece of coal. Phillis had been cleaning the dust from a book. She decided to copy the letters from the cover of the book. The slave brought Mr. Wheatley to inspect the marks on the wall. But Susannah Wheatley did not get angry. Instead, she smiled.

Mr. Wheatley gave Phillis a pencil and paper and a little table on which to write. She showed the writing on the wall to her daughter Mary. Mary was as surprised as her mother at how well Phillis had copied the letters. Mary told Phillis she would teach her to write -- on paper, not on walls.

RAY FREEMAN: Mary Wheatley began to teach Phillis to read and write English. She also taught Phillis the Christian religion. Phillis learned quickly. She learned the English alphabet in a few weeks. In a year and one-half after she arrived in America, Phillis could read English. And she could read and understand difficult parts of the Bible.

Phillis loved to learn new words. She enjoyed the new feelings that went with the sounds. She especially liked writing and creating new ways of saying things.

SHIRLEY GRIFFITH: Mary taught Phillis about writings from other countries. America was a young nation. It had not yet produced writers and poets like older nations.

So Phillis studied the writings of European writers. She read the work of the Greek poet Homer, the English poets Keats and Pope, and the plays and poetry of Shakespeare. She read and re-read the Bible.

Phillis was about twelve years old when she began to write poetry. One of her earliest poems was about her religious faith. It questioned how a person could not believe in God:

"Thou who dost daily feel his hand, and rod

Darest thou deny the essence of a God!

RAY FREEMAN: Phillis Wheatley's first major work was "An Elegiac Poem on the Death of the Celebrated Divine." It was published in seventeen seventy. Phillis wrote the long poem to honor a famous clergyman who had died.

Her Memoirs and Poems was published in 1834

Phillis wrote mostly about religion and morals. Many of her poems were created at the request of someone to honor a family member who had died. Her poems are representative of the times. They expressed common reactions to personal events such as deaths or marriages. Or they honored public events such as battles.

SHIRLEY GRIFFITH: Phillis had an unusual life for a slave. Mr. Wheatley had stopped having Phillis do house cleaning jobs. She made sure Phillis had time to study and to visit the family friends. But Phillis was not permitted to make friends with other uneducated slaves. So she remained separate from both white and black worlds. While she was considered above the other black slaves, she was never considered an equal of white slave owners.

One time she was invited to dinner in the home of one of Mr. Wheatley's relations. The servants said that it was the first time they ever carried food to a woman with skin their color. But Phillis usually sat at a table separate from the white people at a dinner party.

RAY FREEMAN: Phillis Wheatley became famous in Europe as well as in America. She travelled to London in seventeen seventy-three and gave poetry readings there. She was twenty years old. The writings of the young slave from Africa surprised everyone.

During her visit in London, she was to have been presented to King George the third. But she received urgent news from America. Mr. Wheatley was very sick and had asked that Phillis return to Boston. Phillis returned home quickly.

That meant she missed the publication in London of her book poems on various subjects, religious and moral. It contained thirty-eight of her poems. It was the first published book written by a black person in America. And it was only the second book written by an American woman.

Newspapers in London highly praised her poems. Her book sold very well there and later in America.

SHIRLEY GRIFFITH: Phillis Wheatley had one more brief period of being famous. In seventeen seventy-five, she wrote a poem about George Washington. He had become commander of the Colonial forces in the American revolution. The poem was called "His Excellency General Washington." It called Washington "first in peace and honors." She sent her poem to him.

Some time later, she was invited to visit George Washington in his headquarters. It was an unusual visit between a black woman poet and a military commander.

RAY FREEMAN: Phillis took care of Susannah during her long final sickness. When Mr. Wheatley died in March seventeen seventy-four, Phillis wrote that she had lost a friend and parent.

After Susannah's death, Phillis was freed by the Wheatley family. But her life became more difficult.

She married John Peters, a free black man. He failed in many business attempts. Their three children died at a very young age.

Phillis tried to publish another book of her poems. But now that she was free, she had lost her appeal as a slave poet. Phillis Wheatley died poor and alone in seventeen eighty-four. She was thirty-one years old.

RAY FREEMAN: This Special English program was written by Vivian Bournazian. It was produced by Lawan Davis. I'm Ray Freeman.

SHIRLEY GRIFFITH: And I'm Shirley Griffith. Join us again next week for another PEOPLE IN AMERICA program on the Voice of America.