Playing in the Sun and Sea at Martha's Vineyard and Nantucket

Update Required To play the media you will need to either update your browser to a recent version or update your Flash plugin.
By Jerilyn Watson
2011-7-24 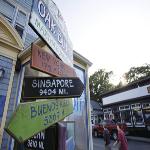 BARBARA KLEIN: Welcome to THIS IS AMERICA in VOA Special English. I'm Barbara Klein. This week on our program, we tell you about two islands in Massachusetts, in the New England area of the northeastern United States. Martha's Vineyard and Nantucket are popular places to visit, especially in the warmer months.

Both are known for their sailing and sunsets and fun things to do. Martha's Vineyard is also known for its tall cliffs overlooking the Atlantic Ocean. The island is about thirteen kilometers off the coast and is less than two hundred sixty square kilometers.

Homes designed like those of earlier times line the streets of Edgartown, Oak Bluffs and Vineyard Haven. These are the major towns on Martha's Vineyard. 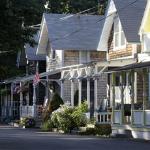 Houses in the Cottage Park neighborhood of Oak Bluffs, on the island of Martha's Vineyard, Massachusetts

For most of the year, the population of Martha's Vineyard is about fifteen thousand. During the summer, more than one hundred thousand people crowd the island. And we do mean crowd. Look around and you might see some Hollywood stars and other faces of the rich and famous.

Some people arrive by boat, including a ship that carries passengers and cars. Others come by plane. Many visitors return year after year.

Now, we continue our story with Shirley Griffith and Rich Kleinfeldt as your travel guides.

RICH KLEINFELDT: The towns and the quieter country areas of Martha's Vineyard all offer places to stay. Small hotels and homes for visitors on the island may not cost much. Other hotels cost hundreds of dollars per night. Some people save money by preparing their own food. Others eat in the many restaurants on the island.

Hungry visitors like the seafood at several famous eating places like the Black Dog Tavern in Vineyard Haven. And they can stop into small stores that sell sweets like ice cream and fudge candy.

During warm weather the Vineyard is a good place for many different activities. People can play golf or catch fish. They can ride in sailboats or motor boats. They can water ski and swim. They can take quiet walks along sandy beaches and among the thick green trees. They can take pictures of birds found around small areas of fresh water or on the old stone walls surrounding many farms.

SHIRLEY GRIFFITH: Many families with children spend their summer holidays in Martha's Vineyard. One of the popular places for families is the Flying Horses Carousel in Oak Bluffs. It is the oldest continually operated merry-go-round ride in the United States. The colorful wood horses that turn in a circle were created in eighteen seventy-six.

One of the best places for children and adults to swim is the Joseph A. Sylvia state beach. The water there is warmer and calmer than at some of the other Vineyard beaches.

Families also enjoy the Felix Neck Wildlife Sanctuary where they can observe much of the island wildlife. People can walk through more than nine kilometers of fields, trees and wetlands to learn about the plants and animals on the island.

Almost twenty percent of the land on Martha's Vineyard is protected from development. There are other wildlife areas to explore. A flat-topped boat called the On-Time Ferry takes people and cars to a nearby small island, Chappaquiddick.

Chappaquiddick has a white sand beach at the Cape Poge Wildlife Preserve. Many small birds make their homes in the grass on the edge of the sand.

RICH KLEINFELDT: Back on Martha's Vineyard, visitors often take long walks at the foot of the colorful high edges of rock that line the water at Gay Head Cliffs. The white, yellow, red and brown colors of the cliffs deepen as the sun disappears.

People also sit on the beach and on rocks in the fishing village of Menemsha to watch the sunsets. As the sun goes down in the sky it paints yellow, red, and other colors on the clouds. Some people offer a kind of ceremony as they watch the sun disappear into the seas.

Fishing boats rise and fall with the waves. Bells sound to help guide the boats to land as darkness covers the water.

SHIRLEY GRIFFITH: Many people who live all year on the island make their money from the sea. Some of the fishermen and farmers on the island today are related to the Europeans who settled the land centuries ago.

Historians say British mapmaker Bartholomew Gosnold first made a map of the island for the rulers of England in sixteen-oh-two. Gosnold is said to have named the island to honor his baby daughter, Martha.

The Vineyard part of the name came from the many wild grape vines Gosnold found on the island. Later, King Charles of England gave the island to businessman Thomas Mayhew of the Massachusetts Bay Colony.

The son of Thomas Mayhew established the first European settlement on the island in sixteen forty-two at Edgartown. The Wampanoag Indians taught the settlers to kill whales.

Men in Edgartown and Vineyard Haven earned their money by killing whales until the middle of the nineteenth century. Then, after the Civil War, visitors began to provide most of the islanders' money.

In eighteen thirty-five, the Methodist Church held a group camp meeting in what was to become the town of Oak Bluffs. Some of the campers stayed on and built small homes.

By the middle of the nineteenth century, ships from the American mainland began bringing visitors to the island. Big hotels were built in the town near the edge of the water. Martha's Vineyard was on its way to becoming the visitors' center that it is today.

RICH KLEINFELDT: Many summer visitors also travel to Nantucket, another island in the Atlantic near Massachusetts. They like this island for its beaches, its open land and its trees.

Nantucket is smaller than Martha's Vineyard. It is about fifty kilometers from the Massachusetts coast. Its distance from the mainland causes some Nantucket citizens to say they are true islanders. The only town on Nantucket Island also is called Nantucket.

Artists often paint its waterfront and the small stores along it. But many visitors say the most interesting part of the town is the area of homes. The island is known for its small gray houses with roses growing on them. Signs on some of the houses say they were built as long ago as the seventeenth century.

The public may enter fourteen historic homes now open as museums. Another museum, the Museum of Nantucket History, helps newly arrived mainlanders learn about the land and history of the island.

SHIRLEY GRIFFITH: Humans are not the only visitors to Nantucket. More than three-hundred-fifty kinds of birds visit the island each summer. So people who like to watch birds return year after year.

Nature in general appeals to Nantucket visitors. Many plants and flowers grow wild in open areas of the island. Farmers also grow several kinds of berry fruits. Cranberries are a leading crop. Some people visit Nantucket in the autumn to watch the harvests of the red berries. 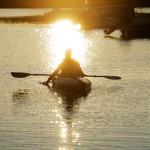 Kayakers on Nashaquitsa Pond, in Nashaquitsa, on the island of Martha's Vineyard, Massachusetts

People who visit Nantucket enjoy water sports, walking and bicycle riding. They also catch fish for pleasure. Some Nantucket citizens earn money by fishing. Earning their living from the sea comes naturally to people who live on the island.

At one time, hunting for whales was the main job of people on Nantucket, just as it was on Martha's Vineyard.

RICH KLEINFELDT: England gave Nantucket to Thomas Macy in sixteen fifty-nine. Macy made an agreement with the Wampanoag Indians who lived there. Then he sold most of the land to shareholders. Settlers farmed the land. But farming on Nantucket did not succeed very well because the ground was so full of sand.

In sixteen ninety an expert from the mainland taught sailors to catch small whales from boats very close to the land. Years later, strong winds forced a whaling boat further into the ocean. Sailors on that boat caught a sperm whale. That whale provided highly sought oil. Soon the Nantucket sailors were catching many sperm whales.

That accidental event made Nantucket a whaling center. However, whales in the seas near Nantucket died out over time. Nineteenth century sailors from the island had to travel for years to catch whales.

Luckily, visitors had begun to provide earnings for Nantucket by the eighteen seventies. But it was not until the nineteen sixties that providing for visitors became the major industry on Nantucket.

SHIRLEY GRIFFITH: Visitors today to both Nantucket and Martha's Vineyard enjoy almost everything about the islands -- except other visitors. The crowds during the warm season can mean heavy traffic and long lines for services.

Yet, most visitors to Martha's Vineyard and Nantucket really enjoy their holidays there. They often say they feel they are escaping from the problems of daily life. And they leave with peaceful memories of watching the red sun disappear into the dark ocean waters around the islands.

BARBARA KLEIN: Our program was written by Jerilyn Watson and read by Shirley Griffith and Rich Kleinfeldt. Transcripts and audio files of our programs are all available online at 51voa.com. I'm Barbara Klein. We hope you can join us again next week for THIS IS AMERICA in VOA Special English.