Update Required To play the media you will need to either update your browser to a recent version or update your Flash plugin.
By Shelley Gollust
2012-1-21 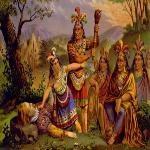 SHIRLEY GRIFFETH: PEOPLE IN AMERICA, a program in Special English on the Voice of America.

She lived four hundred years ago in what became the American state of Virginia. She was the first Native American to marry a white person. I'm Shirley Griffith.

RAY FREEMAN: And I'm Ray Freeman. Today, we tell about Pocahontas, the daughter of the chief of the Powhatan Indian tribe.

SHIRLEY GRIFFETH: Pocahontas was born in fifteen ninety-five. She was one of twenty children of Chief Powhatan. Powhatan ruled a group of more than twenty Indian tribes in territory that is now the eastern state of Virginia.

In sixteen-oh-seven, the Virginia company in England sent colonists to settle the land that later became the United States of America. The leader of the English settlers was John Ratcliffe. He claimed the land for King James of England. He named the new colony Jamestown, Virginia. The English colonists did not know that the area already was settled by Indians.

RAY FREEMAN: The Powhatan Indians lived in the area where the English colonists landed. They were part of a large group of American tribes who spoke the Algonquian language. The Powhatans had lived in the area for almost one thousand years. They built villages. They grew beans, corn, squash and melons. They created a strong political system, led by powerful chiefs like Powhatan. His power and wealth were evident.

Women of the tribes controlled the houses and the fields. They made clothing of animal skins and containers of clay. Men hunted and fished for food. Both men and women wore earrings and other objects made of shells, pearls and copper.

The young Pocahontas often visited Jamestown during the colony's first months. She was about twelve years old. The colonists knew her well. She became an important link between the colonists and her father, Powhatan.

SHIRLEY GRIFFETH: The Indians' culture was very different from that of the English settlers. The two groups did not understand each other. The misunderstandings led to hostile incidents between the colonists and the Indians.

John Smith was an explorer, soldier and a leader of the Jamestown colony. He was captured in sixteen-oh-seven by followers of Powhatan. Captain Smith wrote about this incident in a book that was published in sixteen twenty-four. He wrote that Pocahontas saved him from being executed by Powhatan. This story has been repeated for hundreds of years. This is what most people know about Pocahontas.

RAY FREEMAN: Most historians, however, do not believe that Pocahontas saved the life of John Smith. Some believe that Captain Smith invented the story after reading about a similar event that took place in Florida. That event involved a captured Spanish explorer, an Indian chief and the chief's daughter.

Some historians do not believe that John Smith's life was in danger. They say that what Captain Smith thought was to be his execution was really an Indian ceremony. The ceremony was meant to show that Powhatan accepted Smith as part of his tribe. Historians say the Indian chief wanted to make the English colonists his allies.

John Smith had been wounded during his capture. He returned to England. Hostilities once again broke out between the Indians and the English settlers. In sixteen eleven, Thomas Dale became acting governor of the colony. He started a new aggressive policy toward the Indians. Two years later, an English soldier, Samuel Argall, kidnapped Pocahontas. She was about eighteen years old. The colonists kidnapped her because they wanted to prevent more attacks by the Indians. They also wanted to force chief Powhatan to negotiate a peace agreement. 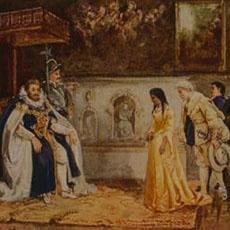 RAY FREEMAN: Pocahontas lived as a hostage in the Jamestown settlement for more than a year. A colonist, John Rolfe, taught her English. He also taught her the Christian religion. Pocahontas was the first Native American to become Christian. She changed her name to Rebecca.

In sixteen fourteen, she married John Rolfe in the church in Jamestown. She was the first Indian woman to marry a white man. Her husband believed that their marriage would be good for the colony. John Rolfe said he married Pocahontas "for the honor of our country, for the glory of God. "

SHIRLEY GRIFFETH: Governor Dale immediately opened negotiations with Powhatan. The result was a period of peace that lasted for about eight years.

RAY FREEMAN: In sixteen fifteen, Pocahontas and John Rolfe had a son. They named him Thomas. The next year Pocahontas and her family sailed to England for a visit. In London, she was treated like a famous person. She was officially presented to king James the First. She also met John Smith again.

The Virginia Company said her visit proved that it was possible to have good relations between the English colonists and the Indians. The company urged more people to move from England to the Virginia colony.

Pocahontas had her picture painted while visiting England. She is wearing the clothes she wore when she met the King. They are the kind of clothes that were popular in England in the sixteen hundreds. This picture is the only one that really is of her.

SHIRLEY GRIFFETH: Pocahontas and her family stayed in England for seven months. They prepared to return to Jamestown. But Pocahontas became sick with smallpox. She died from the disease. She was buried in Gravesend, England. She was twenty-two years old.

RAY FREEMAN: Pocahontas left no writings of her own. The only reports about her from the time were written by John Smith. His reports may not all have been true. Yet the story of her rescue of Captain Smith became a popular folk story. 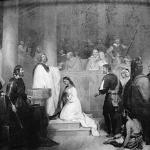 Americans know that Pocahontas played a part in the early history of Virginia. They remember her bravery and friendship. Americans also remember her for what she represented as a Native American: the hope of close relations between the white people and the Indians.

SHIRLEY GRIFFETH: Pocahontas is honored in the United States Capitol building in Washington, D. C. There are three art works of her in the large, round, main hall of the capitol. There are more representations of her than any other American except for the nation's first president, George Washington. The three art works show the popular stories about Pocahontas. One is a painting of Pocahontas taking part in a religious ceremony in which she became a Christian. Two others show her saving the life of Captain John Smith.

RAY FREEMAN: Many different American groups have used the name and some version of a picture of Pocahontas. Whale hunters in the nineteenth century named ships after Pocahontas in honor of her bravery. They also put small statues of her on their ships.

Many American writers have written about Pocahontas. The Walt Disney company produced a popular children's movie about her.

SHIRLEY GRIFFETH: Today, visitors to the Jamestown settlement in Virginia can see what life was like there in the sixteen hundreds.

They can see copies of the ships that brought the English settlers. And they can see statues of three of the people important in early America: John Smith, Chief Powhatan, and his daughter -- Pocahontas.

RAY FREEMAN: This Special English program was written by Shelley Gollust. It was produced by Lawan Davis. I'm Ray Freeman.

SHIRLEY GRIFFETH: And I'm Shirley Griffith. Listen again next week for another PEOPLE IN AMERICA program on the Voice of America.