Update Required To play the media you will need to either update your browser to a recent version or update your Flash plugin.
By VOA
2011-12-28

Photo: AP
Jimmy Carter smiles at the crowd during the Democratic National Convention in New York on July 15, 1976

This week in our series, we look back at the presidential election of nineteen seventy-six.

When Vice President Gerald Ford became president in nineteen seventy-four, he took office during a crisis. For the first time in American history, a president -- Richard Nixon -- had resigned.

Nixon resigned as a result of the case known as Watergate. It involved the cover-up of illegal activities related to his re-election campaign. Lies about Watergate only added to the mistrust of Americans angry at having been misled about the war in Vietnam. After Vietnam and Watergate, many people no longer believed their public officials.

Voters rejected Gerald Ford, a Republican, in the presidential election of nineteen seventy-six. Instead they chose Jimmy Carter, the candidate of the Democrats. Why?

One reason was that Ford had pardoned Nixon. He declared a pardon for any crimes that Nixon might have committed. This made many people angry. Also, he refused requests for federal aid for New York and other cities. Voters may have felt that he was not concerned about the problems of poor people.

Others believe that unemployment and inflation defeated Gerald Ford. He was not able to deal effectively with these problems during his short presidency.

There was competition for the Republican Party nomination in nineteen seventy-six. Ford's chief opponent was Ronald Reagan, who had just served two terms as governor of California.

Democrats thought that voter anger about Watergate would help their party win the White House. Eleven Democrats campaigned for the nomination. Two well-known politicians did not campaign, but they said they would serve if no other candidate won the party's support. They were former vice president Hubert Humphrey and Senator Ted Kennedy.

One of the lesser-known candidates was the former governor of Georgia, Jimmy Carter.

JIMMY CARTER: "My name is Jimmy Carter, and I'm running for president."

Political experts gave him little chance of winning the nomination. Most Democrats did not even know who he was.

Before becoming governor, he had been a nuclear power engineer in the Navy and a peanut farmer in Georgia. Again and again, he told people that he was not part of the political establishment in Washington. He also had strong Christian beliefs. This appealed to a lot of voters.

Many voters supported Carter in the primary elections leading up to the party's nominating convention. His victory in the Florida primary was especially important. He defeated another politician from the South, Governor George Wallace of Alabama.

Jimmy Carter represented what was called the "New South." He made it clear that he opposed the ideas of the "Old South," like discrimination against blacks.

George Wallace spoke of creating a better life for both blacks and whites. Yet he had strongly defended racial separation for most of his political life. Many people remembered pictures of Governor Wallace at the University of Alabama in nineteen sixty-three. The pictures showed him blocking the door to prevent two young blacks from attending the school.

The Republican primaries had mixed results for President Ford.

PRESIDENT GERALD FORD: "Right now, I predict that the American people are going to say that night, ‘Gerry, you've done a good job – Keep right on doing it.'"

For example, in New Hampshire he won only fifty-one percent of the vote. Ronald Reagan won forty-nine percent. But in Massachusetts, Ford won twice as many votes as Reagan did.

The campaign showed that Reagan was more conservative than Ford. For example, Reagan talked strongly about United States control of the Panama Canal. In his words: "We built it, we paid for it, it's ours, and we are going to keep it." President Carter would later decide differently.

Ford, in his campaign speeches, denounced extremism. It was clear that he was talking about his opponent, Ronald Reagan.

Ford and Reagan won almost the same amount of support in the Republican primaries. Yet many delegates at the nominating convention remained undecided. This was a dangerous situation for the Republican Party. Party leaders did not want a fight over undecided votes at the convention. They worried that a lack of unity could damage the party's chances in the general election.

The situation was similar for the Democrats. Support for Jimmy Carter increased. But some Democrats who did not like him began to say, "Anybody but Carter."

Carter's campaign message was that he did not have ties to special interest groups, that he would be different.

"I see an America on the move again, united, its wounds healed, an America entering its third century with confidence and competence and compassion. An America that lives up to the majesty of its Constitution, and the simple decency of its people. This is my vision of America. I hope you share it. And I hope you will help me fight for it."

Many people liked what they heard. Carter won the Democratic primaries in Georgia, Alabama and Indiana. The other candidates fell hopelessly behind.

At the party convention, he was nominated on the first vote. In his acceptance speech, he repeated the line that he continually used with voters.

JIMMY CARTER: "My name is Jimmy Carter, and I'm running for president."

Carter said there was a fear that America's best years were over. He said the nation's best was still to come.

CARTER: "Nineteen seventy-six will not be a year of politics as usual. It can be a year of inspiration and hope, and it will be a year of concern, of quiet and sober reassessment of our nation's character and purpose, a year when voters have confounded the experts. And I guarantee you that it will be the year when we give the government of this country back to the people of this country." [Cheering] 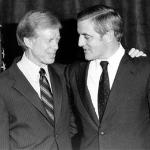 A month before the Republican Party convention, Ronald Reagan made a costly political mistake. He said that, if he won the nomination, he would want Senator Richard Schweiker of Pennsylvania as his running mate. Conservatives got angry. Schweiker was a liberal Republican. Some political observers say this is why Reagan lost the nomination to President Ford.

Many of the delegates wanted Reagan to then be Ford's running mate. But Reagan was not interested in becoming vice president. Instead, the nominee was Senator Robert Dole of Kansas.

Nonetheless, Reagan received a long and enthusiastic response from the convention delegates when Gerald Ford motioned for him to come down and join him at the podium.

RONALD REAGAN: "If I could just take a moment, I had an assignment the other day. Someone asked me to write a letter for a time capsule that is going to opened in Los Angeles a hundred years from now.

"We live in a world in which the great powers have poised and aimed at each other horrible missiles of destruction, nuclear weapons that can in a matter of minutes arrive at each other's country and destroy virtually the civilized world we live in.

"And suddenly it dawned on me; those who would read this letter a hundred years from now will know whether those missiles were fired. They will know whether we met our challenge. Whether they have the freedoms that we have known up until now will depend on what we do here. Mister President..." [Cheering]

It was a preview of the strong and confident speaking style that would serve Reagan well four years later. Indeed, as the future president, Ronald Reagan would be known as "the Great Communicator."

The general election campaign started in September nineteen seventy-six. One newspaper said the campaign left voters feeling sleepy because it was not very interesting.

Ford and Carter agreed to debate each other on television. Nobody had done that since nineteen sixty, when Richard Nixon and John Kennedy had several televised debates.

Many people thought Ford did a little better than Carter in the first debate. In the second debate, however, President Ford made a mistake. He wrongly suggested that the Soviet Union did not control Eastern Europe.

The third debate did not have a clear winner. Opinion polls showed that many voters were still undecided. 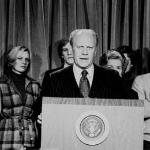 A lot had changed in the two years since Jimmy Carter began to receive national attention. Most Americans had never heard of him before. Now, many of those same people had just elected him the thirty-ninth president of the United States.

A look at the Carter presidency, next week.

You can find our series online with transcripts, MP3s, podcasts and pictures at 51voa.com. You can also follow us on Facebook and Twitter at VOA Learning English. I'm Steve Ember, inviting you to join us again next week for THE MAKING OF A NATION -- American history in VOA Special English.