Update Required To play the media you will need to either update your browser to a recent version or update your Flash plugin.
By Brianna Blake
2010-5-14 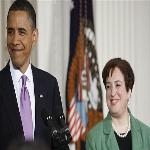 BARACK OBAMA:"I have selected a nominee who I think embodies that same excellence, independence, integrity and passion for the law."

If confirmed by the Senate, the fifty-year-old Kagan would be the youngest justice on the current Supreme Court. She would be the fourth woman to ever serve on the Court.

President Obama described Elena Kagan as "a trailblazer for women."

She is the first woman to serve as solicitor general of the United States and earlier, as head of Harvard Law School.

Elena Kagan grew up in New York City, the daughter of a lawyer and a teacher. She attended Princeton University and Harvard Law School. Miz Kagan has extensive experience in the law and government. She worked as a lawyer in the Clinton and Obama administrations. As solicitor general, she argues cases for the United States government before the Supreme Court.

ELENA KAGAN:"I have felt blessed to represent the United States before the Supreme Court, to walk into the highest court in this country when it is deciding its most important cases, cases that have an impact on so many people's lives."

But unlike the other current Supreme Court justices, she has no experience as a judge. She was nominated for an appeals court judgeship in nineteen ninety-nine. But the Senate never voted on her nomination.

Republicans in the Senate say they will ask about her lack of judicial experience during confirmation hearings. Several Supreme Court justices throughout history have had no earlier experience as a judge. Yet Miz Kagan would be the first in almost forty years.

She may also face opposition for an action she took while dean of Harvard Law School. She briefly barred military recruiters from using law school facilities. She said the policy of barring homosexuals from openly serving in the military violated the university's policy against sexual discrimination.

Elena Kagan is Jewish. If confirmed, she would join two other Jewish justices and six Roman Catholics. There would be no Protestant justices for the first time in the Supreme Court's history. Protestants are the country's largest religious group.

Legal experts consider Elena Kagan a moderate nominee. They say this should help her in the confirmation process. Democrats control fifty-nine of the one hundred votes in the Senate.

No date has been set for confirmation hearings by the Senate Judiciary Committee. However, President Obama and Democrats in the Senate hope to have Elena Kagan confirmed in the next few months. Then she could take her seat on the Supreme Court when it meets in October.

And that's IN THE NEWS in VOA Special English, written by Brianna Blake. Transcripts, MP3s and podcasts of our programs are at 51voa.com. I'm Steve Ember.