Update Required To play the media you will need to either update your browser to a recent version or update your Flash plugin.
By VOA
2010-11-10

A program in the eastern United States invites young people into a prison to try to scare them away from prison. The goal is to teach them to avoid bad choices and bad influences that could put them behind bars for life.

Students can take a tour of the prison, in school groups or by themselves. At the end, the young people sit down for a discussion with some of the inmates.

The program is called Prisoners Against Teen Tragedy, or PATT. It takes place at the Maryland Correctional Institution-Hagerstown, a medium-security prison for men. Sal Mauriello is a case specialist there. 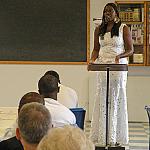 Tomi Dare is a seventeen-year-old student at Hagerstown Community College. She saw an announcement for the contest on her college website. To enter, students had to write about peer pressure and why they do not do drugs. The prize: five hundred dollars for school.

In her essay, Ms. Dare wrote about her own experience growing up as an African-American girl interested in sports.

The scholarship is presented by the Prisoners Against Teen Tragedy program.

Prison spokesman Mark Vernarelli says most teens who visit come to understand what even one bad decision can mean.

MARK VERNARELLI: "A lot of men and women serving life in prison in the state of Maryland didn't pull a trigger or plunge a knife into anybody. They were accessories to a crime. They drove the getaway car. They were with the perpetrator who did the main part of the crime. And yet they got the life sentence as well. "

Prisoners Against Teen Tragedy began in nineteen eighty-eight. PATT is one of Maryland's oldest programs to keep young people from a life of crime. But there are also others.

MARK VERNARELLI: "We found that girls really need special sit-down sessions sometimes more than the boys do, so we have a program for girls only. We have a program that travels across the state, which talks about the dangers of gang affiliation.

"We have an excellent program where the inmates actually lead a tour and they have the children eat the meal in the prison cafeteria with the inmates."

Mark Vernarelli says the Prisoners Against Teen Tragedy also gain from the program. It offers them a chance to help repay society for their crimes, and keep others from following in their footsteps.