Update Required To play the media you will need to either update your browser to a recent version or update your Flash plugin.
By VOA
2011-12-7 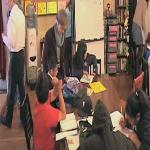 Students write at desks at one of the eight 826 stores.

826 is the name of a non-profit organization that works to help students become better writers by thinking creativity. 826 is also the address of the first centre where this literary arts programme began in 2002. Author Dave Aggers and educator Nenevey Caligary started the programme in California at 826 Valencia street in Fransisco. It now serves 30,000 students through writing and tutoring centers in eight American cities.

826 Valencia street is a fun place for students and visitors. At the front is a pirate supplies store, think of the kind of place where captain Jack Sparrow from "Pirates of the Caribbean" might shop.

Leigh Lehman is the executive director, she says the idea of entering through a pirates store is meant to get students not to think of the place as an education center.

LEIGH LEHMAN: "This is not school; this is not a tutoring center. This is a place for me to be myself and to find my voice and find my creativity and excel."

The goal is to help public school students between six and eighteen years old write creatively. During the day, teachers bring classes on field trips and volunteers help with writing projects. After school, students come for help with creative writing and their school work. Yes, it is a tutoring center.

826 Valencia is located in a mostly Latino neighborhood. Ms. Leemon say many of the children are from immigrant families.

LEIGH LEHMAN: "A lot of the parents don't speak English as a first language so it's harder for them to help their children with school work. So we're trying to provide the services that parents wouldn't otherwise be able to offer their kids for free."

Each 826 center around the country has a different theme – from a pirates store in San Francisco to a store for spies in Chicago.

The National Chief Executive Gerald Richards, says budge cuts in public schools  mean less money for arts education. And, As that goes away, he says, so does the ability for students to use their imagination.

GERALD RICHARDS: "I think there is much more of a focus on science, technology, engineering and math. There's a lot of a focus on testing and a lot of the teaching that's going on in the schools is focusing on the test and passing the test rather than thinking about how do we get kids to think."

Mister Richards points out that thinking creativity is also important in the sciences. And knowing how to write well will help students get to college and beyond.

GERALD RICHARDS: "For jobs and employers and just every subject, it's the ability to communicate well really does open a lot of doors."

Leigh Lehman says 826 builds confidence, Students can publish and sell their work at places like the pirate supplies store and on the Internet.

In 2010, the programs across the country published nine hundred forty-four volumes of student writing.

Ms. Lehman says students are proud when their writing gets published. One of the students in San Francisco  is Sofia Marquez.

SOFIA MARQUEZ: "I get to use my imagination - that's why I like writing."

And that's the VOA Special English Education Report. You can watch a vedio version of this story at 51voa.com. I'm Christopher Cruise.