A Push to Get More Indonesians to Study in US

Update Required To play the media you will need to either update your browser to a recent version or update your Flash plugin.
By VOA
2011-4-13 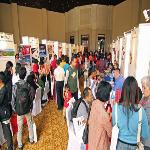 Photo: Puetra Sampoerna Foundation
Students at at an education fair organized by the US Embassy in Jakarta last week

The Obama administration wants to double the number of Indonesians studying in the United States. More than fifty American universities recently attended an education fair in Jakarta. The marketing event was  part of a visit by a top American trade official.

The United States is reaching out to fast-growing economies like Indonesia and Vietnam as new markets for American goods and services. International students put an estimated nineteen billion dollars into the American economy last year.

Last June, the Obama administration set a five-year goal to increase university partnerships and student exchanges with Indonesia. The subjects include agriculture, business and information technology. Micro-scholarships will support intensive language training programs for Indonesians, and for more Americans to study in Indonesians.

Ambassador Scot Marciel says student exchanges create a personal basis for better relations. But he says the United States has to work harder to get more Indonesians to study in America.

SCOT MARCIEL: "We have to do a much better job of A) marketing our universities, which are the best in the world; and B) changing this terrible perception that you can't get a student visa. So I'm literally almost out on the streets grabbing people as they walk by saying, Hey, we'll give you a visa if you go study in America."

Ambassador Marciel says more than ninety percent of Indonesians who request a visa to study in the United States are approved. Still, the number coming to the United States has been falling since the Asian financial crisis in nineteen ninety-eight. Last year, there were fewer than seven thousand. That was a loss of about eight percent from two thousand nine.

More Indonesians have been choosing to study in Australia, Singapore and Malaysia. But the United States still has many of the world's top universities and research centers.

English remains a favorite subject among students from Indonesia. However, many are also choosing business and science.

There is a lot of history behind Indonesia's relationship with America, he says. That is why it needs to be strengthened. But the world's largest Muslim-majority nation also wants to strengthen ties with other countries and with Europe.

Some Indonesian students at the education fair said they are less concerned about where they study than about having enough money to pay for it.

And that's the VOA Special English Education Report. on the web at voaspecialenglish.com. I'm Steve Ember.