Update Required To play the media you will need to either update your browser to a recent version or update your Flash plugin.
By Mario Ritter
2010-6-3 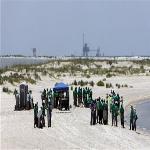 BP is one of the world's largest energy companies. It reported a profit of about six billion dollars in the first three months of this year. That was more than double compared to a year ago.

Now, BP faces growing political pressure over the worst oil spill in American history. Oil has been flowing from its damaged well in the Gulf of Mexico for almost seven weeks.

But the company formerly called British Petroleum also faces growing financial pressure. Investors fear the long-term costs for cleanup, recovery and fines. BP's market value fell more than sixty billion dollars as its share price fell by as much as a third.

On Thursday BP was finally able to cut a damaged pipe at the well using robotic vehicles. The cut was not exactly as hoped, but it was progress. Crews then turned to placing a cap over the pipe -- not to stop it, but to direct at least some of the oil to ships on the surface. The leak is about one thousand five hundred meters under the sea.

Yet it may not be fully controlled before August. Workers are drilling two relief wells in an effort to ease pressure on the damaged well.

The Deepwater Horizon, an oil and gas drilling rig, exploded on April twentieth.

ERIC HOLDER: "The Department of Justice will insure the American people do not foot the bill for this disaster and that our laws will be enforced as much as possible."

By some estimates, the cost of the cleanup could reach thirty-seven billion dollars.

The owner of the rig, Swiss company Transocean, has asked to have its responsibility limited to twenty-seven million dollars. The request is based on a law from eighteen fifty-one. But the Justice Department says that is not enough.

The government could also use violations of other federal laws such as the Clean Water Act to collect money for the spill.

Oil has already reached more than one hundred kilometers of coastline in Louisiana, Mississippi and Alabama. And it threatens the west coast of Florida.

Areas of the Gulf have been closed to fishing. But job losses in the fishing industry are not the only worry. The Atlantic hurricane season officially began Tuesday. Some people worry that officials could take their land if it becomes polluted by oil in a storm.

ONE RESIDENT: "If it gets on land, will they make us leave?"
ANOTHER RESIDENT: "If we have a hurricane and the oil washes over the land, they will condemn it. We'll lose our homes, we'll lose everything."