Update Required To play the media you will need to either update your browser to a recent version or update your Flash plugin.
By VOA
2011-11-25 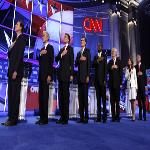 One issue was American aid to Pakistan. Texas Governor Rick Perry said he would cut that aid unless the Pakistani government made changes.

RICK PERRY: "The bottom line is that they have showed us time after time that they can't be trusted and until Pakistan clearly shows that they have America's best interest in mind, I would not send them one penny."

Representative Michele Bachmann of Minnesota disagreed. She said the aid is required to secure Pakistan's nuclear weapons. She also said Pakistan shares intelligence with the United States about al-Qaida.

MICHELE BACHMANN: "Whatever our action is, it must ultimately be about helping the United States and our sovereignty, our safety and our security.''

Another question was whether, as president, the candidates would support an Israeli attack to prevent Iran from developing nuclear weapons. Businessman Herman Cain gave the first answer.

HERMAN CAIN: "I would first make sure that they had a credible plan for success."

Newt Gingrich, former speaker of the House of Representatives, said he would support military action against Iran only as a last choice.

MITT ROMNEY: "Put in place the kind of crippling sanctions that stop their economy. I know it is going to make gasoline more expensive. There is no price that is worth an Iranian nuclear weapon."

During the debate, former Utah Governor Jon Huntsman said it was time for most American troops to come home from Afghanistan.

JON HUNTSMAN: "We haven't done a very good job defining and articulating what the endpoint is in Afghanistan and I think the American people are getting very tired about where we find ourselves today."

Mitt Romney said he opposed a quick withdrawal and, as president, would follow the advice of his military commanders.

MITT ROMNEY: "This is not time for America to cut and run."

Most of the candidates said they supported the extension of the anti-terrorism law known as the Patriot Act. However, Representative Ron Paul of Texas said the law is "unpatriotic because it undermines our liberties."

Several of the presidential hopefuls warned against deep defense cuts. That could happen now that a twelve-member "supercommittee" in Congress failed to agree on long-term deficit reductions.

Another issue was illegal immigration. Mr. Gingrich disagreed with many of the other candidates. He said he was "prepared to take the heat in saying: Let's be humane in enforcing the law."

NEWT GINGRICH: "I don't see how the party that says it's the party of the family is going to adopt an immigration policy which destroys families that have been here a quarter century."

This week, Newt Gingrich took the lead in national opinion polls for the first time in the race for the Republican nomination. Mitt Romney was a close second, and Herman Cain was third.

The nationally broadcast debate this week was the eleventh so far among the Republican candidates. The first voting in the primary season will take place on January third. On that day, Iowa will hold its political meetings known as caucuses. The general election is next November.