Update Required To play the media you will need to either update your browser to a recent version or update your Flash plugin.
By Jerilyn Watson
2011-1-31

FAITH LAPIDUS: Researchers are testing stem cells from children to treat health problems they possess because of damage to the body's nervous system. The stem cells were recovered when the children were born. The researchers hope to learn if the cells can improve the quality of life for these boys and girls.

An American study showed that children can safely receive their own cord blood stem cells. The study was completed at the Duke University Medical Center in Durham, North Carolina. The cells came from blood in umbilical cords. Umbilical cords connect babies to their mothers during pregnancy. Collection of the cells is done at birth and is painless.

A baby's umbilical cord traditionally has been thrown away as medical waste. But saving the stem cells from blood in the cord has become more common in recent years. Most parents who do this have healthy babies. They want the cells kept should the child later suffer an accident or health problem.

CHRISTOPHER CRUISE: Studies have shown that stem cells can divide continually and become other kinds of cells or tissue. They may move to destroyed cells and take control of their duties. The result may help basic abilities like seeing, hearing, and walking in children with nervous system damage.

Joanne Kurtzberg is chief of the Blood and Marrow Transplantation Center at the Duke University Medical Center. Dr. Kurtzberg has been studying stem cells for about thirty years. She and her team investigated whether cord blood stem cells can help patients -- and which patients they help. 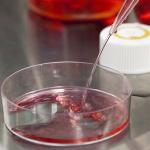 FAITH LAPIDUS: Patients from all over the world travel to North Carolina to take part in Duke University studies. Doctor Kurtzberg and her team have been studying babies suffering from the effects of hypoxic ischemic encephalopathy. The word hypoxic means reduced oxygen for, in this case, the body's cells and organs. Ischemic means not enough blood reaches the organs. Encephalopathy describes problems with the workings of the brain. Severe HIE can prevent normal development.

Another study at Duke is accepting young children who have what is called spastic cerebral palsy. The patients are between the ages of one to six years. Experts debate how to define cerebral palsy. The condition can result from injury to the developing brain.

CHRISTOPHER CRUISE: Bleeding in the brain, stroke or HIE can cause the injury. The baby can be injured while still in the mother's uterus, at birth or later.

Severe cases limit muscle operation and body movement. Normal breathing and eating can be affected. So can talking, seeing, hearing, walking and learning.

Trained therapists may be able to help reduce a child's physical or mental limitations. But there is no cure at this time. And the emotional and financial costs of caring for a severely affected child can be huge. Still, current scientific work may offer hope.

FAITH LAPIDUS: The Duke study with child cerebral palsy patients is a clinical test. Young patients from anywhere in the world may take part if they meet the study's medical requirements.

All the patients will receive cord blood stem cells, but at differing times. The children will also receive placebos -- harmless substances that cannot help. Placebos are used to make sure the stem cells are not mistakenly believed to be helping when other reasons are responsible.

All the patients will be repeatedly measured for progress at set times. Doctor Kurtzberg says these measurements will give carefully structured answers as to whether the treatment is helping their conditions.

CHRISTOPHER CRUISE: Some families involved in her earlier research reported progress in their children after they received their own stem cells. For example, Sasha Browne is a pre-school British girl who lives with her family in Dubai. Her father, Richard, works for a British building company.

He and her mother, Tania, paid to store stem cells from Sasha's umbilical cord blood when the little girl was born. Tania Browne said they did this, in her words, just in case. They remembered the stored cells when Sasha began to have health problems.

Sasha received her stem cells through an infusion more than a year ago. During an infusion, stem cells enter the body through a vein leading back to the heart. No operation is involved.

FAITH LAPIDUS: Tania Browne believes her daughter shows great improvement since receiving the cells. Missus Browne reports that therapists helping Sasha say she now walks much better. And a doctor planning to correct the little girl's eye problems delayed the operation. The doctor had said Sasha might no longer need it.

Doctor Kurtzberg and her team have also observed improvement in their patients. But she says it must be shown scientifically that cord blood stem cells cause improvement, and not other reasons.

Researchers at the Medical College of Georgia in the United States are also working to learn if stem cells can help children with cerebral palsy. Doctor James Carroll leads the Georgia research team. He heads the first-ever clinical trial of umbilical cord stem cells with cerebral palsy patients.

CHRISTOPHER CRUISE: The World Health Organization says it has reached a limit in its fight against diseases and disasters. Director-General Margaret Chan says the agency is "overextended" and faces, in her words, serious funding shortfalls. Dr. Chan says the WHO is no longer operating at the level of top performance that is increasingly needed, and expected.

FAITH LAPIDUS: Dr. Chan said one of the most exciting developments recently is a new vaccine that could end Africa's deadly meningitis epidemics. She said no large drug company wanted to develop the vaccine because it would not bring big profits. So a group of researchers developed it with major support from the Bill and Melinda Gates Foundation.

The WHO chief warned that a shortage of money could limit progress in other areas. She said public health has been on what she called "a winning streak." She noted the meningitis vaccine, new vaccines for preventing diarrheal disease and pneumonia, and a new test for tuberculosis. But she questioned whether there are enough resources to support, if not speed up, these gains.

CHRISTOPHER CRUISE: Most science and engineering contests for young people take place in a big room, with all the competitors present. But the Google Science Fair is a non-traditional competition. Students do not have to travel anywhere to enter. They can use the Internet to present their projects from anywhere in the world.

Public and private school students ages thirteen through eighteen can take part in the contest. They may enter projects in physics, biology and other subjects. Or they can demonstrate inventions. The entries are to be built and then presented to judges through the Internet.

FAITH LAPIDUS: The inventor of the Segway electric human transporter, Dean Kamen, is a judge at the Google Science Fair. He says it is easy to take part in the competition.

DEAN KAMEN:"All you need to participate is access to the Internet and imagination."

FAITH LAPIDUS: Competitors have until April fourth to register for the contest. Judges will announce top winners and experiments in several age groups on July eleventh.

Mr. Kamen says the winners will receive some exciting prizes. Among them, there is a ten-day trip to the Galapagos Islands. Another is a visit to the CERN High Energy Laboratory in Geneva, Switzerland.

CHRISTOPHER CRUISE: Google will give one hundred thousand dollars in financial aid for education. The company will also organize internships, which are periods of study and work with professionals in top entrants' fields of interest.

FAITH LAPIDUS: This SCIENCE IN THE NEWS was written by Jerilyn Watson. Our producer was June Simms. I'm Faith Lapidus.

CHRISTOPHER CRUISE: And I'm Christopher Cruise. Join us again next week for more news about science in Special English on the Voice of America.