Robert Frost, 1874-1963: Celebrating National Poetry Month with One of America’s Most Famous Poets

Update Required To play the media you will need to either update your browser to a recent version or update your Flash plugin.
By Richard Thorman
2011-4-9 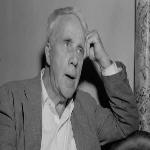 Robert Frost was forty years old before Americans began to read his poems and praise them.

STEVE EMBER: In nineteen sixty-one, John Kennedy was sworn in as president of the United States. He asked one of America's best known poets to recite a poem. Robert Frost stood in the cold sunlight that day, his white hair blowing in the wind. He had written a poem especially for the inauguration.

But the sun's bright reflection on the snow was blinding and he could not see his notes. So instead Frost recited another of his poems, "The Gift Outright," from memory. Here is a studio recording of Robert Frost reading that poem.

The land was ours before we were the land's.

She was our land more than a hundred years

Before we were her people. She was ours

In Massachusetts, in Virginia,

But we were England's, still colonials,

Possessing what we still were unpossessed by,

Possessed by what we now no more possessed.

Something we were withholding made us weak

Until we found out that it was ourselves

We were withholding from our land of living,

And forthwith found salvation in surrender.

Such as we were we gave ourselves outright

(The deed of gift was many deeds of war)

To the land vaguely realizing westward, 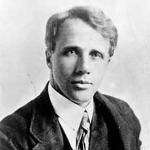 FAITH LAPIDUS: Robert Frost was one of America's best known and most honored serious writers. But his fame came late in his life. He was forty years old before Americans began to read his poems and praise them. Once his fame was established, however, it grew stronger and stronger during the rest of his long life.

His success came from uniting traditional forms of poetry with American words, spoken in a clearly American way.

STEVE EMBER: Frost used the same speaker for many poems, so the separate poems formed a larger unity. He created this speaker carefully. He felt that his readers would believe his poems if he put the words into the mouth of a wise person who lived in the country, not the city.

FAITH LAPIDUS: Robert Frost is always linked to the land of cold winters in the northeastern United States, the area called New England. Yet he came from the other side of the country, San Francisco, California. He was born there in eighteen seventy-four. He lived in California during his early childhood.

This man who was born in the West and became linked with New England was named for the chief Southern general in America's Civil War. The general's name was Robert Edward Lee. The poet was named Robert Lee Frost, because his father wanted to honor the general.

Someone once asked another American writer, Ernest Hemingway, how to become a writer. The best thing, he said, was to have an unhappy childhood. If this is true, Robert Frost's childhood was unhappy enough to make him a very good writer.

STEVE EMBER: Robert Frost's father was a reporter who wanted to be a politician. He often drank too much alcohol and became angry. Robert was the victim of his anger. Robert's mother tried to protect him from his father's anger. Some people think she protected him too much. As a child, Robert was afraid of the dark. All his life he suffered from imaginary sicknesses. He was eleven when his father died.

FAITH LAPIDUS: Robert's mother was from New England. After her husband died, she moved back there. She supported her children by teaching school. Yet she got more enjoyment from reading and writing poetry.

Robert Frost finished high school in eighteen ninety-one. He and a girl, Elinor White, had the best record of the students graduating that year. He married Elinor three years later. She rejected him at first, but finally agreed to marry him. This rejection led to a lack of trust in their marriage. It made Frost say this: "I could lose everything and not be surprised." 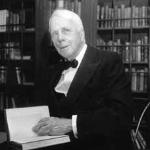 STEVE EMBER: After high school, Robert's grandfather offered to pay his costs at Dartmouth College. But Robert left the school after a few months. He did not like it. He spent the next few years working at different jobs. At one time, he worked in a factory. Later, he repaired shoes. He was a teacher. He was a reporter. Always, he wrote poetry.

FAITH LAPIDUS: Robert Frost attended Harvard University for two years. After that, he returned to the many jobs he held before. And he continued to write poetry. He said that until nineteen thirteen, he earned only about ten dollars a year from writing.

For a while, Frost tried to take care of a farm in the state of New Hampshire. He was not a successful farmer. During this time of working and travelling from job to job, he and his wife had four children. Since he earned very little money, his family was always poor.

STEVE EMBER: Robert Frost saw himself becoming more and more like his father, treating his family badly. He became very unhappy with himself and with his life. He even thought about ending his life. In nineteen twelve, he decided to try to make a new start. He took his family to Britain. The cost of living was low. And there was an interest in what was then called a "new poetry."

In Britain, Frost found a publisher for his first book of poems. The book was called "A Boy's Will." When it appeared in nineteen thirteen, Frost received high praise from British readers. Praise was something he had not received in his own country.

Ezra Pound, another American poet living in Britain, read the poems and liked them very much. He wrote a magazine article about Frost. He also helped get Frost's second book of poems published in America. That book was called "North of Boston."

FAITH LAPIDUS: Many readers consider "North of Boston" to be Frost's best book of poems. In Britain, it was praised even more than his first book. Readers saw the way he took simple material and built a world of new meanings. They saw the way he spoke with a voice that sounded like common speech.

What they failed to see were the differences Frost found between what was seen and the person doing the seeing. This was what he called "the outer and inner weather." 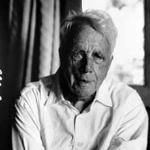 As he grew older, Robert Frost's idea of the world became more difficult

In nineteen fifteen, both of Frost's books were published in the United States. He felt that his books had "gone home," and he should go home, too. When he reached America, he was surprised by the praise he received and the acceptance of American publishers.

In the words of the poem he read at President Kennedy's inauguration many years later: "The land was his before he was the land's."

STEVE EMBER: When Robert Frost returned to America from Britain, he bought another farm in New Hampshire. To feed himself and his family, he depended on the sales of his books and papers. He also earned money by speaking at universities.

Success did not ease his life. And it did not change the way he thought and acted. The gentle, wise person who spoke from his poems was the man Frost wanted to be. He knew, however -- and his family knew -- he was not that man.

Tragic events affected him. His son killed himself. His wife was often sick, and his daughter became mentally ill. Frost, too, suffered from his own imaginary sicknesses. Through his poems, however, he lived a different life.

FAITH LAPIDUS: Frost was a worker in words, a craftsman. He tried to capture exactly the speech of the people of New England. He used simple descriptions that were easily understood. He talked about simple, natural things: trees, the weather, the seasons, night and day. In an early poem he wrote:

I'm going out to clean the pasture spring;

I'll only stop to rake the leaves away

(And wait to watch the water clear, I may):

I'm going out to fetch the little calf

That's standing by the mother. It's so young,

It totters when she licks it with her tongue.

STEVE EMBER: Robert Frost said that reading his poems should begin with pleasure and end in wisdom. Yet as he grew older, his simple idea of the world became more difficult. His world was more touched with sadness. He wrote more about fear, about being alone, about losing whatever he had. We will continue our story of American poet Robert Frost next week.

STEVE EMBER: And I'm Steve Ember. Our programs are online with transcripts and MP3 files at 51voa.com. And you can find us on Facebook and YouTube at VOA Learning English. Join us again next week for PEOPLE IN AMERICA in VOA Special English.