Ronald Reagan, 1911-2004: Remembering One of America's Most Popular Presidents on the 100th Anniversary of His Birth

Update Required To play the media you will need to either update your browser to a recent version or update your Flash plugin.
By Caty Weaver
2011-2-5 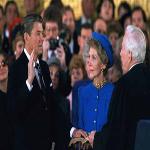 First Lady Nancy Reagan watches as President Ronald Reagan is sworn in for a second term during ceremonies at the Washington Capitol.

BARBARA KLEIN: Welcome to PEOPLE IN AMERICA in VOA Special English. Today Gwen Outen and Steve Ember tell about America's fortieth president, Ronald Reagan. Experts say Ronald Reagan re-defined the American presidency during his two terms in the nineteen eighties. He became president when he was sixty-nine years old. It was a far different place from that of his birth on February sixth, nineteen eleven.

GWEN OUTEN: Ronald Wilson Reagan was born in Tampico, Illinois. His mother Nelle, father Jack, and brother Neil lived above a bank in the town. Ronald Reagan's family began calling the baby "Dutch." The nickname remained for the rest of his life.

Jack Reagan worked at a general store. The family was poor. Yet, in a book about his life, Ronald Reagan wrote that he never felt poor. He was good at sports, especially football. During the summers, he was a lifeguard at a local swimming pool. He reportedly rescued many people from drowning.

Ronald Reagan said there was a feeling of security throughout his childhood. But it was not perfect. His father was dependent on alcohol.

STEVE EMBER: Ronald Reagan studied at Eureka College in Illinois. After seeing a play at college, he said: "More than anything in the world, I wanted to speak the actor's words."

But Ronald Reagan did not have enough money to go to New York or Hollywood to become an actor. So, after college he found a job as a sports broadcaster for a radio station in Iowa. Later he moved to a bigger radio station in Chicago, Illinois. He announced the action of baseball games. 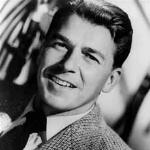 Before he became president, Ronald Reagan was an actor.

This work took him on a trip to California. He took a screen test to become an actor. Warner Brothers Studios offered him a job.

Ronald Reagan moved to Hollywood and became a movie star. He appeared in many movies. "Knute Rockne – All American," is probably his most famous. It is where he got the nickname "the Gipper."

Mr. Reagan played George Gipp, one of the greatest college football players ever. In the movie, he speaks of the school's football team as he is dying.

FROM KNUTE ROCKNE – ALL AMERICAN:

"...ask them to go in there with all they got, win just one for the Gipper."

GWEN OUTEN: Those words, "win one for the Gipper," later became a political battle cry for Ronald Reagan. In nineteen forty, he married actress Jane Wyman. They had two children, Maureen and Michael. But the marriage ended in nineteen forty-nine.

Ronald Reagan became president of the main labor group for movie actors in nineteen forty-eight. He served six terms. He met actress Nancy Davis through the union. They married in nineteen fifty-two. They later had two children, Patti and Ron.

At this time, Ronald Reagan was a member of the Democratic Party who described himself as a liberal. But, he became increasingly conservative as his worries about communism grew. He opposed anyone in the movie industry who supported communism.

STEVE EMBER: In the early nineteen fifties, Ronald Reagan began to appear on television. He presented dramatic shows produced by the General Electric Company. He became a spokesman for the company. Mr. Reagan learned a lot about public speaking. He began to campaign for Republican Party political candidates a few years later. Reagan developed the ability to reach people through his speeches. He later became known as "The Great Communicator."

In nineteen sixty-six, Ronald Reagan announced his own candidacy for governor of California. Democrats in the state did not think he was a serious candidate. However, Mr. Reagan was elected governor by almost one million votes. 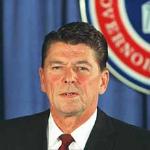 Ronald Reagan speaks during the National Governor's Conference in Washington in 1969.

Ronald Reagan received mixed public opinion as governor of the nation's most populated state. He was praised for lowering California's debt, yet criticized for raising taxes. Voters re-elected him as governor in nineteen seventy.

GWEN OUTEN: Ronald Reagan was unsuccessful in his first two attempts to win the Republican nomination for president. Then, in nineteen eighty, he became the Republican Party's presidential candidate. His opponent was President Jimmy Carter.

The two men debated on national television. Ronald Reagan spoke directly and simply to the American people and asked them some questions:

STEVE EMBER: Ronald Reagan won the United States presidential election by a huge majority. He and his vice-president, George Herbert Walker Bush, were sworn into office in January, nineteen eighty-one. Many people called the change in political power "The Reagan Revolution."

President Reagan immediately began to work to honor a major campaign promise. He called on Congress to lower taxes. But only two months later, tragedy struck. A mentally sick man shot the president and three other people outside a hotel in Washington. President Reagan and his press secretary, James Brady, were severely wounded.

Mr. Reagan had a bullet in his left lung, close to his heart. But he showed his sense of humor at the hospital. As the president was taken into the operating room he said he hoped all the doctors were Republicans.

Ronald Reagan recovered from the shooting and returned to work within two weeks.

GWEN OUTEN: The president now began work on his main goal to reduce the size of the federal government. He had campaigned on the idea that the government was too costly and interfered too much in the lives of Americans.

Mr.Reagan and Congress reduced taxes and cut spending for social programs. The administration argued that these actions would create economic growth.

Extremely high inflation rates did begin to fall. But the United States' debt rose sharply. This was partly from big increases in military spending. 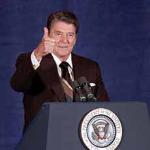 President Ronald Reagan gives a thumbs up sign during a 1985 speech in Oklahoma City.

The Reagan economic policy became known as "Reaganomics." It had, and still has, supporters and opponents. Some people argued that the cuts in social programs greatly hurt poor people. Others said the policy improved the economy.

STEVE EMBER: President Reagan dealt with many serious foreign issues while in office. He sent American Marines to Lebanon to stop the fighting among several opposing groups. But more than two hundred Marines were killed in an extremist bomb attack. The so-called "Reagan Doctrine" was the Administration's most famous foreign policy. That policy was to support anti-communist forces anywhere in the world. Under the policy, American forces invaded the Caribbean island nation of Grenada. The policy also led to secret United States support for rebels in Nicaragua.

GWEN OUTEN: Some historians say Ronald Reagan helped cause the fall of the Soviet Union. They say his military spending forced the Soviets to spend more, too. They say this led to the communist nation's economic failure.

President Reagan enjoyed very high public approval ratings throughout his presidency. Many Americans considered him a friendly leader, a "man of the people," filled with hope for America.

STEVE EMBER: Ronald and Nancy Reagan returned to California after his second term ended in nineteen eighty-nine. In nineteen ninety-four, Mr. Reagan wrote an open letter to the American people. He informed them that he had the brain disease Alzheimer's. The former president expressed his love for the country and thanked Americans for letting him serve. And, he wrote: "I know that for America there will always be a bright dawn ahead."

Ronald Reagan died at his home in California on June fifth, two thousand four. He was ninety-three.

STEVE EMBER: And I'm Steve Ember. Listen again next week for another PEOPLE IN AMERICA in VOA Special English.