Update Required To play the media you will need to either update your browser to a recent version or update your Flash plugin.
By George Grow
2011-11-12 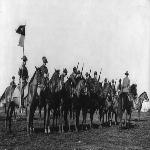 PHOEBE ZIMMERMAN: And I'm Phoebe Zimmermann with the VOA Special English program, People in America. Today, we tell the story of Sam Houston. He was a congressman, senator, governor, president of the Republic of Texas and a hero.

STEVE EMBER: The United States was seventeen years old when Sam Houston was born in Virginia in seventeen-ninety-three. His father was a soldier during the Revolutionary War. After the war, he served as an officer in the state military forces of Virginia. Sam's mother took care of the family farm while her husband was busy with his duties.

Sam's father died when the boy was fourteen years old. Sam's mother had to sell the farm to pay the money her husband owed. She and the children moved west to Tennessee.

PHOEBE ZIMMERMAN: Life in Tennessee was not easy. Missus Houston and her children had to build a house and clear trees off the land. Sam did not like such hard work. His mother and brothers decided that the boy was not meant to be a farmer. They sent him to a store to work. Sam did not like this job any better than farming. One morning, he failed to go to work. Sam was gone for weeks.

Then his mother heard that he was living with the Cherokee Indians. Sam's brothers found him at an Indian village. Sam refused to leave. He told his brothers that he loved the way the Indians lived.

The Cherokee chief, Oolooteka, accepted Sam as his son. Sam was nineteen years old when he left the Indians to return to his own people.

STEVE EMBER: The United States and Britain had begun fighting the War of Eighteen-Twelve and Sam Houston wanted to fight for his country. He left to join the forces of General Andrew Jackson.

Houston fought in a battle against a group of Creek Indians who supported the British. He was wounded in the leg. Later in the fighting, General Jackson asked for someone to lead an attack against the Indians. Houston jumped up and led the attack. He was hit by several bullets, and almost died.

It was a long time before Houston was well again. The war ended before he could return to action. After several years as a peacetime soldier, the young officer received special orders from Washington, D.C. Some Cherokee chiefs had signed a treaty with the United States. The treaty said that all Cherokees must move west, to an area across the Mississippi River.

PHOEBE ZIMMERMAN: Oolooteka, with whom Houston had lived, was not one of the chiefs who signed the treaty. He could not understand why he should honor the agreement. Houston's job was to get Oolooteka to accept the treaty. Houston did not want to do this. He believed it was wrong. However, he also knew it was a soldier's duty to obey orders.

The Cherokees were glad to see Sam return. But they were sad when they learned why he had come. After much talk, Oolooteka finally agreed to leave the land. Houston had done his duty, but he was not pleased. Because of this and other reasons, he left the army when he was twenty-five years old.

He opened a law office in a town near Nashville. Former General Andrew Jackson lived near the city, and Houston visited him often. They became close friends. Jackson was the political leader of Tennessee. He urged his young friend to enter politics. Houston accepted this invitation.

Jackson's support meant much to a political candidate in Tennessee. Houston was elected to the United States House of Representatives. He served in Congress for four years.

Then, Andrew Jackson was elected president of the United States and Houston was elected governor of Tennessee. Houston had worked hard for Jackson. Many people believed that Houston would follow Jackson as president. Sam Houston is pictured here in 1848

PHOEBE ZIMMERMAN: But Houston had something else on his mind -- a young woman. She was Eliza Allen, the daughter of a friend. They decided to marry. For several months, they seemed happy. Then, something happened. Eliza left Sam and returned home. Houston never explained the reason for the break between them. He said only that it was painful and private. Houston resigned as governor and left Tennessee.

STEVE EMBER: Sam Houston traveled to Arkansas, where the Cherokee Indians were living. Chief Oolooteka welcomed him warmly. Houston attempted to forget his sadness by working hard. But work did not make him forget. Houston drank too much alcohol, and was drunk for months.

Then he got a letter telling him his mother was sick. Houston went home. Before she died, Missus Houston told her son that she was sure of his strength and that he would succeed in life.

PHOEBE ZIMMERMAN: Houston had received a letter from a group of New York City bankers. They wanted him to go to the western area called Texas. Houston liked this idea. Many Americans had been moving to Texas for the past few years. The area was then part of Mexico. However, the Mexican government had opened the area to Americans who wished to live there.Houston talked to the bankers, but got no immediate decision from them. He went to Washington to see President Jackson. The President offered him a job. He asked his friend to go to Texas to negotiate peace with the Comanche Indians.

STEVE EMBER: Houston moved to Texas in eighteen-thirty-two. He met with the Indians. The talks were successful, and the Indians agreed to have peace.

People told him that a spirit of rebellion was spreading across Texas. The Mexican government had made a number of laws that the Texans did not believe were fair. Houston went to San Felipe de Austin, the capital of a colony of Americans. Stephen Austin had started the colony with Mexico's permission and worked hard to make it a success.

Austin feared that Houston had come to lead a struggle against Mexico. Austin did not believe that a war was necessary. He thought new leaders would come to power in Mexico. He believed they would make changes in the laws. Austin was partly right. The Mexican dictator, Anastasio Bustamante, was ousted. General Antonio Lopez de Santa Anna seized power.

A old picture of the entrance to Fort Sam Houston

PHOEBE ZIMMERMAN: The Texans called a meeting to write a letter to Santa Anna. They asked him to change the cruel laws ordered by Bustamante. Austin agreed to carry the letter to the new Mexican leader. Months after Austin left, the Texans learned that he had been arrested in Mexico City and put in prison. They now felt that Santa Anna was no better than Bustamante.

Finally, the Mexican leader freed Austin and let him return to Texas. Austin now believed that peaceful methods would not help the Texans.

STEVE EMBER: The Texans held another meeting. There was a deep split among the delegates. Many believed the only answer was complete independence from Mexico. Others believed Texas should fight for a democratic Mexican government. After much debate, the delegates decided to try to keep Texas a Mexican state. They quickly wrote a new state constitution and agreed to meet again. A temporary governor was elected. Sam Houston was chosen commander-in-chief of the Texas Army.

There was little time to get an army ready. Santa Anna's forces already were in Texas, in San Antonio. A group of Texas volunteer soldiers wanted to go to San Antonio to fight the Mexicans.

Houston opposed this idea. He believed the soldiers needed more training. However, the volunteer soldiers left for San Antonio. There was a violent five-day battle. The small Texas force won a surprise victory.

PHOEBE ZIMMERMAN: Most Texans believed the war had been won. But Houston knew Santa Anna would not give up Texas so easily. Houston continued to build an army.

Several Texas officers formed a small army and planned to attack Mexico without Houston's permission. He believed the planned attack on Mexico was wrong, so he resigned. But before he did, he ordered Texans in San Antonio to destroy the old Spanish fort called the Alamo. Houston did not think the Alamo could be defended against a strong Mexican attack. That will be our story next week.

PHOEBE ZIMMERMAN: And I'm Phoebe Zimmermann. Join us again next week for another People in America program on the Voice of America.