Saving a School, and Its History

Update Required To play the media you will need to either update your browser to a recent version or update your Flash plugin.
By VOA
2011-10-5 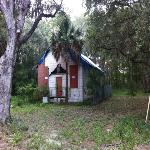 The Harrington School is an old one-room schoolhouse in the American state of Georgia. The building has not been used in years. Community leaders and even the local historical society lost hope that it could be saved.

AMY ROBERTS: "They said that the building just wasn't worth saving, and you could just look at it and tell that it was going to fall any minute, so let's tear it down."

Amy Roberts has good memories of the school. She attended first grade there in nineteen fifty-three. That was a year before the United States Supreme Court ruled that schools had to be racially integrated. A number of states kept blacks from attending school with whites.

The Harrington School was built in nineteen twenty-five for black children on St. Simons Island. After the ruling, the children joined white students at St. Simons' other elementary school.

The old schoolhouse continued to be used for social activities and a day care center. By nineteen seventy, however, it stood empty. Amy Roberts worried that developers might tear it down. So she started the African-American Heritage Coalition to try to save it.

AMY ROBERTS: "If it's not done, if it's not saved, then eventually you would not know that we existed here on St. Simons. Everything of African-American heritage has been torn down."

In two thousand nine the Harrington School was weeks away from destruction. Then a local historian named Patty Deveau took a closer look. She remembered a movement called the Rosenwald Fund.

Julius Rosenwald was a businessman. In nineteen fifteen he donated money to black communities to build their own schools. Georgia historian Jeanne Cyriaque explains.

JEANNE CYRIAQUE: "At the very core of that movement was the involvement of the community, sympathetic whites and philanthropy, merging together to do what today we'd call partnerships."

By the late twenties, the Rosenwald Fund had donated to more than five thousand educational buildings in fifteen states across the South. One-third of rural black children were attending a Rosenwald school.

There are no records of whether Harrington was a Rosenwald school. But Jeanne Cyriaque says it represents what the fund was trying to do.

Now, preservation architects are developing plans to restore the Harrington School. Amy Roberts and others were surprised by what the experts found when they inspected the structure.

AMY ROBERTS: "And they went through it and they talked about how sound it was and how, you know, I mean, they'd never seen anything like this. I mean, it was, like, in great shape!"